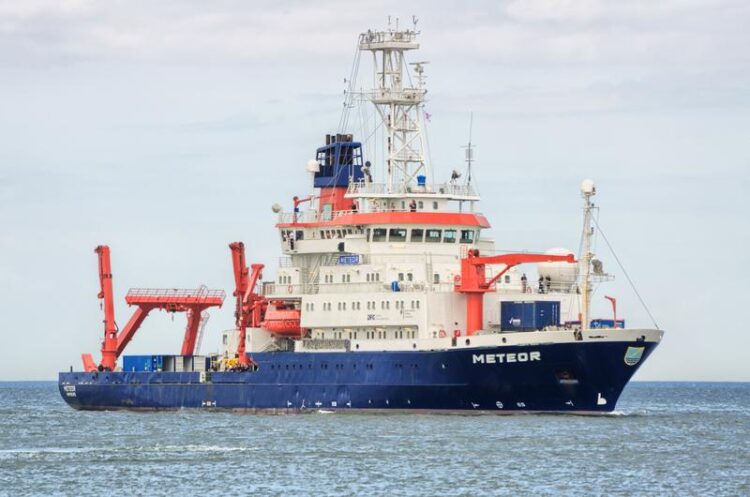 Today, a seven-week expedition of the research vessel METEOR set out to investigate matter fluxes and food webs in the Amazon river plume.
R. Prien / IOW

As the world’s largest river, the Amazon contributes about one-fifth of the global freshwater input to the ocean, and its river plume, which extends thousands of kilometres into the tropical North Atlantic, influences diverse ecosystems there. To better understand the fate of this gigantic river plume from its mouth to open ocean expanses and its influence on plankton food webs, the research vessel METEOR is embarking on a seven-week expedition from the Spanish island Las Palmas on April 12. The international research team, led by the Leibniz Institute for Baltic Sea Research Warnemünde (IOW), will focus in particular on the matter fluxes of the important element nitrogen.

Inputs of nutrients and trace elements by rivers are essential for life in the ocean and the composition of plankton communities. This is all the more true for the Amazon, which is fed by the largest catchment area in the world and which has a decisive influence on productivity and matter fluxes in the western tropical North Atlantic.

“We often refer to the Amazon region with its rainforests as the ‘lungs of the earth’, playing a key role in the global carbon cycle and contributing to around 15 % of global photosynthesis. Much less recognised is the fact that the river’s gigantic water masses – it could fill the entire Baltic Sea with its 21,631 km³ in just four years – carry large amounts of organic material and nutrients that originate from the soils of the catchment area and fertilize the ocean. These nutrients boost marine phytoplankton production there and thus the binding of the greenhouse gas CO2,” says Prof. Maren Voß from the IOW, explaining the immense significance that the huge South American river unfolds not only on land but also in the sea.

“Previous studies suggest that the most important sink of carbon dioxide is in the zone of the river plume that extends far into the Atlantic and where plankton development is nitrogen-limited,” Voß continues. It is completely unclear, however, how the zooplankton is feeding in the Amazon estuary, where due to turbidity hardly any light for photosynthesis enters the water, which may be causing plankton growth limitation there. “That’s why the main focus of our expedition lies on nitrogen and its compounds, as well as the turnover and uptake processes of nitrogen compounds by phytoplankton and zooplankton, and the role of detritus in the turbid near-shore area of the river plume,” says the marine biologist.

Maren Voß is an expert in marine nitrogen cycling and the chief scientist of METEOR expedition M174 titled “N-Amazon”, which will study the Amazon River plume as part of the project MeN-ARP (short for “Metabolism of Nitrogen in the Amazon River plume and Western Tropical North Atlantic”) funded by the German Research Foundation. Dr. Nathalie Loick-Wilde, zooplankton expert at IOW and MeN-ARP project leader, is accompanying the expedition as deputy scientific chief. The interdisciplinary 22-member expedition team, which includes 15 IOW experts as well as researchers from Bremen, Switzerland and the USA, will be on board until May 30. During about 25 working days in the research area off the Amazon estuary, 56 sampling stations will be visited and various experiments will be carried out directly on board. The research cruise’s port of destination is Emden in Germany.

In addition to charting the extent of the river plume and investigating physical mixing processes of river water and seawater, the work program will address various aspects of
nitrogen fluxes in planktonic communities, ranging from bacteria and phytoplankton as the basis of the food web to zooplankton.

“There are three major habitat types along the river plume: the estuary, the mesohaline and the oceanic region. We expect the plankton communities along the river plume to change, both in their species composition and in terms of their functional diversity and metabolic rates,” explains Voß. This will be investigated through sampling of the plankton as well as through experiments with natural plankton communities, in which the uptake of nutrients and the fluxes within the nitrogen cycle will be measured by using marker substances. These experiments are complemented by analyses of feeding relationships in zooplankton using isotope measurements of amino acid nitrogen. “To date, no such extensive incubation experiments with different nitrogen markers have been conducted for this region of the Atlantic Ocean and the coast of Brazil,” Voß says.

Water sampling for extensive macro- and micronutrient analysis and the taking sediment cores, which will be used to determine nutrient releases from the seafloor, round out the scientific program.

“We already have evidence that human impacts such as climate change and massive deforestation in the Amazon catchment are causing serious changes in this complex system. This is why it is so essential that we understand all these processes and thus the role of the Amazon’s discharges for the productivity of the western tropical North Atlantic as well as possible,” concludes expedition leader Maren Voß, explaining a key concern of the research cruise.

The IOW is a member of the Leibniz Association that connects 96 independent research institutions that range in focus from natural, engineering and environmental sciences to economics, spatial and social sciences and the humanities. The institutes are jointly financed at the state and national levels. The Leibniz Institutes employ a total of 20,000 people, of whom 10,000 are scientists. The total budget of the institutes is 1.9 billion Euros. http://www.leibniz-association.eu