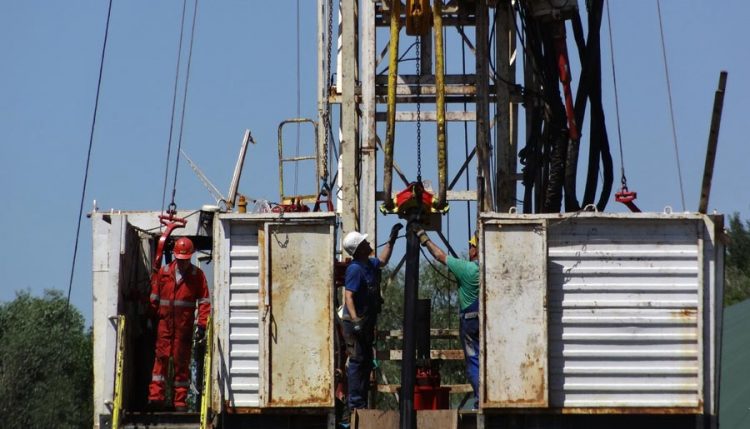 04.07.2015: Today the final phase of the project on the geological storage of the greenhouse gas carbon dioxide at Ketzin/Havel started with the abandonment of the first of five wellbores.

After successful completion of the active injection and the monitoring phase the final project phase termed COMPLETE will now stepwise abandon all wellbores of the pilot site according the regulations set by the German mining law. With this the pilot project on the geological storage of the greenhouse gas CO2, which is operated by the GFZ German Research Centre for Geosciences, now enters its terminal phase.

The well abandonment is completed by deconstruction of the wellbore cellar and its foundation. „The now started work will provide first-hand results on the safe abandonment and closure of a CO2 storage site that are also internationally unique“, explains Axel Liebscher, Head of the Centre for Geological Storage at the GFZ.

What sounds as unspectacular routine work at a first glance, signalises the finalization of a more than ten years lasting scientific and engineering success story. „Together with its precursor projects CO2SINK and CO2MAN the ongoing project COMPLETE closes for the first time the complete life cycle of a CO2 storage site at pilot scale “, Axel Liebscher continues.

„Our research that already started in 2004 provided fundamental knowledge on construction, monitoring, operation and behaviour of a CO2 storage site from the exploration to the closure phase.“ Thereby, the pilot site Ketin comes up with the worldwide most comprehensive surface and subsurface monitoring network for surveillance of the CO2 storage operation.

Liebscher: „We were able to prove that this technology is generally feasible. With fit-to-purpose designed scientific and technical monitoring, CO2 can be safely stored in the subsurface if the geological conditions are suitable.“

After comprehensive pilot survey and the construction of the required infrastructure, a total of about 67,000 t CO2 have been injected at the Ketzin pilot site between June 2008 and August 2013 into porous sandstone at a depth of about 630 to 650 m. In autumn 2013 directly after termination of the injection the observation well Ktzi 202 was partly abandoned with CO2 resistant cement up to a depth of 521 m.

„Both, the scientific monitoring and survey of the recovered cement core showed, that the cementation performed in autumn 2013 has been successful. We therefore continued with the final abandonment of the well“, Axel Liebscher explains. The remaining four wells at the site will be abandoned and deconstructed in 2016, so that the initial conditions of site will be re-established in 2017.