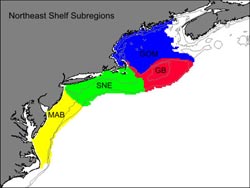 The four subregions of the Northeast Shelf Large Marine Ecosystem, which extends from Cape Hatteras, N.C. to the Gulf of Maine. MAB is the Mid-Atlantic Bight, SNE is Southern New England, GB is Georges Bank, and GOM is the Gulf of Maine. Credit: NOAA<br>

These high sea surface temperatures (SSTs) are the latest in a trend of above average temperature seen during the spring and summer seasons, and part of a pattern of elevated temperatures occurring in the Northwest Atlantic, but not seen elsewhere in the ocean basin over the past century. The advisory reports on conditions in the second half of 2012.

Sea surface temperature for the Northeast Shelf Ecosystem reached a record high of 14 degrees Celsius (57.2°F) in 2012, exceeding the previous record high in 1951. Average SST has typically been lower than 12.4 C (54.3 F) over the past three decades.

Temperature is also affecting distributions of fish and shellfish on the Northeast Shelf. The advisory provides data on changes in distribution, or shifts in the center of the population, of seven key fishery species over time. The four southern species – black sea bass, summer flounder, longfin squid and butterfish – all showed a northeastward or upshelf shift. American lobster has shifted upshelf over time but at a slower rate than the southern species. Atlantic cod and haddock have shifted downshelf.”

“Many factors are involved in these shifts, including temperature, population size, and the distributions of both prey and predators,” said Jon Hare, a scientist in the NEFSC’s Oceanography Branch. A number of recent studies have documented changing distributions of fish and shellfish, further supporting NEFSC work reported in 2009 that found about half of the 36 fish stocks studied in the Northwest Atlantic Ocean, many of them commercially valuable species, have been shifting northward over the past four decades.

The Northeast U.S. Continental Shelf Large Marine Ecosystem (LME) extends from the Gulf of Maine to Cape Hatteras, North Carolina. The NEFSC has monitored this ecosystem with comprehensive sampling programs since1977. Prior to 1977, this ecosystem was monitored by the NEFSC through a series of separate, coordinated programs dating back decades.

Warming conditions on the Northeast Shelf in the spring of 2012 continued into September, with the most consistent warming conditions seen in the Gulf of Maine and on Georges Bank. Temperatures cooled by October and were below average in the Middle Atlantic Bight in November, perhaps due to Superstorm Sandy, but had returned to above average conditions by December.

“Changes in ocean temperatures and the timing and strength of spring and fall plankton blooms could affect the biological clocks of many marine species, which spawn at specific times of the year based on environmental cues like water temperature,” Kevin Friedland, a scientist in the NEFSC Ecosystem Assessment Program, said. He noted that the contrast between years with, and without, a fall bloom is emerging as an important driver of the shelf’s ecology. “The size of the spring plankton bloom was so large that the annual chlorophyll concentration remained high in 2012 despite low fall activity. These changes will have a profound impact throughout the ecosystem.”

Michael Fogarty, who heads the Ecosystem Assessment Program, says the abundance of fish and shellfish is controlled by a complex set of factors, and that increasing temperatures in the ecosystem make it essential to monitor the distribution of many species, some of them migratory and others not.

“It isn’t always easy to understand the big picture when you are looking at one specific part of it at one specific point in time,“ Fogarty said, a comparison similar to not seeing the forest when looking at a single tree in it. “We now have information on the ecosystem from a variety of sources collected over a long period of time, and are adding more data to clarify specific details. The data clearly show a relationship between all of these factors.”

“What these latest findings mean for the Northeast Shelf ecosystem and its marine life is unknown,” Fogarty said. “What is known is that the ecosystem is changing, and we need to continue monitoring and adapting to these changes.”

Ecosystem advisories have been issued twice a year by the NEFSC’s Ecosystem Assessment Program since 2006 as a way to routinely summarize overall conditions in the region. The reports show the effects of changing coastal and ocean temperatures on fisheries from Cape Hatteras to the Canadian border. The advisories provide a snapshot of the ecosystem for the fishery management councils and also a broad range of stakeholders from fishermen to researchers.

The Spring 2013 Ecosystem Advisory, covering the fall of 2012 with supporting information, is available online at http://www.nefsc.noaa.gov/ecosys/advisory/current/advisory.html.

NOAA Fisheries Service is dedicated to protecting and preserving our nation’s living marine resources and their habitat through scientific research, management and enforcement. NOAA Fisheries Service provides effective stewardship of these resources for the benefit of the nation, supporting coastal communities that depend upon them, and helping to provide safe and healthy seafood to consumers and recreational opportunities for the American public.

NOAA’s mission is to understand and predict changes in the Earth's environment, from the depths of the ocean to the surface of the sun, and to conserve and manage our coastal and marine resources. Join us on Facebook, Twitter and our other social media channels.