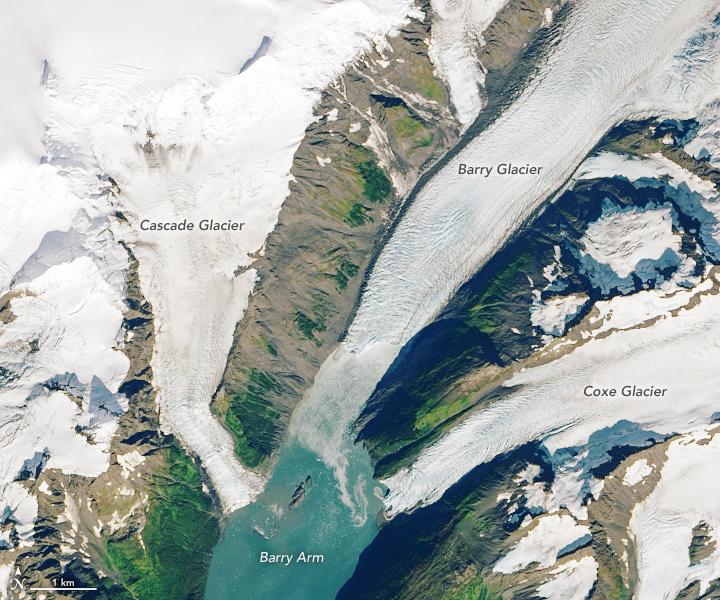 The unstable terrain that poses a landslide threat lies between the Cascade Glacier and Barry Arm Glacier, which has been steadily retreating over the last decade. This satellite image shows the glacier in 2013.
Credit: NASA Earth Observatory images by Lauren Dauphin, using Landsat data from the U.S. Geological Survey

Using NASA satellite imagery and software processing approaches, a group of geoscientists has discovered a landslide-generated tsunami threat in Barry Arm, Alaska, that will likely affect tourists and locals in the surrounding area in the next 20 years.

The Barry Arm Glacier has diminished rapidly in the last decade due to climate change, causing the surrounding terrain to become unstable. The researchers found that the mountainside near the Barry Arm Glacier has moved 394 feet (120 meters) over the seven-year period between 2010 to 2017. If that slow-moving landmass were to catastrophically fail – becoming what we typically think of as a landslide – it would fall 3,000 feet into the fjord below, sending tsunami waves toward nearby communities.

The researchers jumped into action after the discovery, writing an open letter to community stakeholders. The findings were published Oct. 29 in Geophysical Research Letters.

Chunli Dai, geophysics researcher at The Ohio State University in Columbus, worked with Bretwood Higman, geologist and co-founder of Ground Truth Alaska nonprofit, to analyze the slow-moving landslide near the Barry Arm Glacier. Their team tracked the landslide’s horizontal movement using satellite imagery and measurements from NASA-U.S. Geological Survey’s Landsat constellation, NASA’s Advanced Spaceborne Thermal Emission and Reflection Radiometer (ASTER), ESA’s (the European Space Agency) Sentinel-1, Planet Labs, and DigitalGlobe. As the longest-running Earth-observing satellite program, Landsat provided the researchers with an archive of satellite imagery that allowed the team to see how the Arctic surface in that area has changed over time. Data from the Polar Geospatial Center’s ArcticDEM project were also used to measure the elevation of the glacier to see how its height has changed over the years.

Dai and her team developed new and innovative tools that confirmed the threat from the landslide near the Barry Arm Glacier. The tools are sensitive enough to enable the team to detect signals associated with volcanic eruptions, changes in the surface due to permafrost melting, and landslides. These tools sort through massive topographic datasets to detect subtle changes in the land’s surface over time – acting as one step toward better preparation for hazards on the changing Arctic.

The new finding came out of a large project studying the topography of the Arctic surface and how that landscape is changing. The project uses ArcticDEM digital elevation models and is funded by the NASA Earth Surface and Interior (ESI) program. This project intends to use global, high-resolution topographic measurements so that NASA may better understand natural hazards and changing environments, said Benjamin Phillips, lead for NASA’s Earth Surface and Interior Focus Area. Partnering with the National Science Foundation, National Geospatial-Intelligence Agency, and others, NASA supports the development and distribution of new digital surface models of the globe, constructed from optical imagery acquired by the DigitalGlobe constellation.

As the Barry Arm Glacier retreats, 600 million cubic yards of rugged terrain that was once supported by the glacier is left unstable. During a landslide, rocks and debris act less like a collection of solids and more like a fluid. In the case of sudden landslide failure, this flow of rock and debris would likely fill the fjord, leaving several smaller lakes in place of the 450-foot deep body of water.

Barry Arm Fjord and the adjacent Harriman Fjord – 60 miles east of Anchorage on the southern coast of Alaska – are frequented by cruise ships, tour boats, fishing boats, kayakers, and hikers. Because of the immediate dangers posed by the potential the landslide and tsunami threat, Dai and the other scientists signed an open letter to local community stakeholders as soon as the hazard was identified so that they were aware of the implications that the landslide would likely generate a tsunami.

At the landslide’s current elevation, its mass would trigger a tsunami with waves hundreds of feet tall in Barry Arm. Broader impacts of the tsunami include 30-foot waves hitting Whittier, Alaska. Prince William Sound may experience wave and current changes, and rock and debris from the landslide would be scattered in this area.

If the landslide were to fail all at once, the potential energy stored within the event is equivalent to a magnitude seven earthquake, nearly ten times greater than any of Alaska’s largest tsunami-generating landslides in the last 70 years, said geoscientist Anna Liljedahl of Woods Hole Research Center in Homer, Alaska.

The resulting tsunami could travel up the opposite side of the fjord, harming wildlife, hikers and vegetation. Farther away from the source, bays throughout Prince William Sound act as amplifiers, meaning this tsunami would be less localized and more powerful even tens of miles from the source.

As a result of this discovery, the National Oceanic and Atmospheric Administration (NOAA), the agency responsible for tsunami alerts, is in the process of preliminary tsunami modeling. In early June, NOAA also assessed the fjord for wave height monitoring equipment, which could be installed and connected to their warning system network later this summer, said Liljedahl, who worked with Dai to assess the Barry Arm landslide threat.

Alaska’s Division of Geological and Geophysical Surveys (DGGS) is also monitoring the Barry Arm region following the scientists’ discovery. They completed an airborne lidar survey in mid-June to track the slide’s movement and are working with the Alaska Earthquake Center to install a seismic station near the fjord that will help detect sudden landslide movements. Without new monitoring equipment, Whittier would only have 20 minutes warning to evacuate if the Barry Arm landslide were to suddenly fail.

“There are a lot of natural hazards that people in Alaska are used to – earthquakes, volcanoes, and fire hazards. We need to take that mindset and apply that to landslide-generated tsunamis,” Liljedahl said.

In addition to current monitoring efforts, geoscientist Bretwood Higman said that having a GPS system on the landslide mass should be a high priority because it could give a better indication as to when the landslide will fail.

“Landslides sometimes accelerate just before they fail,” he said. “If you have some way of measuring deformation – if we see something like that – we can say risk is much higher right now, let’s get everyone out of the area.”

The landslide’s movement down the mountainside is strongly correlated to the nearby Barry Arm Glacier’s retreat, as surrounding area becomes destabilized as the glacier melts. While a landslide-generated tsunami is not a certainty, knowledge of the risk informs the need to monitor and prepare for the possibility. “This is such a huge area and rare event, but the risk of it happening is just going up because we have this warming climate,” Liljedahl said.