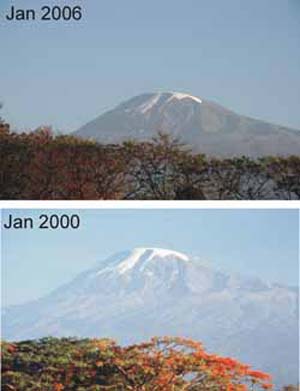 The five years of warming have taken a toll on the southern ice fields atop Kilimanjaro.

Five years after warning that the famed ice fields on Tanzania ’s Mount Kilimanjaro may melt, Ohio State University researchers have sadly found that their prediction is coming true.


And the impact of the loss of that ice atop Africa ’s highest peak – disregarding the loss of tourism that will follow the vanishing ice – could add to the heavy drought burden already facing those living near that mountain.

For Lonnie Thompson, professor of geological sciences, his third expedition to the summit of Kilimanjaro was all too much like visiting a sick friend in failing health.

In 2002, Thompson and his colleagues shocked the scientific community with their prediction that the ice fields capping the mountain would disappear between 2015 and 2020, the victims, at least in part, of global warming. Returning to his campus office last week, he admits that nothing has happened to alter that prediction.

In fact, the mountain’s ice fields may disappear sooner.

“The change there is so dramatic,” he said. “We can see it both in the field and from aerial photographs of the mountaintop. I would say it is on track to disappear, and the rate of ice loss may even be accelerating.

“But we need to look at the numbers to confirm that.”

The “numbers” he refers to are the combined data gathered from both the most recent and earlier expeditions, and from aerial surveys of the ice fields. By comparing these with past data, they can calculate just how much of Kilimanjaro’s ice has vanished. About 82 percent of the ice fields were lost between the time they were first mapped in 1912 and 2000.

In 2002, they assessed the changes in the mountain’s ice cover, comparing aerial photos from the year 2000 with those from 1962. That showed that the tops of the ice fields had lowered by at least 17 meters (nearly 56 feet) since 1962 — an average reduction of about a half-meter in height each year.

• A massive hole that reaches through the ice down to the bedrock has formed in the middle of the Furtwangler glacier, as well as in the northern ice field, two of the ice bodies on the mountain. Those holes should split the Furtwangler glacier in two within the next six months; and the northern ice field in the next two years.

• The thickness of the ice fields is waning rapidly. The northern ice field has lost 2 meters (6.5 feet) of ice from the surface, the Furtwangler has lost more than 3 meters (10 feet), and the southern ice fields have lost between 4 and 5 meters (13 and 16.5 feet).

Thompson said that the loss of more than 3 meters from the surface of the Furtwangler is serious since that entire glacier was only 9 meters thick in 2000 at their previous drill site. “There has been no accumulation of new ice forming on any of those ice fields since 2000,” he said.

The five years of warming have taken a toll on the southern ice fields atop Kilimanjaro.
“That’s an enormous amount of ice lost,” Thompson said.

“With the new aerial photographs, we will be able to calculate for the first time, not only the area of ice loss, but also the volume of water lost, since the last photos were taken in 2000.

Tanzania’s tourist trade depends in large part on international visitors. Showcased by Ernest Hemingway’s short story, The Snows of Kilimanjaro, ice fields so near the equator are a major attraction, and if they melt, so too, perhaps, will most of the tourism, Thompson said.

But the impact on local water supplies is likely to be even more serious. The population living around the base of the mountain depends on meltwater flowing from the glaciers, and precipitation in the rainforests that cover its flanks to supply the springs that provide water for both drinking and irrigation.

What isn’t clear, Thompson said, is the proportion of the water that comes from each source and the age of the spring and well water currently being consumed. If most comes from the rainforests, then the impact is lessened, but if glaciers provide the larger portion, the loss of the ice fields could be catastrophic.

The Ohio State team will look for answers from hundreds of water samples taken from springs and lakes in the area. Along with the same chemical tests they make on ice cores, they will also test the water for tritium, a radioactive isotope of hydrogen detectable in the water. Above-ground tests of nuclear weapons in the 1950s and 1960s dramatically increased the normal levels of tritium in water.

“If the water samples have high levels of tritium, it means that more of the spring water is younger and likely comes from the rain forest,” he said.

“But if the water is low in tritium, it means that the water is older, and that more of it originated from Kilimanjaro’s ice fields. And if the ice fields vanish, so might a large portion of the source of spring water.” Water samples were also collected for C-14 dating in case the tritium values prove so low that the age of the water cannot be determined.

“What will happen to the water supply for these people when the glaciers disappear?” he asked, “And disappear they surely will.”

Along with Thompson, other members of the field research team include Bryan Mark, assistant professor of geography; Jeffrey McKenzie, a postdoctoral fellow, and Sangsuk Lee, a Comer Fellow, both with OSU’s Byrd Polar Research Center. Byrd Center researcher Henry Brecher will be preparing the maps from this season’s aerial photos.

The project was supported by Ohio State University