Antarctic iced over when greenhouse gases – not ocean currents – shifted 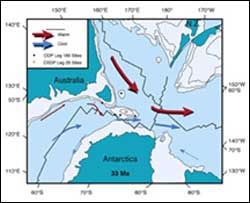 This image, based on newly obtained core samples from the ocean floor near Australia and Antarctica, shows a revised conception of current flow past those continents around 33 million years ago. At that time, the continents were just beginning to drift apart, and scientists have theorized that a warm-water current flowing southward along the Australian coast reached Antarctica, keeping that continent largely ice-free. But fossil plankton in the core samples indicate that a cold current flowed past Antarctica for about two million years before the continent developed its mile-thick ice cap, suggesting that the ice formed as a result of some other mechanism – possibly a variation in greenhouse gases in the ancient atmosphere. (Purdue University graphic/Huber laboratory)

A longstanding theory that provides much of the basis for our understanding of climate change – that the mile-thick ice sheet covering Antarctica developed because of a shift in ocean currents millions of years ago – has been challenged by Purdue University scientists.

Though climate scientists have theorized for decades that the circulation of warm ocean currents was responsible for keeping Antarctica largely ice-free during the Eocene epoch prior to 35 million years ago, a series of deep-sea core samples taken recently from the ocean floor south of Australia indicates that this theory needs reworking. The sampled sediments, which were deposited during the period when Australia and Antarctica were beginning to drift apart, show that cold-loving plankton, including diatoms and dinoflagellates, were common in the waters then located to the east of the two then-adjacent continents.

“These fossils indicate that a cold current, not the warm one that has been theorized, was flowing past the Antarctic coast for millions of years before the ice sheet developed,” said Matthew Huber, lead author and assistant professor in the earth and atmospheric sciences department in Purdue’s College of Science. “Because the ice sheet then appeared very rapidly, over a period of just a few thousand years, some other factor must have caused the rapid cooling that allowed it to form.”

As additional Eocene records show that substantial changes in the planetary carbon cycle were taking place at around the same time the ice sheet developed, Huber said that the most justifiable explanation for the change lays in atmospheric mechanisms.

“In light of all these data, a buildup of carbon dioxide in the atmosphere is a more reasonable explanation for the rapid icing of the Antarctic continent,” he said. “It should give us pause that just such a buildup is what humans are bringing to the atmosphere today.”

The research, which Huber performed with scientists from institutions in Sweden, Canada, the Netherlands, the United Kingdom and the United States, appears in the current (December 2004) issue of the scientific journal Paleoceanography. A companion paper, which offers a geological perspective on the separation of the two continents and on which Huber also participated, appears in the same issue.

For much of the past 150 million years, Antarctica has been largely ice-free, and climate scientists have theorized that a precursor to the East Australia Current – which today carries warm water southward along that continent’s coast – was responsible for keeping Antarctica warm. This longstanding theory suggests that as the two continents drifted apart, the widening gulf between them disrupted the warm current’s flow about 32 million years ago, preventing its heat from reaching Antarctica and plunging the continent into the deep freeze it still experiences today.

“Back when Australia and Antarctica were nearly touching, it was reasonable to imagine that such a current could keep the South Pole warm. After all, despite its high latitude, Europe is far warmer than Canada largely because the Gulf Stream warms it,” Huber said. “From that conjecture have sprung many other theories describing how ocean currents warm the planet. But it’s important to remember that it’s just a conjecture, and now we have fossil evidence that appears to refute it.”

In 2001 a survey vessel brought back core samples taken from waters on both sides of the island of Tasmania, which 35 million years ago was positioned rather like a stepping stone between the two continents. At that time, the three landmasses formed a shallow, warm-water bay to the west of the island, while to the east was open ocean.

“If the warm-water current theory were to hold true, the same kinds of warmth-loving microorganisms would have been found in Eocene sediments from both sides of the island,” Huber said. “We did find fossils of warmth-loving microorganisms west of Tasmania, where the bay was. But to the east, we found only fossils of cold-loving dinoflagellates. That indicated that there was no warm current flowing along that coast.”

Another piece of contrary evidence was the timing of the Antarctic ice cap’s formation. The continent did not begin to ice over until 2 million years after a deep-water channel opened between it and Australia, but when the ice cap did begin to form, it formed comparatively rapidly. “So you have separation between the continents for 2 million years, during which time the Antarctic climate remains largely the same. Then, suddenly, within a few tens of thousands of years, the continent is under a mile of ice,” Huber said. “Something other than a shift in ocean currents and continental position caused that change.”

Huber’s team looked at data taken from other studies of the end of Eocene period about 34 million years ago, a time when the planet experienced climate changes that are still enigmatic. The team found that fluctuations in the carbon cycle around that time released a substantial quantity of greenhouse gases into the atmosphere.

“This increased quantity of carbon dioxide and the atmospheric feedback mechanisms it triggered are the likeliest explanation for the sudden climate shift at the close of the Eocene,” Huber said. “Though we do not have definitive proof of this theory yet, it simply makes more sense in light of the core samples and timing of the ice cap’s formation.”

Huber acknowledges that his team’s work will provoke controversy but also cautions that the conclusions are suggestive, not definitive. “Obviously, if we can find more corroborating evidence that supports these conclusions, the theory will be easier to accept,” he said. “But we feel the data are even now strong enough to stand on their own, and we hope that they make it clear that changes in the atmosphere can have a dramatic effect on the climate in – geologically speaking, at least – a very brief period of time.”

Huber’s team is supported by a number of international funding sources. Huber acknowledges support from the Packard Foundation and from the National Science Foundation, which also supports the activities of the National Center for Atmospheric Research, where the study’s computer modeling was performed.

Huber is affiliated with the Purdue Climate Change Research Center, which promotes and organizes research and education on global climate change and studies its impact on agriculture, natural ecosystems and society.