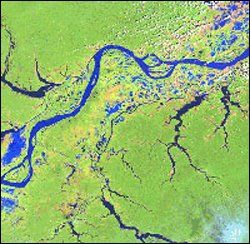 Researchers from around the globe participating in the world’s largest environmental science experiment, the Large-Scale Biosphere Atmosphere Experiment in Amazonia (LBA), will, fittingly, convene in Brazil this week.

From July 27-29, some 800 researchers will attend the Third International Scientific Conference of the LBA in Brasilia, Brazil, to discuss key findings on how the world’s largest rainforest impacts the ecological health of Amazonia and the world. Never before has so much information about the Amazon been assembled for presentation at once.

LBA is partly funded by NASA. Also, scores of projects that feed the Amazon experiment depend heavily on NASA’s vast expertise in satellite information, computer modeling, and providing infrastructure for large-scale field campaigns.

The overall experiment concentrates on how the Amazon forest and land use changes within the region affect the atmosphere, and regional and global climate. In turn, LBA also studies how climate changes influence the biological, chemical and physical functioning of the forest itself.

Topics discussed at the conference will include: the carbon cycle, the water cycle, human land use, ecosystem processes and human health, agricultural applications, and other topics relating to the Amazon. The conference will also allow researchers and Brazilian policy makers to discuss ways to use LBA results to create public policies for the Amazon region that foster a healthy environment and provide for sustainable development.

NASA plays a key role in LBA research. Satellites provide data for studying land use changes and their impacts on climate. Scientists hope to learn more about the Amazon forest’s role in sequestering carbon from the atmosphere. Atmospheric carbon dioxide (CO2) traps heat and adds to global warming. Plant life absorbs CO2 from the air during photosynthesis and stores it in stems, leaves and roots. In order to understand regional and global carbon balances, researchers must quantify how much carbon is taken up by the rainforest as well as how much is released back to the atmosphere when forests are cleared or burned.

In the Amazon, deforestation, selective logging, fires and forest re-growth all play major roles in the carbon balance. In the Brazilian Amazon region alone, annual clear-cutting and burning of forests cover about 20,000 square kilometers (7,700 square miles or about the area of New Jersey). NASA data products from various instruments on the Landsat series of satellites have documented the history of deforestation in the Amazon since the 1970s. LBA researchers have found ways to measure both logging area and logging damage using Landsat and experimental new sensors on NASA’s EO-1 satellite.

Ecosystem models and NASA’s Moderate Resolution Imaging Spectroradiometer (MODIS) instrument aboard the Terra and Aqua satellites have helped scientists understand how the exchange of carbon between the forest and atmosphere differs over the course of the year. Also, LBA studies have found forest uptake of CO2 is not enough to keep pace with carbon that is returned to the atmosphere when forests are cut.Burning practices to clear fields for farming often result in fires spreading to adjacent forests. These large fires create air pollution and can contribute to respiratory problems in people. Thick smoke has forced airports to close, and has caused highway accidents. Satellite retrievals of concentrations of airborne particles from NASA’s MODIS instrument have been used by Brazil’s Center for Weather Prediction and Climate Studies to create models that can predict fire risk and smoke transport in near-real time.

Satellite data also help scientists study how particles from fires impact climate and weather. These particles, known as aerosols, can both heat and cool the air, depending on size, shape and color.

Scheduled to end in 2006, LBA is considered an international scientific success, with 61 projects completed and 59 in progress. The efforts include more than 1,000 researchers from institutions in Brazil, the United States, eight European countries and several other countries of the Amazon Basin (Venezuela, Peru, Bolivia, Colombia and Ecuador). LBA is financed by Brazilian funding agencies, NASA and the European Union.