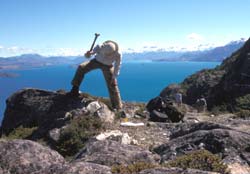 An answer to the long-standing riddle of whether the Earth’s ice ages occurred simultaneously in both the Southern and Northern hemispheres is emerging from the glacial deposits found in the high desert east of the Andes.

Using a new technique to gauge the effects of cosmic rays on minerals found in boulders carried by South American glaciers thousands of years ago, a group of scientists from the University of Wisconsin-Madison has demonstrated that the Earth’s most recent ice ages were global events, likely driven by change in the atmosphere.

The work, reported in the current (March/April) issue of the Geological Society of America Bulletin, a leading earth science journal, is important because it reveals that ice ages were global in nature, a fact scientists had trouble determining due to the difficulty of precisely dating the jumble of debris – sand, gravel, clay, boulders – that ice age glaciers leave in their wakes. The new work suggests that ice ages were worldwide phenomena due, in part, to the sluggish redistribution of solar energy through the world’s oceans punctuated by repeated, rapid cooling of the Earth’s atmosphere.

The work is certain to help researchers of past climates unravel the mysteries of the ice ages that periodically grip the planet, but it also will help those trying to understand current and future climate change by helping to determine the natural causes of changes in the Earth’s climate system at a global scale.

“The results are significant because they indicate that the whole Earth experiences major ice age cold periods at the same time, and thus, some climate forcing mechanism must homogenize the Earth’s climate system during ice ages and, by inference, other periods,” says Michael R. Kaplan, a postdoctoral fellow at the University of Edinburgh who conducted the work in a postdoctoral position at UW-Madison.

The Wisconsin team, which was supported by the National Science Foundation and worked under the direction of UW-Madison geology professor Brad Singer, collected samples of quartz and other minerals from boulders found on the crests of the moraines that mark the waxing and waning of mountain glaciers in the Andes Mountains of Argentina.

Using a technique to read the changes imposed by cosmic rays – charged, high-energy particles that bombard the Earth from outer space – on atoms found in the mineral quartz, the UW-Madison researchers were able to precisely date a sequence of moraines, ridge-like glacial features composed of an amalgam of rocks, clay, sand and gravel. Their results show that glacial ice in South America reached its apex 22,000 years ago and had begun to disappear by 16,000 years ago.

“We’ve been able to get quite precise ages directly on these glacial deposits,” says Singer, whose specialty is geochronology. “What we found was that the structure of the last South American ice age is indistinguishable from the last major glaciation in the Northern Hemisphere.”

What’s more, the group found evidence that the last major glacial period prior to the last ice age, from a time dating to 150,000 years ago, mirrored North American climate for the same period.

“During the last two times in Earth’s history when glaciation occurred in North America, the Andes also had major glacial periods,” says Kaplan.

The results address a major debate in the scientific community, according to Singer and Kaplan, because they seem to undermine a widely held idea that global redistribution of heat through the oceans is the primary mechanism that drove major climate shifts of the past.

The implications of the new work, say the authors of the study, support a different hypothesis: that rapid cooling of the Earth’s atmosphere synchronized climate change around the globe during each of the last two glacial epochs.

“Because the Earth is oriented in space in such a way that the hemispheres are out of phase in terms of the amount of solar radiation they receive, it is surprising to find that the climate in the Southern Hemisphere cooled off repeatedly during a period when it received its largest dose of solar radiation,” says Singer. “Moreover, this rapid synchronization of atmospheric temperature between the polar hemispheres appears to have occurred during both of the last major ice ages that gripped the Earth.”

According to Singer and Douglass, the dating method is relatively new, and requires reducing kilograms of quartz-bearing rock to about a million atoms of 10-beryllium in the laboratory. Those atoms are then analyzed using an accelerator mass spectrometer to determine how long ago the quartz was exposed to cosmic rays, which can only penetrate the top meter or so of the Earth.

In addition to Kaplan, Singer and Douglass, co-authors of the GSA Bulletin article include Robert P. Ackert, Jr., and Mark D. Kurz, both of the department of marine chemistry and geochemistry at the Woods Hole Oceanographic Institution, Woods Hole, Mass.