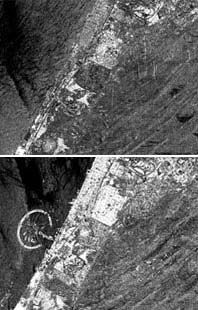 These two SAR images of the coastline of Dubai in the United Arab Emirates were acquired by ERS-2 on 20 May 1999 and Envisat on 21 April 2003. The latter image shows the Palm Jumeirah development under construction. <br> <br>Credits: ESA

The rapidly changing face of Dubai in the United Arab Emirates is portrayed by contrasting Synthetic Aperture Radar (SAR) images taken less than four years apart, most notably as a whole new artificial island is seen to rise from the seabed.

An initial radar image of Dubai was taken by ERS-2’s SAR instrument in May 1999. The coastal city has since been re-imaged by the Advanced Synthetic Aperture Radar (ASAR) instrument aboard Envisat, ESA’s latest Earth Observation satellite. Unlike optical imagery, SAR images work by mapping surface roughness, based on the strength of radar backscatter reflected back up to space.

The increased white areas in the Envisat ASAR image compared to the ERS-2 image from 1999 – caused by radar reflecting strongly off building surfaces – are evidence of changes as mass construction programmes continue to develop the city.
Nowhere is this more apparent than the ambitious Palm project set offshore. After several years of planning, construction was started on twin €1.2 billion islands – The Palm, Jumeirah (seen here) and The Palm, Jebal Ali – in 2001. Work began after the ERS-2 image acquisition while the Envisat image shows significant progress being made.

The creation of the two palm-shaped artificial islands will increase Dubai’s shoreline by 120 km. They are comprised of approximately 100 million cubic metres of rock and sand. Situated on the Palms will be over 60 luxury hotels, 5000 residential villas, 5000 apartments, marinas, water theme parks, restaurants, shopping malls, sports facilities, health spas, cinemas and numerous dive sites. The intention is to cap the city’s growing reputation as a tourist location.

A number of people have already taken the opportunity to purchase property on the Palm including footballer David Beckham. And he won’t be lonely: he’ll have England teammate Michael Owen as a neighbour as well as four ex-teammates from Manchester United.

The Palm is the latest in a number of innovative projects in the Jumeirah Beach, Jebal Ali area of the city including the six-star Burj al Arab hotel, seen on the image just north of the base of the Palm Jumeirah.

The most ambitious project however begins this year as land reclamation starts on “The World” – a series of 200 islands situated off the Dubai coast built in the shape of the world. The project is due to finish in 2008, and promises a view well suited for satellite imagery.