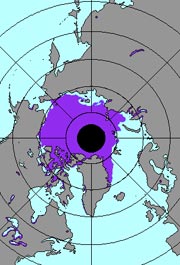 A 30-year satellite record of sea ice in the two polar regions reveals that while the Northern Hemisphere Arctic ice has melted, Southern Hemisphere Antarctic ice has actually increased in more recent years. However, due to dramatic losses of Antarctic sea ice between 1973 and 1977, sea ice in both hemispheres has shrunk on average when examined over the 30-year time frame.

This study presents the longest continuous record of sea ice for both hemispheres based primarily on satellites, and the longer reading already begins to highlight some new information about sea ice trends over time, like the fact that more recently the Arctic has been losing ice at a faster rate.

“If you compare the rate of loss in the Arctic for the last two decades, it is 20 percent greater than the rate of loss over the last three decades,” said Don Cavalieri, lead author of the study, and a senior researcher at NASA’s Goddard Space Flight Center. The study appeared in a recent issue of Geophysical Research Letters.

The greater rate of sea ice loss in the Arctic may be due to a general warming trend in the Arctic as well as the influence of long-term oscillations or other changes in atmospheric pressure systems, which could pull in more warm air from the south.

In contrast, there was a dramatic loss of Antarctic sea ice cover from 1973 to 1977, and since then the ice has gradually spread in area.

“The increase has been slow enough that it does not totally wipe out the earlier decreases,” said Claire Parkinson, senior researcher at NASA’s Goddard Space Flight Center, and a co-author of the paper. Another co-author is Konstantin Y. Vinnikov, of the department of meteorology at the University of Maryland, College Park.

In the Antarctic, the gradual advance of ice from the late 1970s may be related to long-term atmospheric oscillations in the Southern Hemisphere resulting in stronger westerly winds and cooler temperatures.

“Trying to explain why these things happen becomes tricky,” said Parkinson. “The temperature connection where warmer temperatures lead to greater melt is reasonably direct, but far from the complete story. Winds and waves move ice around, and consequently the ice can move to places where it is warm enough that it wouldn’t have formed.”

While the study represents the longest continuous record comparing the two polar regions, there was a major gap in the satellite sea ice data between early 1977 and late 1978. This gap was filled by maps of sea ice created from ship and other reports in polar areas and conveyed to the National Ice Center.

The study uses satellite data from NASA’s Nimbus 5 Electrically Scanning Microwave Radiometer (ESMR), NASA’s Nimbus 7 Scanning Multichannel Microwave Radiometer (SMMR), and the Defense Meteorological Satellite Program Special Sensor Microwave Imagers (SSMIs). The Nimbus 5 ESMR data covered from December 1972 to March 1977, with the Nimbus 7 SMMR combined with the Defense Program’s SSMIs picking up data from October 1978 to December 2002. For the year and a half in between 1977 and 1978, the researchers used data and maps from the National Ice Center.

“The National Ice Center all along created operational maps of sea ice cover to help ships in the region trying to navigate around or through the ice,” Parkinson said. These maps, while not as comprehensive as satellite data, had to be created every week, using the best data available at the time. The researchers figured it was the most accurate data to bridge the gap between the satellite records.

Previously, NASA scientists had blended the SMMR and SSMI data sets together to generate a 20-year time series of sea ice extents from 1979 to 1998.

By having a 30 year record, the researchers have a much longer baseline to see the trends in both the Arctic and the Antarctic, and they can see seemingly unusual events like the rapid loss of ice in Antarctica in the mid-70s.

“It seems the two regions are responding to different hemispheric variations,” said Cavalieri. “What remains is to sift out and understand how these variations are driving the sea ice in each hemisphere.”