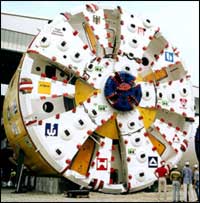 Expertise derived from working on the joint NASA-ESA Cassini-Huygens mission to Saturn and its moon Titan is now being applied to underground drilling machines. This is providing tunnelling engineers with an improved ability to virtually “see” some 40 metres into solid rock and pinpoint obstacles ahead.

It´s an old miners´ expression: “There is darkness in front of the pick”. Billions of years of geological history has laid down complex folds of strata, patterns of faulting and embedded irregular objects in the ground beneath our feet. The character of the earth can and often does change unexpectedly with every metre excavated.
But with modern high-speed tunnelling, sudden geological shifts may damage the cutting head of drilling machines and lead to expensive delays in multi-million Euro excavation projects.

German tunnelling company Herrenknecht AG – famous for drilling the Elbe tunnel in Hamburg using the world´s single largest tunnelling machine – has developed a new method of charting what lies ahead beyond the tunnel face.

Geologists have mapped the deep structure of the Earth by monitoring how seismic waves from earthquakes echo through our planet. On the same principle but a smaller scale, seismic waves can be sent through a tunnel face, and significant discontinuities in the rock mass will reflect waves again back. If necessary serious obstacles can then be removed, preventing damage to the drilling machine and reducing overall downtime.

Herrenkneckt AG has originated a way to do this even as drilling carries on. Their idea is to fit specially adapted transmitters and microphones onto a drilling machine´s rotary shear blades. The transmitters project sound into the ground every second, while the microphones record seismic reflections. A computer behind the tunnelling machine evaluates measured and statistical seismic data to visualise significant geological shifts in the earth ahead.

However the initial transmitter used was a commercial shaker designed for industrial vibration tests, whose function was not fully satisfactory. Herrenknecht AG knew all components of a more efficient seismic probing system would have to be precisely designed to work reliably under the extreme stresses of the rock face. With on-the-job repair almost impossible, extensive pre-operational testing was required.

It was this requirement that led Herrenknecht AG engineers to approach MST Aerospace – ESA´s Technology Transfer broker in Germany – back in September 1998 to put them in touch with a partner with experience in space-related mechanical engineering.

“We were looking for a competent partner in acoustic design and vibration analyses,” says Andreas Kassel, a geophysicist with Herrenknecht AG, responsible for the development of prediction methods for tunnel boring machines (TBMs). “We contacted MST as we hoped they had already tackled similar vibration problems for launcher and space missions. We know that for space extreme reliable technical solutions are needed and that was what we were looking for.”

In March 1999 their first meeting took place with Astro- und Feinwerktechnik Adlershof GmbH, a start-up of Forschungszentrum Berlin-Adlershof of the German Aerospace Centre DLR. This firm has developed specialist electro-mechanical hardware for several space mission payloads, most notably ESA´s Cosmic Dust Analyser for the Cassini spacecraft currently on its way to Saturn along with Huygens, ESA´s Titan lander.

It was delivered the following year and swiftly judged a success: “We found it achieved improvements in pulse compression and thus in spatial resolution of our seismic reflection method by an order of magnitude,” Kassel explains.

These new seismic probing transmitters have been successfully tested on a 9.8m-diameter TBM shield excavating the 1,600m-long Pannerdensch Kanaal twin tunnel near Arnhem, part of the Netherlands new 160km Betuweroute freight railway line. The transmitters are also due to be installed on two further TBMs for an excavation in Kuala Lumpur, Malaysia.

MST Aerospace in Germany is part of ESA´s Technology Transfer Programmes network of technology brokers. The objective is to stimulate the spin-off of space technologies in the non-space sector.

“Our experience shows that the use of innovative technologies produced for European space programmes can improve our day-to-day life on Earth,” says Pierre Brisson, head of ESA´s Technology Transfer Programme. “Since 1991 when we started our programme, more than 160 transfers have generated EUR 25 million in turnover for European space companies and EUR 270 million for the non-space industries involved.”

The virtual market place “www.technology-forum.com”, run by MST Aerospace on behalf of ESA, is available to European industry to facilitate the process of technology exchange. Advanced technologies ready and available are presented, requests for specific technological solutions can be posted, and solutions offered.