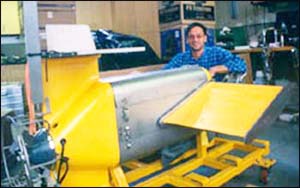 Scientists from six institutions, including Scripps Institution of Oceanography at the University of California, San Diego, are closing the gap in deciphering one of the most puzzling aspects of the world’s oceans. “Ocean mixing,” the complex motions of seawater that span large-scale phenomena down to tiny, centimeter-sized turbulent motion, serves a key role in redistributing heat throughout the oceans. Although ocean mixing is a key element in the climate system and important for sea life for dispersing nutrients, a mystery remains in accounting for how its processes unfold.

A new research paper in the journal Science describes ocean mixing in unprecedented detail. Using an array of technologies and instruments, scientists in the Hawaii Ocean-Mixing Experiment (HOME), a nearly $18 million National Science Foundation-sponsored project focused on pinpointing, dissecting, and analyzing ocean mixing, captured intriguing phenomena including undersea waves that spanned nearly 1,000 feet. The paper in the July 18 issue of Science is the first effort by HOME investigators to collectively document their findings.

The HOME scientists chose the Hawaiian Ridge, a 1,600-mile largely submerged volcanic mountain chain that stretches from the Big Island of Hawaii to Midway Island, due to its rough topography, including large underwater mountains and valleys. Such areas are sometimes referred to as the “stirring rods” of the oceans.

Prior to the HOME project, areas such as the Hawaiian Ridge were hypothesized to be a major energy pathway for ocean mixing turbulence. Traveling across the Pacific, oceanic tides crash upon the Hawaiian Ridge and dissipate. To help explain how such areas help mix warm low latitude waters and cool polar waters, HOME investigators undertook a comprehensive survey to track the cascade of ocean energy and turbulence.

“One of the triumphs of the HOME experiment was being able to measure the cascade from thousands of meters down to centimeter scales,” said Dan Rudnick, a professor of oceanography at Scripps and lead author of the Science paper. “I don’t think this effort is rivaled in terms of measuring detailed dissipation over a topographic feature.”

HOME scientists, using the Scripps research vessel Roger Revelle, the flagship of the Scripps fleet; the towed instrument SeaSoar, which took a variety of measurements of upper ocean properties; a new Doppler sonar developed by Scripps Professor Robert Pinkel; and a variety of other instruments and equipment, found that the Hawaiian Ridge is indeed a site with vastly increased ocean mixing. They documented undersea internal wave energy that was enhanced 10 times at the Hawaiian Ridge as compared with normal open ocean areas.

With the details of the cascading processes described in the Science paper, the coauthors helped further close the gap of how energy is dissipated in ocean mixing. But the paper notes that the energy puzzle is not completely solved with these results. Even more energy for ocean mixing must be found elsewhere.

“Our conclusion is interesting because we found that there was certainly a lot of energy loss occurring at the Hawaiian Ridge, but much of it propagates away and doesn’t get dissipated at the ridge. So we’re approaching closure of this phenomenon,” said Rudnick. “But until we have a firmer understanding of this process-until we get a better handle on mixing-climate models will be of limited use.”

Planning for the HOME project began in 1996 and the final field phases of the project were concluded last month. Scientific analysis of the data set is planned through 2005.

Scripps Institution of Oceanography at the University of California, San Diego, is one of the oldest, largest, and most important centers for global science research and graduate training in the world. The scientific scope of the institution has grown since its founding in 1903. A century of Scripps science has had an invaluable impact on oceanography, on understanding of the earth, and on society. More than 300 research programs are under way today in a wide range of scientific areas. Scripps operates one of the largest U.S. academic fleets with four oceanographic research ships and one research platform for worldwide exploration. Now plunging boldly into the 21st century, Scripps is celebrating its centennial in 2003.