Home / Earth Sciences / ’Getting the dirt’: from space, sky and ground, scientists and students dig high and low for soil moisture data
10.07.2003

’Getting the dirt’: from space, sky and ground, scientists and students dig high and low for soil moisture data 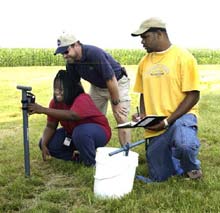 A water-sensing satellite orbits more than 400 miles above Earth. An instrument-packed airplane circles 25,000 feet above three U.S. states and Brazil. Scientists, college students and other volunteers troop into the countryside, armed with sensors and notepads. It’s all about “getting the dirt.” In this case, collecting detailed information about the soil.

The objectives are two-fold — validating soil moisture data gleaned from satellites and working to find the optimum instrument for conducting soil moisture remote sensing. By learning how to better gauge the amount of moisture in the soil, scientists are pursuing the long-range goal of eventually helping to improve the accuracy of weather forecasts and better estimate crop yields through remote-sensing methods.

Led by Dr. Thomas Jackson of the U.S. Department of Agriculture (USDA), Soil Moisture Experiments in 2003, or SMEX03, is a collaboration between NASA, the USDA’s Agricultural Research Service, the Brazilian Agricultural Research Corporation, several academic institutions across the United States, and the Center for Hydrology, Soil Climatology, and Remote Sensing (HSCaRS) of Alabama A&M University in Huntsville — a NASA-sponsored Minority University Research Center that promotes minority and women student involvement in Earth science research.

There are three phases to the project’s field operations, which began June 22 in Huntsville. The project gathered data from Alabama and Georgia through July 2, moved to Oklahoma to collect data until July 19, and will finish in Brazil Sept. 16-26.

“By gathering comprehensive soil moisture data from space, air and land, we hope to better understand how these measurements correlate and how this information can help farmers, weather forecasters and others who depend on Mother Nature for their livelihood, said Dr. Charles Laymon, a hydrologist and remote sensing scientist with Universities Space Research Association at the Global Hydrology and Climate Center (GHCC) in Huntsville.

An improved understanding of moisture in the soil, for example, could ultimately aid irrigation efforts — a costly proposition for most farmers. Armed with better soil moisture information, farmers could save crops by irrigating when and precisely where necessary, or save money by refraining from irrigation when it’s not needed. This is important, Laymon said, because simple ground-based observations don’t always tell the whole story. That’s why scientists leading the Soil Moisture Experiments in 2003 will look skyward for much of their data.

Aqua, a NASA satellite launched in May 2002, will fill in part of the puzzle. Orbiting about 430 miles above Earth, its sensors collect information about Earth’s water cycle — including water vapor in the atmosphere, clouds, precipitation, and snow and ice cover. The Advanced Microwave Scanning Radiometer for Earth Observing Systems, or AMSR-E — along with AMSR, a Japanese National Space Development Agency instrument, are the Aqua instruments scientists hope can provide information about soil moisture.

A challenge, Laymon said, will be taking the “big picture” offered by AMSR-E and filling in the gaps. “AMSR-E was designed primarily to monitor oceans and polar ice,” he said. “So the sensor provides a very broad view of terrestrial soil moisture. To get a more detailed look at soil moisture, GHCC scientists will use mathematical algorithms to fine-tune AMSR-E’s results, and more importantly, correlate the satellite data to measurements gleaned by airborne instruments in the sky and by people on the ground.”

The research aircraft are NASA’s P-3B, a four-engine turboprop, and DC-8, a four-engine jet. Equipped with a suite of remote sensing instruments developed for airborne observations in support of satellite validation, they will document patterns of surface moisture by measuring microwave energy in units of brightness temperature and power reflected off the surface.

On the ground, teams of scientists, college students and volunteers — rain or shine — will disperse into the countryside daily, taking measurements that include soil moisture and temperature, ground cover type and plant height.

“The students have an opportunity to get hands-on experience in field research as well as laboratory analysis of soil samples, said Dr. Tommy Coleman, director of HSCaRS at Alabama A&M. “It also gives them perspective on how to approach research tasks in an orderly fashion.”

One student volunteer is Lakesha Fowler, a junior from Alabama A&M University. A civil engineering major who eventually wants to plan cities and communities, Fowler will spend two weeks sampling soil at several rural sites near the Alabama-Tennessee state line. “I hope to gain more knowledge about soil and its water content,” she said. “This project will give me insight that’s difficult to gain in a classroom.”

Participating NASA centers include NASA’s Marshall Space Flight Center in Huntsville, NASA’s Goddard Space Flight Center in Greenbelt, Md., and NASA’s Jet Propulsion Laboratory in Pasadena, Calif. The GHCC is one of seven research centers at the National Space Science and Technology Center in Huntsville, a partnership among the Marshall Center, Alabama research universities, industry and other federal agencies. Aircraft used for SMEX03 are based at NASA’s Wallops Flight Facility in Wallops Island, Va., and Dryden Flight Research Center in Edwards, Calif.