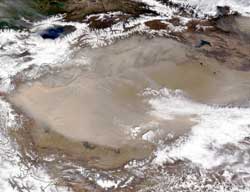 Dust from China’s Takla-Makan desert traveled more than 20,000 kilometers [12,000 miles] in about two weeks, crossing the Pacific Ocean, North America, and the Atlantic Ocean, before settling atop the French Alps. Chinese dust plumes had been known to reach North America and even Greenland, but had never before been reported in Europe.

An international team of scientists, using atmospheric computer models, studied dust that traveled the globe from February 25 to March 7, 1990. Their findings are published in a paper authored by Francis E. Grousset of Columbia University’s Lamont-Doherty Earth Observatory in Palisades, New York, and the University of Bordeaux I in France, and colleagues. It appears in Geophysical Research Letters, published by the American Geophysical Union.

Research conducted in 1994 showed that over the 20 preceding years, a score of red dust events coated the snow cover in the Alps and Pyrenees mountains. The dust that topped these European mountain ranges was sampled and stored for comparison with dust from various parts of the world. Scientists analyze the minerals and composition of certain distinctive elements of the dust, especially neodymium, to determine its origin.

The researchers used the Global Ozone Chemistry Aerosol Radiation Transport (GOCART) model, which analyzes wind, soil moisture, and surface characteristics to simulate the generation and transport of dust. Meteorological information was taken from the NASA Goddard Earth Observing System Data Assimilation System (GEOS DAS). The National Oceanic and Atmospheric Administration’s (NOAA) Air Resources Laboratory (ARL) showed the paths of air masses as they moved around the world from the time the dust was swept into the atmosphere to the time it settled on the mountaintops.

Grousset and his colleagues found several examples of dust collected in southern France that clearly originated from North African sources. The North Africa-to-Europe dust path was already well known. But data analyzed by the NASA and NOAA instruments independently of each other strongly suggested that some of the Alpine dust originated in a huge dust storm in western China, whose transport across two oceans and the North American continent to Europe had not previously been documented.

The origin and final location of dust are important to help determine any effects from heavy metal or fungal, bacterial, or viral pollution that may be associated with it. Previous studies have indicated, for example, that fungi found in African dust causes Sea Fan disease in Mediterranean coral reefs. The National Institute of Health’s National Institute of Allergy and Infectious Diseases has identified airborne dust as the primary source of allergic stress worldwide.

The research was funded mainly by France’s National Center for Scientific Research (CNRS). Additional support was provided by NASA and the National Science Foundation (NSF).