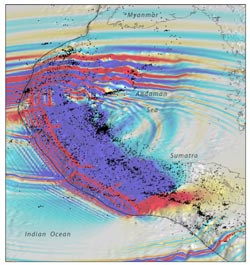 Some 380 seconds into the greatest earthquake to rupture since 1960, the simulated dynamic Coulomb stress waves (red-blue) shed continuously off the 2004 M=9.2 Sumatra rupture front can be seen sweeping through the Andaman Sea, where faults remarkably shut down for the next five years. Earthquakes since 1964 are shown as black dots, and the Sunda trench along which the 1400-km-long earthquake occurred is the arcuate black line on the left (west). Sumatra is on the right, and Myanmar/Burma is at top. Sevilgen et al (Proc. Nat. Acad. Sci, 2012) find that despite the magnitude of thesedynamic stress waves, the much smaller permanent stresses account for the change in seismicity after the main shock. <br> <br>This graphic accompanies the Sept. 3, 2012 article in Proceedings of the National Academy of Sciences by Volkan Sevilgen, Ross Stein and Fred Pollitz.<br> <br>Seismicity.net<br>

Both studies shed light on more than a decade of debate on the origin and prevalence of remotely triggered earthquakes. Until now, distant but damaging “aftershocks” have not been included in hazard assessments, yet in each study, changes in seismicity were predictable enough to be included in future evaluations of earthquake hazards.

In a study published in this week’s issue of “Nature,” USGS seismologist Fred Pollitz and colleagues analyzed the unprecedented increase in global seismic activity triggered by the Magnitude-8.6 East Indian Ocean quake of April 11, 2012, and in a recently published study in the “Proceedings of the National Academy of Sciences,” seismologist Volkan Sevilgen and his USGS colleagues investigated the near-cessation of seismic activity up to 250 miles away caused by the 2004 M9.2 Sumatra earthquake.

While aftershocks have traditionally been defined as those smaller earthquakes that happen after and nearby the main fault rupture, scientists now recognize that this definition is wrong. Instead, aftershocks are simply earthquakes of any size and location that would not have taken place had the main shock not struck.

“Earthquakes are immense forces of nature, involving complex rock physics and failure mechanisms occurring over time and space scales that cannot be recreated in a laboratory environment,” said USGS Director Marcia McNutt. “A large, unusual event such as the East Indian earthquake last April is a once-in-a-century opportunity to uncover first order responses of the planet to sudden changes in state of stress that bring us a little closer to understanding the mystery of earthquake generation.”

An extraordinary number of earthquakes of M4.5 and greater were triggered worldwide in the six days after the M8.6 East Indian Ocean earthquake in April 2012. These large and potentially damaging quakes, occurring as far away as Mexico and Japan, were triggered within days of the passage of seismic waves from the main shock that generated stresses in Earth’s crust.

Another clue in the six days of global aftershocks following the M8.6 quake is that the rate of global quakes during the preceding 6-12 days was extremely low. “Imagine an apple tree, with apples typically ripening and then falling at some steady rate,” Stein said. “If a week goes by without any falling, there will be more very ripe apples on the tree. Now shake the trunk, and many more than normal might drop.”

The authors emphasize that the week of global triggering seen after the East Indian Ocean quake has no bearing on the hypothesis advanced by others that the 2004 M9.2 Sumatra, 2010 M8.8 Maule, Chile, and 2011 M9.0 Tohoku, Japan, are related to each other. Instead, the effect of increased earthquakes lasted a week—not a decade.

Sumatra quake affects faults up to 250 miles away

While global triggering of large aftershocks appears very rare, regional triggering is common and important to understand for post-main shock emergency response and recovery. Sevilgen and his USGS colleagues studied the largest quake to strike in 40 years to understand just how great the reach is on aftershock occurrence. After the M9.2 earthquake in Sumatra in 2004, aftershocks larger than M4.5 ceased for five years along part of a distant series of linked faults known as the Andaman back arc fault system. Along a larger segment of the same system, the sideways-slipping transform earthquakes decreased by two-thirds, while the rate of rift events – earthquakes that happen on a spreading center – increased by 800 percent, according to Sevilgen and his colleagues at the USGS. These very large, but distant seismicity rate changes are unprecedented.

The authors investigated two possible causes for the changes in remote seismicity rates: the dynamic stresses imparted by the main shock rupture, which best explain the global triggering in the April 2012 quake case; and the small but permanent stress changes, which best explain this one. The authors found that the main shock brought the transform fault segments about ¼ bar of pressure farther from static failure, and the rift segments about ¼ bar closer to static failure (for comparison, car tires are inflated with about 3 bars of pressure), which matches the seismic observations.

Incorporating the probability of aftershocks into the hazard assessment of an area is important because the damage of even a moderate aftershock sometimes exceeds that wrought by the main event. For example, a M6.3 aftershock five months after the M7.1 New Zealand earthquake in 2010 hit a more populated area, causing 181 deaths and tripling the insured property damage of the main event.

Links and contacts within this release are valid at the time of publication.
Contact Information:
U.S. Department of the Interior, U.S. Geological Survey
Office of Communications and Publishing
12201 Sunrise Valley Dr, MS 119
Reston, VA 20192