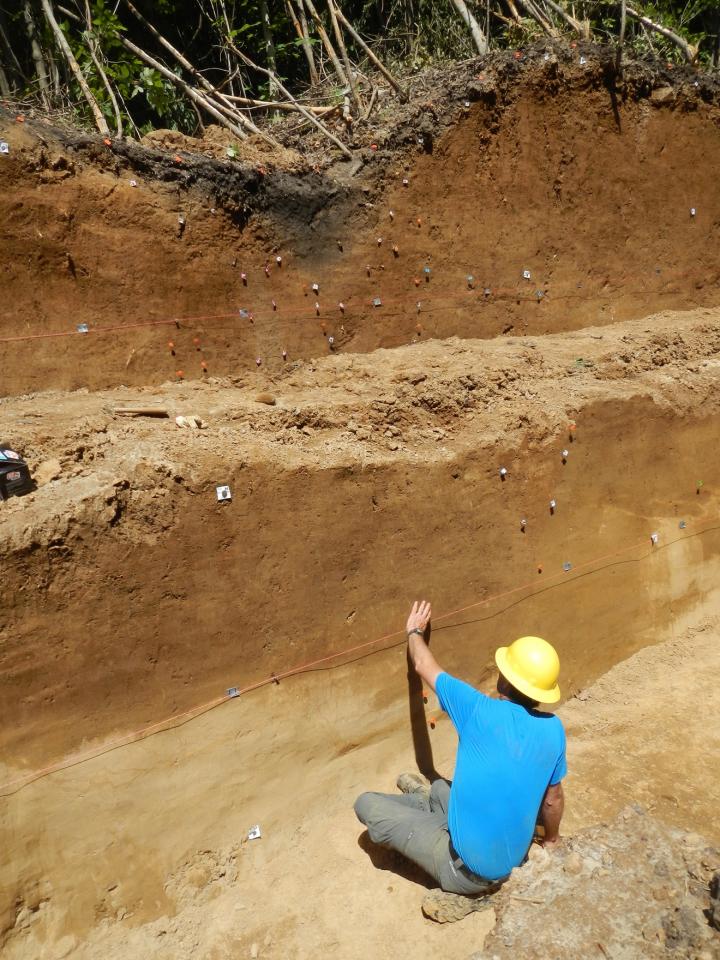 Richard Briggs, USGS, takes a close up look at the wall of the sackungen in the trench. The cracks from the earthquake occurred since deposition of the Peoria loess >11,000 years ago -- the light tan sediment seen here. Courtesy of Ryan Gold.

In 1811 and 1812, the region around New Madrid, Missouri, experienced a number of major earthquakes. The final and largest earthquake in this sequence occurred on the Reelfoot fault, and temporarily changed the course of the Mississippi River. These earthquakes are estimated to be just shy of magnitude 8.0 and devastated towns along the Mississippi River–soil liquefied, houses collapsed, and chimneys toppled.

Because of the 1811-1812 earthquakes, the New Madrid area is recognized as a high-hazard zone for potential future seismic events. Previous investigations found have also found evidence for multiple, older earthquake events preserved in the geologic record.

“We know there were also large earthquakes at ~1450 AD and at ~900 AD,” says Ryan Gold of the U.S. Geological Survey (USGS), but frequent earthqakes along the fault may not be the norm.

“If earthquakes happen on the Reelfoot fault every 500 years, and have been doing so for hundreds of thousands of years, we would expect to see a mountain range there — but we don't,” says Gold. Instead, he suggests the modest fault scarp associated with the Reelfoot fault indicate that the earthquakes haven't been sustained over a long period of time.

To test this, USGS researchers wanted to look beyond the last few thousand years. Preserving long-records of past earthquakes can be a challenge for the Reelfoot fault because natural processes like rain and occasional floods on the Mississippi River can conspire to erase the record of past earthquakes. “That's coupled with anthropogenic effects — lots of farming, forestry, [and] construction,” says Gold.

Instead of studying the fault directly, the USGS team moved to the rolling hills around the Mississippi River, east of the Reelfoot fault. They noted a high concentration of depressions called sackungen (German word meaning “to sag”) near the fault, and hypothesized that these sags are cracks in the ground caused by strong shaking from large earthquakes.

The USGS excavated a trench across one of the sackung that had formed in Peoria loess — silt that was blown in during the last glacial period until as recently as around 11,000 years ago. Gold explained how the team hypothesized that a sackung crack forms during an earthquake, the middle of the crack falls downward, and sediment washes in from the shoulders — thus recording the timing of the earthquake.

Their trench revealed four distinct packages of sediment, says Gold, adding he was pleased to see such a long record. “I figured we would only see the 1811 and 1812 earthquake sequence.”

In the sackung, they dated all four packages of sediment and found they corresponded to previously identified earthquakes that occurred on the Reelfoot fault: 1812 AD, ~1450 AD, ~900 AD, and ~2300 BC. Importantly, they didn't find evidence for any additional earthquakes in the interval from ~4,300 to ~11,000 years ago. If the earthquake record preserved in the sackung is complete, “our record confirms that the tempo of earthquakes hasn't been sustained,” says Gold.

Gold will present their findings on Tuesday at the Geological Society of America's Annual meeting in Indianapolis, Indiana. “Our results will hopefully encourage the seismic hazard community to consider the possibility that the tempo of faulting may be variable,” says Gold. “Sometimes there may be very long intervals between earthquakes and sometimes the earthquakes may be more closely spaced.”

The USGS team hopes their new results on New Madrid ruptures can provide insights to those who model risk and seismic hazard in the region. Gold says that refining and updating seismic hazards with more information on how a fault might rupture can help with building codes — designing buildings just right to keep us safe, but not over-designed, which can waste resources.

Session: Earthquakes and Deformation in Eastern North America and Other Continental Interiors: What We Know, What We Don't, What We Think, and Which Is Which?
https://gsa.confex.com/gsa/2018AM/webprogram/Session45415.html

The Geological Society of America, founded in 1888, is a scientific society with members from academia, government, and industry in more than 100 countries. Through its meetings, publications, and programs, GSA enhances the professional growth of its members and promotes the geosciences in the service of humankind. Headquartered in Boulder, Colorado, GSA encourages cooperative research among earth, life, planetary, and social scientists, fosters public dialogue on geoscience issues, and supports all levels of earth-science education.