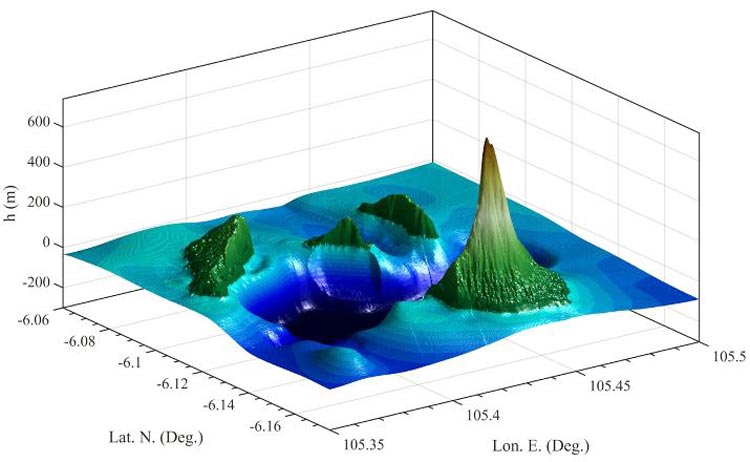 URI Professor Stéphan Grilli is keeping a close eye on volcanoes closer to the US.

An article recently published in the prestigious journal Nature Communications, written by University of Rhode Island College of Engineering Professor Stéphan Grilli and his colleagues, reveals new data on the Anak Krakatau volcano flank collapse, which was triggered by an eruption on December 22, 2018.

The tsunami created by the flank collapse hit the coast of Indonesia with waves as tall as 5 meters, leaving 420 people dead and 40,000 people displaced from their homes.

Ever since the eruption occurred, scientists have been collecting evidence to determine exactly how it happened, just as crime scene investigators attempt to recreate a crime scene.

“Up until now, a lot of the information we had was based on satellite images and conjecture,” said University of Rhode Island Distinguished Engineering Professor Stéphan Grilli. “Until there was real data, nobody could do any better.”

By combining new synthetic aperture radar (SAR) images, field observations from a marine geology underwater survey, and aerial photographs taken by drones, a more accurate model can now be created of the volcano before and after it collapsed.

New high-resolution seafloor and sub-seafloor hydroacoustic surveys have provided a comprehensive view of what the landslide deposits look like underwater.

“The renderings show how deep the sediment slid underwater and how large the pieces were that collapsed,” said Grilli.

The article in Nature Communications, which is considered one of the world’s leading multidisciplinary science journals, was published on May 14, 2021.

“For many researchers working in the natural sciences, publishing a paper in one of Nature’s journals is really an honor and a sign that one’s work is being recognized by the scientific community,” said Grilli. “This also brings great visibility to the work, which is important because as we improve our understanding and modeling of how tsunamis are generated by natural hazards, we can improve our mitigation of their effects in coastal areas and hopefully save lives.”

Most of Stéphan Grilli’s peers who are co-authors on the Nature article are from the United Kingdom and were funded by its Natural Environment Research Council.

As devastating as the tsunami caused by Anak Krakatau was, a potentially much greater threat exists closer to the United States.

According to Grilli, if one of the volcanoes in the Canary Islands in the North Atlantic Ocean off the coast of Northwest Africa was to erupt and suffer a large flank collapse, the results would be catastrophic.

“Our sights are on the Canary Islands because that volcano shows signs of becoming unstable and an eruption could cause a major landslide on one of its flanks, which studies have shown could be up to 2,000 times larger than what we saw in Indonesia,” said Grilli. “That could create a mega-tsunami, with the potential to cause inundations along the East Coast of the United State, in some areas twice as large as a category five hurricane. It could mean major destruction along the East Coast.”

On a smaller scale, but within the United States, Hawaii’s volcanoes pose a constant threat of eruption and flank collapses.

“If a piece of one of Hawaii’s volcanoes was to break off, it could create a significant tsunami,” said Grilli.

Despite advances in technology, there is still very little warning when a volcano is on the verge of eruption or a tsunami is forming as a result of it.

“We have high-frequency radar and systems that can monitor surface currents, including those caused by tsunamis, but we’re still a long way from being able to predict when an earthquake, volcano eruption or tsunami may occur,” said Grilli.

After Japan was struck by an earthquake with a magnitude of 9.0 in 2011, resulting in a tsunami and a nuclear power-plant accident, which left close to 18,000 people dead, the country spent $12 billion to build 42-foot-high concrete seawalls.

The walls block the view of the ocean, but experts say the barriers are worth it, as they should minimize damage and buy time for evacuation. In some areas of the United States, such as along the Cascadia subduction zone off of Northern California, Oregon, and Washington, there would be very little time to retreat to safe ground should a large earthquake and tsunami occur.

“In Oregon, people are worried about evacuation if we had ‘The Big One,'” said Grilli. “Even though people have built artificial hills for a vertical evacuation, at most there would be a 15-minute tsunami warning. There just wouldn’t be enough time to get everyone to safety.”

Drone footage of Anak Krakatau, taken on January 10-11, 2019, after the collapse and eruption of the volcano. YouTube video by Earth Uncut TV. Not for commercial use.