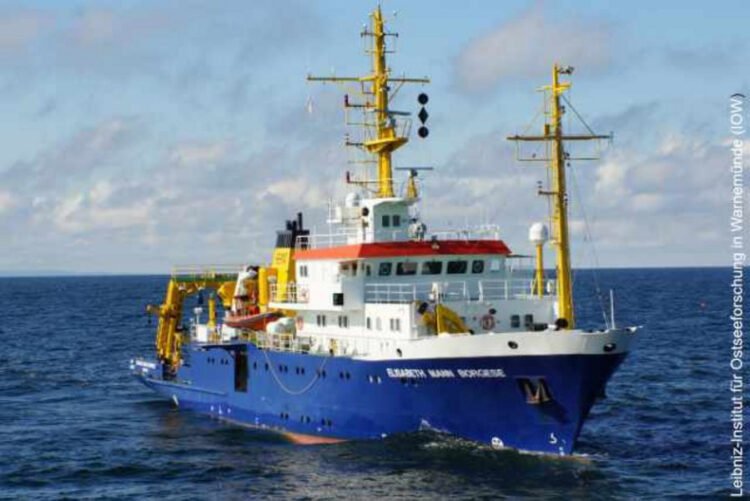 With the research vessel Elisabeth Mann Borgese, the research team set out to collect seawater samples in the Baltic Sea. The geologists hope to gain insights into the oxygen content of the early oceans by determining tungsten isotopes in ancient sediment samples.
Credit: Leibniz Institute for Baltic Sea Research Warnemünde (IOW)

Oxygen is essential for the development of higher life.

However, it was hardly present in the oceans of the young Earth. It was not until the evolution of photosynthetic bacteria that the oceans saw a significant increase in oxygen levels. By measuring tungsten isotope composition, an international research team with the participation of scientists from the University of Cologne’s Institute of Geology and Mineralogy has now laid the foundation for a more precise determination of the development of oxygen levels in the early oceans over time.

Prospectively, they expect more precise insights into the evolution of life. In cooperation with scientists from ETH Zurich, the Universities of Bern and Tübingen, and the Leibniz Institute for Baltic Sea Research Warnemünde (IOW), geologists led by Dr Florian Kurzweil at the University of Cologne analysed the chemical element tungsten, which could act as an indicator element for oxygen, in today’s seawater.

The results have been published in the Proceedings of the National Academy of Sciences (PNAS) under the title ‘Redox control on the tungsten isotope composition of seawater’. The research is part of the German Research Foundation’s priority programme ‘Building a Habitable Earth’.

In a basin more than 400 metres deep in the Baltic Sea, the research team took various water samples, both in the oxygen-rich surface water and in the oxygen-deficient deep water. Oxide minerals form along the boundary of both water layers, preferentially binding the light tungsten. The tungsten remaining in the seawater thus becomes relatively heavier. Oxygen is required to form oxide minerals, so the oxygen concentration of the oceans ultimately correlates with the tungsten isotope composition of the seawater.

‘Increasing oxygen concentrations in the oceans of the early Earth should have led to increased formation of the oxide minerals, and thus to isotopically heavier marine tungsten,’ said the head of the research expedition Dr Florian Kurzweil.

The scientists now want to show that this development has been preserved in marine sediments. The composition of tungsten isotopes of the oldest sediments on Earth could then trace the development of marine oxygen levels over the course of Earth’s history like a genetic fingerprint.