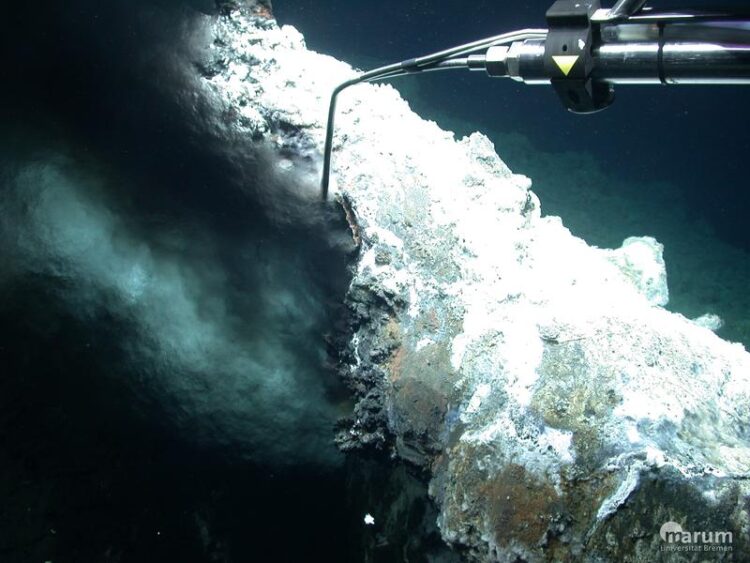 The temperature measurement with the MARUM-QUEST in the outflow opening of the black smoker showed that the fluids at the newly discovered hydrothermal field are more than 300°C hot.
Credit: MARUM - Center for Marine Environmental Sciences, University of Bremen

Hot springs occur worldwide at spreading ridges of the Earth’s plates. On the 500 kilometer long Knipovich Ridge, located between Greenland and Spitsbergen, hydrothermal vents were previously unknown. During the 109th expedition with the research vessel MARIA S. MERIAN, researchers from Bremen and Norway have now discovered for the first time a field with numerous hydrothermal vents on the Knipovich Ridge.

“Following indications in the water column of hydrothermal activity, we searched the ocean floor with the remotely operated vehicle MARUM-QUEST. We were very happy when we discovered an active black smoker. The metal-containing liquid, which was over 300 degrees Celsius, shot out as if from a stovepipe and turned into a black cloud, the spread of which we could no longer monitor with the ROV,” says Prof. Gerhard Bohrmann from MARUM – Center for Marine Environmental Sciences at the university Bremen, Chief Scientist of Expedition MSM 109.

The black smoker is part of a larger hydrothermal field at least a kilometer long and about 200 meters wide in a water depth of about 3,000 meters. The numerous outflow sites are very different. Warm fluid leaks associated with white precipitates, microbial flocs and filaments, and many small organisms were observed, shimmering in the ROV’s headlights. Other vents have led to massive chemical precipitation and sometimes form several meter-high mounds on the sea floor. In agreement with their Norwegian colleagues, the researchers named a particularly diverse hydrothermal edifice with numerous chimneys and protruding flanges “Yggdrasil”, the name for the tree of life in Norse mythology. “With such a new finding, so far north at 77°20′ north, we wanted to use names from the Nordic culture when naming it. At the suggestion of our Norwegian colleagues, we named the entire field “Jøtul hydrothermal field””, explains Gerhard Bohrmann. In Norse mythology, Jøtul refers to a giant who lives in the mountains.

The aim of the research cruise was to find hydrothermal activity at the Knipovich Ridge, a spreading ridge that forms the interface between the North American and Eurasian tectonic plates in the Norwegian Greenland Sea. “Such hydrothermal vents on the ocean floor were previously completely unknown on the Knipovich Ridge, although they have been searched for several times. The special feature is the extremely low spreading rates of only 1.4 centimeters per year. New seafloor is therefore formed very slowly here. Hydrothermal circulation could therefore proceed differently than at normal or rapidly expanding plate boundaries,” explains Gerhard Bohrmann.

Hydrothermal vents are considered oases of life in the deep sea, which strongly shape the ecosystem in the deep sea and whose importance for processes on and in the ocean floor is not yet completely understood.

In about two years, researchers from MARUM will return to the Knipovich Ridge to investigate the newly discovered Jøtul hydrothermal field in more detail during an expedition. Until then, the participants of the MSM 109 cruise will evaluate and publish the new data.

The current cruise is part of the research program in the Bremen Cluster of Excellence “The Ocean Floor – Earth’s Uncharted Interface”. The remotely operated vehicle MARUM-QUEST and, for surveying and mapping in the study area, the autonomous underwater vehicle MARUM-SEAL were used.

MARUM produces fundamental scientific knowledge about the role of the ocean and the ocean floor in the total Earth system. The dynamics of the ocean and the ocean floor significantly impact the entire Earth system through the interaction of geological, physical, biological and chemical processes. These influence both the climate and the global carbon cycle, and create unique biological systems. MARUM is committed to fundamental and unbiased research in the interests of society and the marine environment, and in accordance with the Sustainable Development Goals of the United Nations. It publishes its quality-assured scientific data and makes it publicly available. MARUM informs the public about new discoveries in the marine environment and provides practical knowledge through its dialogue with society. MARUM cooperates with commercial and industrial partners in accordance with its goal of protecting the marine environment.