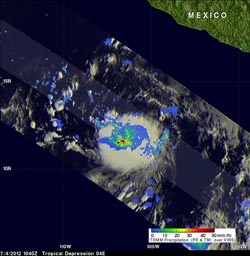 When TRMM passed over TD 4E on July 4, 2012, it saw strong convective storms were dropping heavy rainfall (red) near the center of the tropical depression's center of circulation. That rain was falling at a rate of more than 2 inches/50 mm per hour. TRMM's Precipitation Radar (PR) instrument found that a few of these towering storms reached heights of about 15 km (~9.3 miles).<br>Credit: SSAI/NASA, Hal Pierce <br>

The TRMM satellite got a very good look at recently formed Tropical Depression 4E (TD 4E) at 1040 UTC (6:40 a.m. EDT) on July 4, 2012. The hot towering cumulonimbus clouds called “hot towers” shooting up like a roman candle around the center of circulation provide the fireworks for the depression.

A “hot tower” is a rain cloud that reaches at least to the top of the troposphere, the lowest layer of the atmosphere. It extends approximately nine miles (14.5 km) high in the tropics. These towers are called “hot” because they rise to such altitude due to the large amount of latent heat. Water vapor releases this latent heat as it condenses into liquid.

Research by Owen Kelley and John Stout of George Mason University and NASA's Goddard Space Flight Center, Greenbelt, Md., shows that a tropical cyclone with a hot tower in its eyewall was twice as likely to intensify within the next six hours than a cyclone that lacked a tower and Tropical Depression 4E became Daniel by 11 a.m. EDT on July 5.

When TRMM passed over TD 4E, rainfall data from TRMM's Microwave Imager (TMI) and Precipitation Radar (PR) instruments revealed that strong convective storms were dropping heavy rainfall near the center of the tropical depression's center of circulation. TRMM's Precipitation Radar (PR) instrument found that a few of these towering storms reached heights of about 15 km (~9.3 miles). TRMM PR also found that rainfall within TD 4E was returning reflectivity values of over 51.5 dBZ. Those data provided additional proof that heavy rainfall was occurring within TD 4E.

At 11 a.m. EDT (8 a.m. PDT) on July 5, 2012, Tropical Depression 4E became Tropical Storm Danie with maximum sustained winds now near 45 mph (75 kmh). It was located near latitude 14.2 north and longitude 110.5 west. That's about 600 miles (970 km) south of the southern tip of Baja California. Daniel is moving toward the west-northwest near 12 mph (19 kmh). That general motion is forecast to continue, followed by a turn to the west, according to the National Hurricane Center.