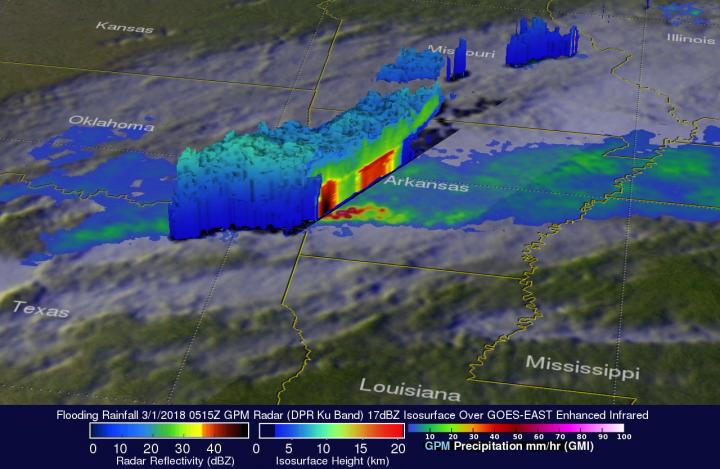 On Feb. 28, 2018 at 11:15 p.m. CST, GPM data was used to create 3-D views that showed intense storms extending from Oklahoma into southwestern Arkansas. Storm tops in the area were shown by GPM to reach heights above 5.6 miles (9 km). Credit: NASA / JAXA, Hal Pierce

NOAA's National Weather Service has issued flood advisories and flood warnings for large areas of Arkansas and Tennessee on March 1. Large parts of the Ohio Valley and Mississippi valley have received flooding rainfall during the past week. Arkansas has seen more rain than any other state.

Life threatening flood conditions have resulted from over 10 inches (254 mm) of rain falling in extensive areas of central Arkansas.

The GPM core observatory satellite had an excellent view of the storms that were producing flooding rainfall in Arkansas when it flew above the state on Wednesday February 28, 2018 at 11:15 p.m. CST (March 1 at 0515 UTC). A rainfall analysis was derived from data received by the satellite with GPM's microwave Imager (GMI) and Dual Frequency Precipitation Radar (DPR) instruments.

GPM's radar passed directly above storms that were dropping heavy rain over southwestern Arkansas. GPM's radar (DPR) indicated that some of these storms were dropping rain at greater than 5.1 inches (30.7 mm) per hour. GPM is a joint mission between NASA and the Japan Aerospace Exploration Agency, JAXA.

At NASA's Goddard Space Flight Center in Greenbelt, Md. the GPM satellite's 3-D radar data (DPR Ku Band) were used to show the vertical structure of precipitation falling over Arkansas. These 3-D views use GPM's radar data to reveal simulated cross-sections of intense storms that were extending from Oklahoma into southwestern Arkansas. Storm tops in the area were shown by GPM to reach heights above 5.6 miles (9 km).

On March 1, the National Weather Service in Little Rock, Arkansas noted “Much of central and southern Arkansas has seen between one and three inches, with isolated higher amounts, of rainfall over the last 24 hours. This has only aggravated the flooding situation across the area. Excessive runoff will continue today, even well after the rain ends.”