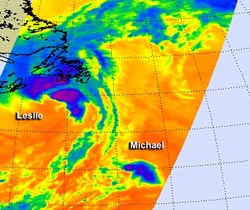 Tropical Storm Michael forecast to become a remnant low later today, Sept. 11, but as of 11 a.m. EDT Michael still had maximum sustained winds near 45 mph (75 kmh). It was located about 1,090 miles (1,755 km) west of the Azores. Michael is moving to the north-northeast 23 mph (37 kmh) and this motion is expected to continue during the next day or so.

In the AIRS infrared image from around 1 a.m. EDT on Sept. 11, the strongest area of convection (and thunderstorms) appeared to be over Michael's north and eastern quadrants making the storm appear peanut-shaped on NASA satellite imagery. An infrared satellite image of Michael later on Sept. 11 showed that most of the convection has disappeared and Michael appeared as tight swirl of low clouds. Michael is over cool waters and in an environment of strong wind shear, two factors that are weakening the storm quickly. The National Hurricane Center forecast notes that Michael's remnants should then become absorbed by a front in the next day or two.

According to the Canadian Hurricane Centre, Leslie made landfall Tuesday, Sept. 10 in Fortune, Newfoundland, at about 8:30 a.m. AST (7:30 a.m. EDT) with maximum sustained winds near 40 mph (65 kmh). The Seattle Post Intelligencer newspaper reports power outages and flight cancellations. Canadian Broadcasting Corporation news reported heavy rainfall and wind gusts up to 82 mph (132 kmh) over the Avalon Peninsula, including St. John's that caused power outages, and downed trees. Leslie became a post-tropical cyclone as it begins to move away from Newfoundland.

The Canadian Hurricane Center discontinued the hurricane watch for southeastern Newfoundland early on Sept. 11, but a tropical storm warning is in effect for Newfoundland from Indian Harbour to Triton.

AIRS infrared imagery from 1 a.m. EDT on Sept. 11 showed strong thunderstorms around Leslie's center and in bands to the north of the center. At 11 a.m. EDT on Sept. 11, the center of post-tropical cyclone Leslie was located near latitude 49.4 north, longitude 53.6 west, about 130 miles (210 km) north-northwest of St. Johns Newfoundland. The post-tropical cyclone is moving toward the north-northeast at 45 mph (72 kmh).

Leslie's remnants are expected to skirt southern Iceland on Thursday, Sept. 12 before heading toward Scotland sometime on Sept. 13.