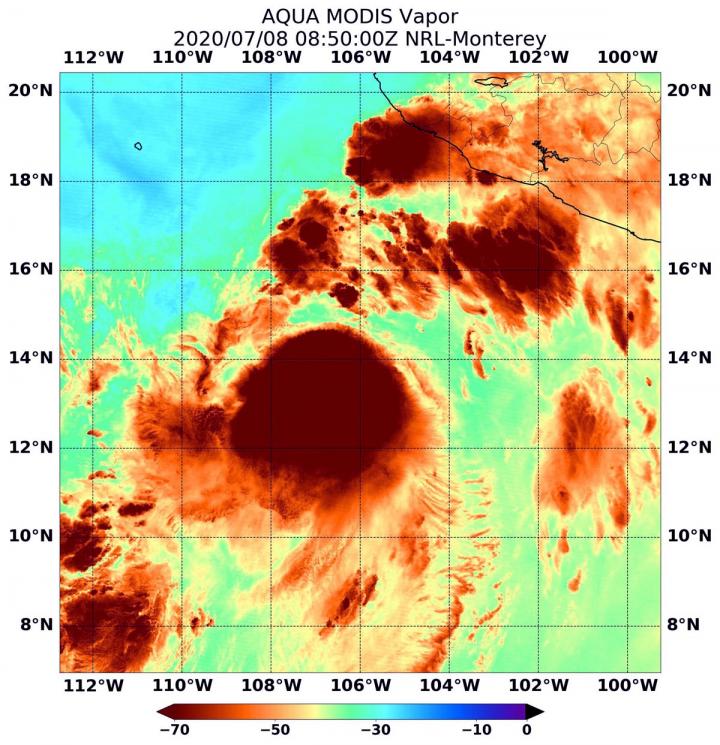 Water vapor analysis of tropical cyclones tells forecasters how much potential a storm has to develop. Water vapor releases latent heat as it condenses into liquid. That liquid becomes clouds and thunderstorms that make up a tropical cyclone.

Temperature is important when trying to understand how strong storms can be. The higher the cloud tops, the colder and the stronger the storms.

The National Hurricane Center noted that satellite images show that the convective organization of Cristina is gradually improving, while bands of thunderstorms are developing across the northern portion of the circulation.

The center of Cristina's circulation was still under the northeastern side of the main area of convection due to moderate vertical wind shear, but that wind shear appears to be diminishing.

Cristina is moving toward the northwest near 12 mph (19 kph). A turn to the west-northwest is expected by tonight, and that motion is expected to continue for the next few days. On the forecast track, the cyclone will remain well offshore the coast of Mexico. The estimated minimum central pressure is 998 millibars.

Maximum sustained winds are near 60 mph (95 kph) with higher gusts. Gradual strengthening is expected over the next couple of days, and Cristina is forecast to become a hurricane on Thursday.

National Hurricane Center forecaster Andrew Latto noted, “The decreasing shear over Cristina combined with warm sea surface temperatures and a moist air mass should allow the cyclone to intensify over the next couple of days.”

NASA's Aqua satellite is one in a fleet of NASA satellites that provide data for hurricane research.

Tropical cyclones/hurricanes are the most powerful weather events on Earth. NASA's expertise in space and scientific exploration contributes to essential services provided to the American people by other federal agencies, such as hurricane weather forecasting.