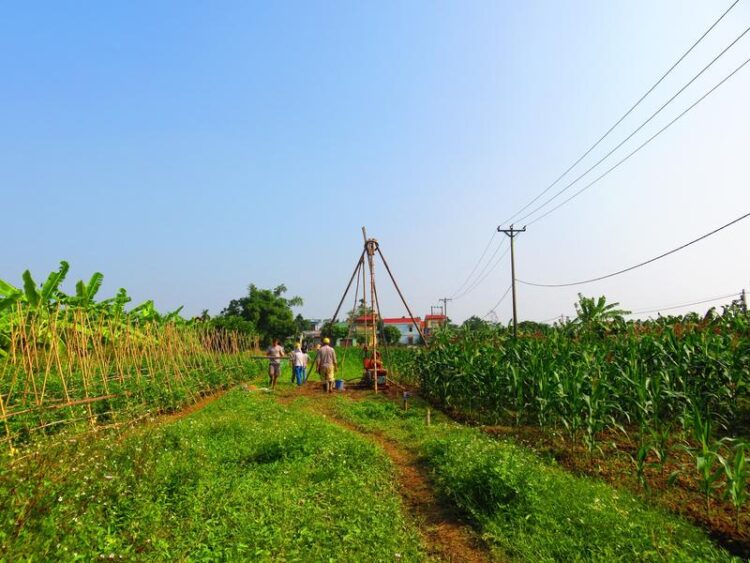 Arsenic is a toxin now widely present in rivers and groundwater in countries such as Bangladesh and Vietnam. It is released by the activity of microorganisms. Yet for a long time it was unclear what the microorganisms ate to release the arsenic. A team of geomicrobiologists led by Professor Andreas Kappler from the University of Tübingen has shown that the microbes break down arsenic-bearing sediments using organic compounds from deep layers as food, disproving theories that the fuel for their activity was drawn from plants or algae on the surface.

Now the team has also shown that along with the organic materials in the sediments, methane gas is an important source of food for the bacteria and also plays a key role in their release of arsenic. This new mechanism responsible for arsenic mobilization can explain elevated concentration of arsenic in many aquifers and will help to more precisely predict future drinking water contamination. The study has been published in the journal Nature Communications Earth & Environment.

Arsenic-containing iron minerals originally from the Himalaya can nowadays be found in the subsurface sediments of many river deltas in southeast Asia. These aquifer sediments host diverse assemblages of microorganisms which were thought to be responsible for the dissolution of the iron minerals and the release of arsenic. “After our previous study, we assumed that they run their metabolism and growth off organic material in the sediments,” says doctoral researcher Martyna Glodowska, lead author of the current study.

The Tübingen scientists, working with international colleagues, investigated an arsenic-contaminated groundwater system in VanPhuc, a village 15 kilometers south-east of Hanoi in Vietnam. “There we observed large concentrations of the greenhouse gas methane – in some cases at such high concentrations that the methane even bubbled out from water brought to the surface,” says Andreas Kappler. Methane is the main component of the natural gas used as an energy source in households and in industry. “That gave us the idea that it could also be used as energy source by the arsenic-mobilizing microorganisms,” says Glodowska.

Experiments carried out in the laboratory in Tübingen – in which methane was added to sediment samples from Vietnam – enabled the researchers to prove that theory. “In doing this, we discovered a new mechanism leading to arsenic mobilization,” says Kappler. “Methane produced by other microorganisms in the subsurface seems to drive arsenic mobilization by methane-eating and mineral-dissolving bacteria,” he adds.

A comparative analysis of other aquifers worldwide revealed that many of them contain large amounts of methane and a high abundance of bacteria which either produce or use it. “Therefore the mobilization of arsenic by methane-oxidizing microorganisms could be an important mechanism in the contamination of groundwater with arsenic in many places around the world,” Kappler says. “We now need to understand how abundant these bacteria are in arsenic-iron-mineral bearing groundwater systems,” Professor Kappler says. Martyna Glodowska adds: “It is a crucial step that we have identified both methane as a food source and the microorganisms mediating the process of arsenic release into groundwater.”

Hungry or full: It comes down to the atomic details

Researchers in Bayreuth discover novel sensors. Due to their iridescent colors, opals have been considered particularly precious gemstones since antiquity. The way these stones shimmer is caused by their nanostructures….