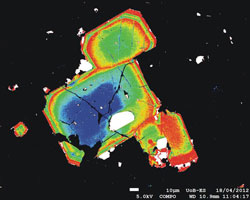 False colour image of zoned orthopyroxene crystal used in forensic-style analysis of Mount St Helens 1980 eruption. Different colours reflect different chemical compositions. Yellow, for example, denotes particularly high amounts of iron.<br><br>Copyright: Dr. Kate Saunders, University of Bristol. Please note: the image is for single use only to illustrate this press release and is not to be archived.<br>

How processes below a volcano are linked to seismic signals at the surface is described by scientists from the petrology group of the Ruhr-Universität Bochum and their colleagues from Bristol in a paper published today in Science. They analyzed the growth of crystals in the magma chamber and used results obtained from the monitoring of seismic signals. The research could ultimately help to predict future volcanic eruptions with greater accuracy.

A few kilometers below the volcano a liquid reservoir exists, the magma chamber, which feeds volcanic eruptions. Zoned crystals grow concentrically like tree rings within the magma body and contain critical information. Individual zones have subtly different chemical compositions, reflecting the changes in physical conditions (for example the temperature) within the magma chamber and thus give an indication of volcanic processes and the timescales over which they occur. During a volcanic eruption, crystals are thrown to the surface in conjunction with the liquid parts of the magma, which quickly petrifies and thus can be sampled.

The researchers analyzed the chemical composition of crystals from Mount St. Helens and linked these data to seismic observations of the deadly 1980 Mount St. Helens eruption. The peaks in crystal growth were found to correlate with increased seismicity and gas emissions in the months prior to the eruption. An increase in crystal growth is also evidence of pulses of magma entering a growing chamber within the volcano, which finally triggers the eruption. In this way, the researchers confirmed what has long been anticipated: a clear evidence of the correlation between crystal growth (fresh magma input) and volcanic seismicity.

Time scales: An expertise of Bochum

The extraction of time scales of different kinds of processes from zoned crystals is an expertise of the petrology group at the Institute for Geology, Mineralogy, and Geophysics in Bochum. A similar study on eruptions from another active volcano, Mt. Etna in Italy, was carried out by Bochum scientists in collaboration with scientists from Singapore and Pisa (published in Earth and Planetary Science Letters, 2011). For these kinds of studies the researchers use information on how fast certain elements move through minerals (diffusion). The determination of diffusion rates in minerals is another research focus of the petrologists in Bochum.

A relevant study for millions of people

Over 500 million people live close to volcanoes which may erupt with little or no clear warning, causing widespread devastation, disruption to aviation and even global effects on climate. Many of the world’s volcanoes are monitored for changes such as increases in seismicity or ground deformation. However, an on-going problem for volcanologists is linking observations at the surface to processes occurring underground. This forensic approach applied by the English-German team can be also applied to other active volcanoes to shed new light upon the nature and timescale of pre-eruptive activity. This will help scientists to evaluate monitoring signals at restless volcanoes and enable better forecasting of future eruptions.