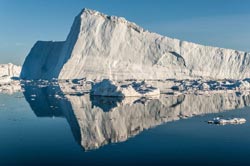 Researchers from the University of Washington and the German Space Agency (DLR) measured the dramatic speeds of the fast-flowing glacier in 2012 and 2013. The results are published today in The Cryosphere, an open access journal of the European Geosciences Union (EGU).

“We are now seeing summer speeds more than 4 times what they were in the 1990s on a glacier which at that time was believed to be one of the fastest, if not the fastest, glacier in Greenland,” says Ian Joughin, a researcher at the Polar Science Center, University of Washington and lead-author of the study.

In the summer of 2012 the glacier reached a record speed of more than 17 kilometres per year, or over 46 metres per day. These flow rates are unprecedented: they appear to be the fastest ever recorded for any glacier or ice stream in Greenland or Antarctica, the researchers say.

They note that summer speeds are temporary, with the glacier flowing more slowly over the winter months. But they add that even the annually averaged speedup over the past couple of years is nearly 3 times what it was in the 1990s.

This speedup of Jakobshavn Isbræ means that the glacier is adding more and more ice to the ocean, contributing to sea-level rise. “We know that from 2000 to 2010 this glacier alone increased sea level by about 1 mm. With the additional speed it likely will contribute a bit more than this over the next decade,” explains Joughin.

Jakobshavn Isbræ, which is widely believed to be the glacier that produced the large iceberg that sank the Titanic in 1912, drains the Greenland ice sheet into a deep ocean fjord on the coast of the island. At its calving front, where the glacier effectively ends as it breaks off into icebergs, some of the ice melts while the rest is pushed out, floating into the ocean. Both of these processes contribute about the same amount to sea-level rise from Greenland.

As the Arctic region warms, Greenland glaciers such as Jakobshavn Isbræ have been thinning and calving icebergs further and further inland. This means that, even though the glacier is flowing towards the coast and carrying more ice into the ocean, its calving front is actually retreating. In 2012 and 2013, the front retreated more than a kilometre further inland than in previous summers, the scientists write in the new The Cryosphere study.

In the case of Jakobshavn Isbræ, the thinning and retreat coincides with an increase in speed. The calving front of the glacier is now located in a deeper area of the fjord, where the underlying rock bed is about 1300 metres below sea level, which the scientists say explains the record speeds it has achieved. “As the glacier’s calving front retreats into deeper regions, it loses ice – the ice in front that is holding back the flow – causing it to speed up,” Joughin clarifies.

The team used satellite data to measure the speed of the glacier as part of US National Science Foundation (NSF) and NASA studies. “We used computers to compare pairs of images acquired by the German Space Agency’s (DLR) TerraSAR-X satellites. As the glacier moves we can track changes between images to produce maps of the ice flow velocity,” says Joughin.

The researchers believe Jakobshavn Isbræ is in an unstable state, meaning it will continue to retreat further inland in the future. By the end of this century, its calving front could retreat as far back as the head of the fjord through which the glacier flows, about 50 km upstream from where it is today.

Please mention the name of the publication (The Cryosphere) if reporting on this story and, if reporting online, include a link to the paper or to the journal website (http://www.the-cryosphere.net).

*More information*
This research is presented in the brief communication ‘Further summer speedup of Jakobshavn Isbræ’ to appear in the EGU open access journal The Cryosphere on 3 February 2014.

The researchers produced the data presented in the study under the NASA-sponsored Greenland Ice Mapping Project, and carried out the analysis of the data at the Center for Remote Sensing of Ice Sheets, sponsored by the US National Science Foundation.

The scientific article is available online, free of charge, from the publication date onwards, at http://www.the-cryosphere.net/recent_papers.html. *To obtain a copy of the paper before the publication date, please email Bárbara Ferreira at media@egu.eu.*

The team is composed of Ian Joughin, Benjamin E. Smith and David E. Shean from the University of Washington, Seattle, US, and Dana Floricioiu from the German Aerospace Center (DLR), Weßling, Germany.

The European Geosciences Union (www.egu.eu) is Europe’s premier geosciences union, dedicated to the pursuit of excellence in the Earth, planetary, and space sciences for the benefit of humanity, worldwide. It is a non-profit interdisciplinary learned association of scientists founded in 2002. The EGU has a current portfolio of 15 diverse scientific journals, which use an innovative open access format, and organises a number of topical meetings, and education and outreach activities. Its annual General Assembly is the largest and most prominent European geosciences event, attracting over 11,000 scientists from all over the world. The meeting’s sessions cover a wide range of topics, including volcanology, planetary exploration, the Earth’s internal structure and atmosphere, climate, energy, and resources. The 2014 EGU General Assembly is taking place is Vienna, Austria from 27 April to 2 May 2014. For information regarding the press centre at the meeting and media registration, please check http://media.egu.eu.

If you wish to receive our press releases via email, please use the Press Release Subscription Form at http://www.egu.eu/news/subscribe/. Subscribed journalists and other members of the media receive EGU press releases under embargo (if applicable) 24 hours in advance of public dissemination.