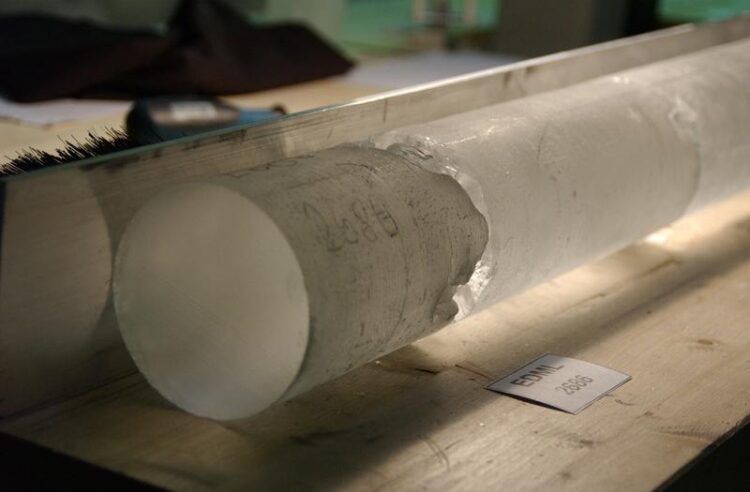 At high elevations of the Greenland Ice Sheet, the years 2001 to 2011 were 1.5 °C warmer than in the 20th century and represent the warmest decade in the last thousand years.

A temperature reconstruction from ice cores of the past 1,000 years reveals that today’s warming in central-north Greenland is surprisingly pronounced. The most recent decade surveyed in a study, the years 2001 to 2011, was the warmest in the past 1,000 years, and the region is now 1.5 °C warmer than during the 20th century, as researchers led by the Alfred Wegener Institute just report in the journal Nature. Using a set of ice cores unprecedented in length and quality, they reconstructed past temperatures in central-north Greenland and melting rates of the ice sheet.

The Greenland Ice Sheet plays a pivotal part in the global climate system. With enormous amounts of water stored in the ice (about 3 million cubic kilometres), melt and resulting sea-level rise is considered a potential tipping point. For unmitigated global emissions rates (‘business as usual’), the ice sheet is projected to contribute up to 50 centimetres to global mean sea-level by 2100. Weather stations along the coast have been recording rising temperatures for many years. But the influence of global warming on the up to 3,000 m elevated parts of the ice sheet have remained unclear to due to the lack of long-term observations. In a study now published in Nature, experts from the Alfred Wegener Institute, Helmholtz Centre for Polar and Marine Research (AWI) present clear evidence that effects of global warming have reached the remote, high-elevation areas of central-north Greenland.

“The time series we recovered from ice cores now continuously covers more than 1,000 years, from year 1000 to 2011. This data shows that the warming in 2001 to 2011 clearly differs from natural variations during the past 1,000 years. Although grimly expected in the light of global warming, we were surprised by how evident this difference really was,” says AWI glaciologist Dr Maria Hörhold, lead author of the study. Together with colleagues from AWI and the University of Copenhagen’s Niels Bohr Institute, she analysed the isotope composition in shallow ice cores gathered in central-north Greenland during dedicated AWI expeditions.

Previous ice cores obtained at co-located sites starting in the 1990s, did not indicate clear warming in central-north Greenland, despite rising global mean temperatures. Part of the reason is substantial natural climate variability in the region.

The AWI researchers have now extended the previous datasets up to winter 2011/2012 by a dedicated redrilling effort, recovering time series unprecedented length and quality. The temperatures were reconstructed by using consistently one single method for the entire record in the lab: measuring concentrations of stable oxygen isotopes within the ice, which vary with the temperatures prevailing at times of ice formation. Previous studies had to draw on a range of different climate archives and combine results to reconstruct temperature, introducing much larger uncertainties in the assessment of natural variability.

In addition to the temperature, the team reconstructed the melt production of the ice sheet. Melting has increased substantially in Greenland since the 2000s and now significantly contributes to global sea-level rise. “We were amazed to see how closely temperatures inland are connected to Greenland-wide meltwater drainage – which, after all, occurs in low-elevation areas along the rim of the ice sheet near the coast,” says Maria Hörhold.

In order to quantify this connection between temperatures in high-elevation parts and melting along the edges of the ice sheet, the authors used data from a regional climate model for the years 1871 to 2011 and satellite observations of ice-mass changes for the years 2002 to 2021 from the GRACE/GRACE-FO gravimetry missions. This allowed them to convert the temperature variations identified in the ice cores into melting rates and provide estimates for the past 1,000 years. This represents an important dataset for climate research: better understanding of the melt dynamics of the ice sheet in the past improves projections of related future sea-level rise; reduced uncertainties in projections is one step to help optimize adaptation measures.

Another exciting finding from the study: the climate of the Greenland Ice Sheet is largely decoupled from the rest of the Arctic. This could be shown in comparison with the Arctic-wide temperature reconstruction ‘Arctic 2k’ (https://www.nature.com/articles/sdata201426). Although ‘Arctic 2k’ is an accurate representation of the circumpolar region, it does not reflect the conditions in central Greenland. “Our reconstruction now offers a robust representation of temperature evolution in central Greenland, which has proven to have a dynamic of its own,” says Prof. Thomas Laepple, AWI climate researcher and co-author of the study. “Actually, we had expected the time series to strongly covary with the warming of the Arctic region,” Laepple reports. But the authors have an explanation for these differences: the ice sheet is several kilometres thick; because of its height, Greenland is more affected by atmospheric circulation patterns than other parts of the Arctic. Temperature time series on the Arctic with regional resolution are needed, says Laepple, in order to reliably describe climate change in the Arctic.

Video footage (to be cited as: Alfred Wegener Institute/CNN) of the ice core drilling on Greenland in 2012 can be found here: https://we.tl/t-FtVEoWHH6Q