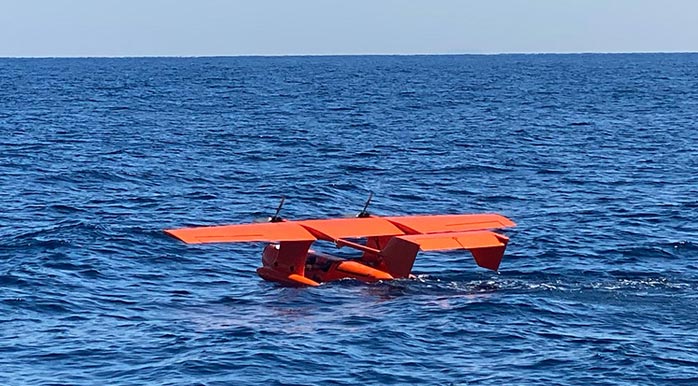 Measuring the position and topography of the earth’s crust is critical for understanding earthquake risk. Now, researchers led by the Institute of Industrial Science, The University of Tokyo have developed a novel method for monitoring the position of the seafloor with a drone-based observation device that could revolutionize oceanographic observation.

Changes in the earth’s surface occur as a result of tectonic forces accumulating in the crust, a process called crustal deformation. When forces that are exerted on the crust (stress) from the movement of tectonic plates exceed the strength of the rock, they can change its shape. Measuring these changes (geodetic measurements) can reveal the underlying tectonic processes and provide insights into seismic risk. However, approximately 70% of the earth’s surface lies underwater, presenting a unique set of challenges for monitoring.

“Measurement of the seafloor has traditionally been conducted using buoys or ocean-going vessels,” explains co-author Professor Yokota. “Seafloor stations need to communicate with vessels or buoys at the surface that, in turn, communicate with satellites to produce accurate positional information. But ocean conditions limit the mobility and speed of vessels at the surface.”

To address some of these challenges, the team developed a sea-surface landing unmanned aerial vehicle (UAV) as a sea surface monitoring device. A lightweight measurement device was mounted on the UAV, which moves over the sea surface and communicates with seafloor observation stations. The advantages of this system are the speed and efficiency of obtaining deep seafloor information.

“The mobility of this UAV means it’s possible to acquire deep geodetic measurements much more quickly and efficiently than before,” says co-author Professor Hirakawa. “Such high-speed UAV observation in the sea will not only contribute toward disaster prevention but also aid in the operation of autonomous underwater vehicles/remotely operated vehicles, and enable frequent marine biological and fisheries science observations.”

Next steps for the team include additional testing of the UAV at sea and further development of autonomous navigation and observation technology. Given the devastation that can be caused by earthquakes and tsunamis, accurate information that can help with prediction, such as that acquired by UAVs, is vital.