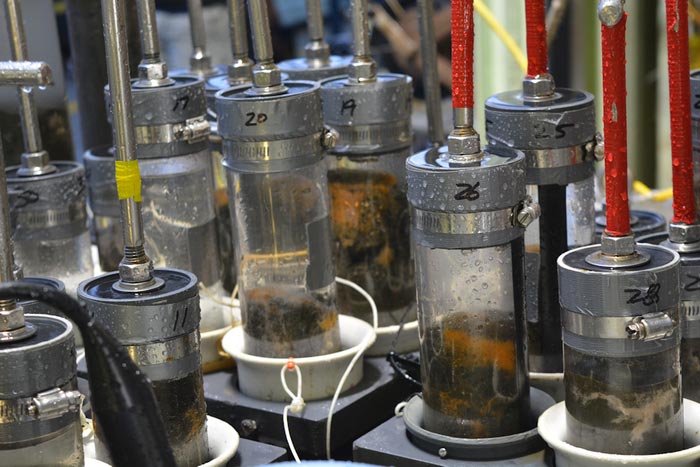 The isotopic compositions of hydrocarbon compounds are like a fingerprint. They can clearly indicate the way in which hydrocarbons like methane, ethane, propane, butane and pentane are formed. When hydrocarbons are combusted, water and carbon dioxide are produced and energy is released. Hydrocarbons, including crude oil and natural gas, are formed over geological time periods under high temperatures and pressures, and researchers can ultimately identify this process based on its particular isotope pattern.

While studying samples from the Guaymas Basin, however, researchers detected isotope patterns that did not fit with the well-known formation pathways. The samples were collected using the manned submersible vehicle Alvin during several expeditions with the research vessel ATLANTIS, so it was possible to precisely define the sampling locations and at the same time measure the temperature at the ocean floor. “In the Guaymas Basin, it is possible to witness oil formation as though it were in time-lapse,” explains co-author Dr. Florence Schubotz of MARUM. Large quantities of organic material are deposited as sediments in this basin, and these, in turn, are rapidly heated by the hydrothermal activity, which results in oil formation. This occurs very quickly compared to the millions of years needed for conventional oil formation at high pressure and temperature. In contrast to that process, the geological activity on the continental margin in the Guaymas Basin and the quantities of biological material deposited are the primary factors in the generation of hydrocarbons. Thus the basin operates like a pressure cooker. Because of this unique character, the Guaymas Basin is considered by researchers to be a model region for the rapid thermal alteration of sedimentary organic matter.

“These data surprised us, as we could not explain them with any known mechanisms. We brainstormed alternative explanations, considering what makes this system so special and what processes might take place in the deep subsurface that could have caused the unusual isotope pattern of hydrocarbon gases in our samples,” explains first author Dr. Min Song. In doing this, the researchers considered the role of volatile fatty acids, which are abundant in the Guaymas Basin subsurface, and conducted simulation experiments. For the first time, they have proposed an alternative pathway for the formation of the gases, which also explains the isotope signatures observed in the basin’s subsurface. Temperatures and pressures like those existing at hydrothermal systems were simulated in the laboratory of MARUM researcher Prof. Wolfgang Bach. Ethane and propane were generated from acetic acid without the influence of microorganisms.

Schubotz points out that this new explanation for an alternative formation process for hydrocarbons in the ocean floor can now be tested in other geothermally and hydrothermally heated sediment systems. For this reason, the results are an important contribution to the research at MARUM. Min Song’s colleagues in the Cluster of Excellence “The Ocean Floor – Earth’s Uncharted Interface” are involved in the study as well as international partners, including Prof. Andreas Teske of the University of North Carolina, Chapel Hill. “Our findings provide a convincing explanation for the unusual isotope patterns in hydrocarbon gases,” says co-cluster spokesperson and study leader Prof. Kai-Uwe Hinrichs. “The hydrocarbons here are not formed by splitting longer compounds into smaller components, but instead are generated from smaller building blocks.” No microorganisms are involved in this formation process, which is why this process falls into the category of abiotic formation. The findings will lead to a better understanding of the processes in the ocean floor, particularly with regard to the flow of carbon.

MARUM produces fundamental scientific knowledge about the role of the ocean and the seafloor in the total Earth system. The dynamics of the oceans and the seabed significantly impact the entire Earth system through the interaction of geological, physical, biological and chemical processes. These influence both the climate and the global carbon cycle, resulting in the creation of unique biological systems. MARUM is committed to fundamental and unbiased research in the interests of society, the marine environment, and in accordance with the sustainability goals of the United Nations. It publishes its quality-assured scientific data to make it publicly available. MARUM informs the public about new discoveries in the marine environment and provides practical knowledge through its dialogue with society. MARUM cooperation with companies and industrial partners is carried out in accordance with its goal of protecting the marine environment.