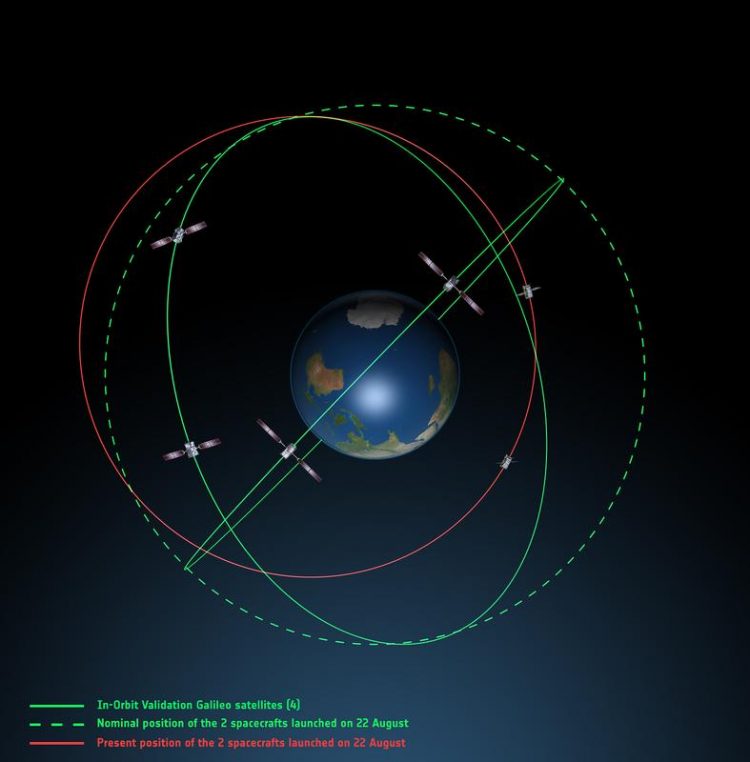 Orbits of the Galileo satellites ESA

“Milena“ and ”Doresa“ were designed to orbit the Earth at a constant height of 23,000 kilometers to deliver precise navigation data for Galileo, the European alternative to the GPS system. However, a frozen fuel line on the launch vehicle caused the satellites to be marooned in an elliptical orbit.

Consequently, their height above the Earth varies continuously between 17,500 and 25,000 kilometers. These fluctuations in height leave them unable to perform their intended task but ideal for the investigation of gravitational red shift, which is one of the central predictions of the general theory of relativity established by Albert Einstein 100 years ago.

The experiment providing the most precise data so far for the proof of the gravitational red shift took place in 1978. Two identical clocks were placed at a distance of 10,000 kilometers – one on Earth and one on a rocket.

In contrast to this one‐off experiment the Galileo satellites change their height by almost 8,000 kilometers twice a day, providing an enormous amount of data. Compared to the experiment in 1978, Laemmerzahl is expecting to show the effect of red shift with 10 times the precision and without the high costs associated with the design of a new research mission.

Photo material concerning the topic can be found under the following link: https://www.zarm.uni-bremen.de/pressmedia/single-view/article/errant-galileo-sat…