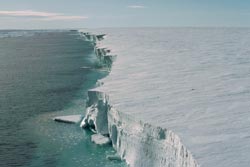 These predictions are made by climate researchers of the Alfred Wegener Institute for Polar and Marine Research in the Helmholtz Association in the coming issue of the British science magazine “Nature“. They refute the widespread assumption that ice shelves in the Weddell Sea would not be affected by the direct influences of global warming due to the peripheral location of the Sea.

The results of the climate modelers from the Alfred Wegener Institute will come as a surprise to the professional world with the majority of experts assuming that the consequences of global warming for Antarctica would be noticeable primarily in the Amundsen Sea and therefore in the western part of Antarctica. “The Weddell Sea was not really on the screen because we all thought that unlike the Amundsen Sea its warm waters would not be able to reach the ice shelves. But we found a mechanism which drives warm water towards the coast with an enormous impact on the Fichner-Ronne Ice Shelf in the coming decades“, says Dr. Hartmut Hellmer, oceanographer at the Alfred Wegener Institute and lead author of the study.

Using different model calculations, he and his colleagues Dr. Frank Kauker, Dr. Ralph Timmermann and Dr. Jürgen Determann as well as Dr. Jamie Rae from Met Office Hadley Centre, U.K., demonstrate that as a result of a chain reaction large ice masses could presumably slide into the ocean within the next six decades.

This chain reaction is triggered by rising air temperatures above the southeastern Weddell Sea. “Our models show that the warmer air will lead to the currently solid sea ice in the southern Weddell Sea becoming thinner and therefore more fragile and mobile in a few decades“, says Frank Kauker. If this happens, fundamental transport processes will change. “This will mean that a hydrographic front in the southern Weddell Sea will disappear which has so far prevented warm water from getting under the ice shelf. According to our calculations, this protective barrier will disintegrate by the end of this century“, explains Hartmut Hellmer.

An inflow of warmer water beneath the Filchner-Ronne Ice Shelf will melt the ice from below. “We expect the greatest melting rates near the so-called grounding line, the zone in which the ice shelf settles on the sea floor at the transition to the glacier. At this point the Filchner-Ronne Ice Shelf is melting today at a rate of around 5 metres per year. By the turn of the next century the melt rates will rise to up to 50 metres per year“, says Hellmer’s colleague Jürgen Determann.

How the ice streams behind will react in the event of a melt of such enormous proportions is currently being investigated by Jürgen Determann. One thing is obvious, however: “Ice shelves are like corks in the bottles for the ice streams behind them. They reduce the ice flow because they lodge in bays everywhere and rest on islands. If, however, the ice shelves melt from below, they become so thin that the dragging surfaces become smaller and the ice behind them starts to move“, explains Hartmut Hellmer. “If the high melting rates are completely compensated by inland ice flow, this loss in mass would correspond to an additional rise in global sea level of 4.4 millimetres per year”, adds Jürgen Determann. According to the latest estimates based on remote sensing data, global sea level rose for the period 2003-2010 at a rate of 1.5 millimetres per year due to melting of glaciers and ice shelves. This occurs in addition to the 1.7 millimetres per year due to thermal expansion of the oceans.

The forecasts of the current study are based on independent calculations of the ocean models BRIOS (Bremerhaven Regional Ice Ocean Simulations) and FESOM (Finite Element Sea Ice Ocean Model). The scientists used the atmospheric projections of the British Met Office Hadley Centre in Exeter as forcing data.

These included, for example, information on the future development of the wind and of the temperature in Antarctica. Hartmut Hellmer and his colleagues have thoroughly checked the model results for being realistic: “We started the BRIOS model in 1860 to see whether its results also represent the current situation. We found that this condition was satisfied. For example, the water temperatures for the Weddell Sea predicted by BRIOS are close to those we have actually measured in the recent past“, says Ralph Timmermann and adds: “The BRIOS model has been verified on many occasions in the past. It correctly predicts sea ice thickness, concentration, and drift as well as circulation patterns. And FESOM is well on the way to attaining BRIOS status. However, it has a far higher resolution, which is why we have to wait a long time until the computer has calculated several decades and more. BRIOS only needs less than a week for a century.“

The study was conducted as part of the EU-funded research programme “Ice2sea“. This project brings together scientists from 24 leading research institutions of the European Union and from Chile, Norway and Iceland. Together, the scientists aim for decoding the interactions between ice and climate and in this way facilitate more precise predictions about the effects of melting ice on sea level. More information on the Ice2sea project is available at www.ice2sea.eu

The Alfred Wegener Institute conducts research in the Arctic and Antarctic and in the high and mid-latitude oceans. The Institute coordinates German polar research and provides important infrastructure such as the research ice breaker Polarstern and research stations in the Arctic and Antarctic to the national and international scientific world. The Alfred Wegener Institute is one of the 18 research centres of the Helmholtz Association, the largest scientific organisation in Germany.