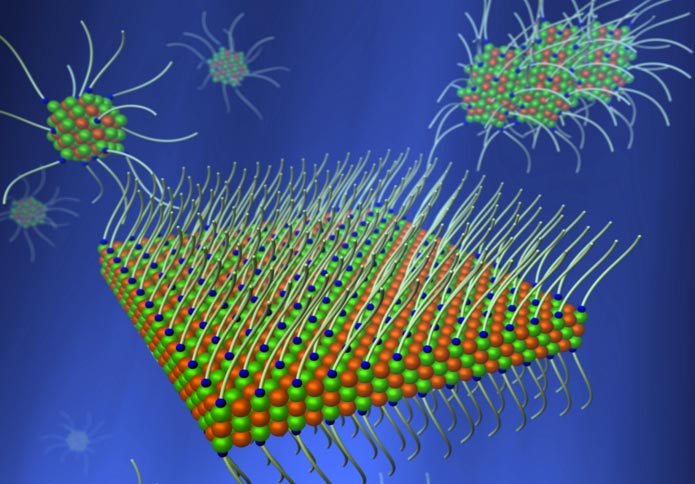 The synthesis of lead sulphide nanoparticles: the new appointments to a Swansea expert's team will strengthen research on nanocrystalline materials, which are used in solar cells, light-emitting diodes, and fast transistors
Credit: Christian Klinke, Swansea University

– solar cells and LEDs – with funding to expand scientists’ team.

An expert in nanomaterials who is based in Swansea and Germany has secured around £250,000 of funding from the Humboldt Foundation to recruit early-career scientists to join his research team.

Professor Christian Klinke, who works jointly at the University of Rostock in northern Germany and in Swansea University chemistry department, has been appointed as a Henriette Herz Scout by the Humboldt Foundation, one of the world’s most prestigious scientific organisations.

This allows him to select talented international scientists – one a year between now and 2024 – and recruit them for his research group.

Each scientist will receive a two-year fellowship from the Alexander von Humboldt Foundation.

The research group focuses on nanocrystalline materials, which are used in solar cells, light-emitting diodes, and fast transistors.  It examines their properties, which are often determined by quantum mechanical effects.

The group already receives research funds from the Humboldt Foundation, and the new appointments will further strengthen its work.

“The research projects of the scholarship holders will make an important contribution to the projects of our interdisciplinary working group.

Though based in Germany, the scholarship holders will carry out joint research in co-operation with Swansea groups and may be involved in teaching Swansea students.“

“This prestigious award further strengthens the links between Swansea Chemistry and the University of Rostock, with the joint research and teaching activities adding a new dimension to the nanomaterials research portfolio at Swansea.”

Every year, the Alexander von Humboldt Foundation enables more than 2,000 researchers from all over the world to undertake an academic stay in Germany. The Foundation maintains an interdisciplinary network of over 30,000 Humboldtians, including Professor Klinke, in more than 140 countries.

The Henriette Herz programme was introduced by the Foundation to support young scientists.

Henriette Herz (1764-1847) was a writer and organiser of literary salons and discussion groups on scientific and philosophical topics.  Participants included the von Humboldt brothers.

The programme aims to support female researchers in particular, which will be reflected in the appointments to be made by Professor Klinke.

Swansea University is a world-class, research-led, dual campus university offering a first-class student experience and has one of the best employability rates of graduates in the UK. The University has the highest possible rating for teaching – the Gold rating in the Teaching Excellence Framework (TEF) in 2018 and was commended for its high proportions of students achieving consistently outstanding outcomes.

Swansea climbed 14 places to 31st in the Guardian University Guide 2019, making us Wales’ top ranked university, with one of the best success rates of graduates gaining employment in the UK and the same overall satisfaction level as the Number 1 ranked university.

The 2014 Research Excellence Framework (REF) 2014 results saw Swansea make the ‘biggest leap among research-intensive institutions’ in the UK (Times Higher Education, December 2014) and achieved its ambition to be a top 30 research University, soaring up the league table to 26th in the UK.

The University is in the top 300 best universities in the world, ranked in the 251-300 group in The Times Higher Education World University rankings 2018.  Swansea University now has 23 main partners, awarding joint degrees and post-graduate qualifications.

The University was established in 1920 and was the first campus university in the UK. It currently offers around 350 undergraduate courses and 350 postgraduate courses to circa 20,000 undergraduate and postgraduate students.  The University has ambitious expansion plans as it moves towards its centenary in 2020 and aims to continue to extend its global reach and realise its domestic and international potential.

Swansea University is a registered charity. No.1138342. Visit www.swansea.ac.uk