Home / Architecture and Construction / NEST: building of the future is up and running
23.05.2016

NEST: building of the future is up and running 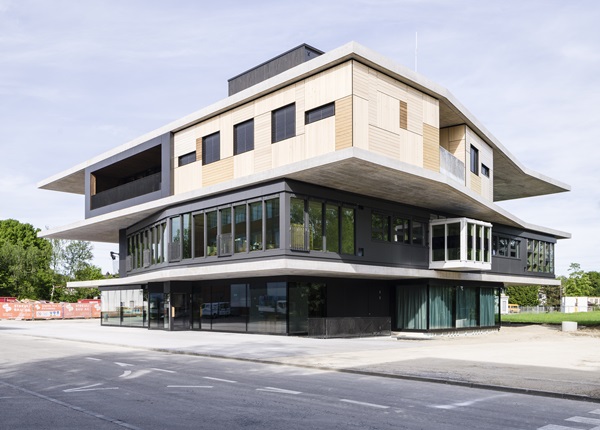 Nest from outside Roman Keller

A residential building, office block and experimental laboratory all rolled into one: NEST is a “living lab” in the truest sense of the word. Those who live in NEST are also test subjects; those who work there are part of the pilot plant.

Almost seven years after the initial ideas for NEST began to take shape, the modular building was finally inaugurated on 23 May 2016. NEST bridges the gap between research and the private sector, between ideas that work in the lab and products that succeed on the market.

The fact that this bridge has been welcomed with open arms on all sides was reflected at the inauguration: around 250 top representatives from industry and research as well as from the public sector joined in the celebrations for this lighthouse project.

In his welcome address, the President of the Swiss Confederation, Johann Schneider-Ammann, was also clearly delighted: “Switzerland’s education, research and innovation sector is strong when it comes to joining forces from both the public and the private sector in order to tackle pressing challenges. NEST has shown this in a paradigmatic way.”

Continuous change is the only constant

Another one of NEST’s strengths is its flexibility. “Thanks to the modular concept, NEST will keep on changing in the years to come and will be able to respond to current issues in the construction and energy sector,” explains Empa CEO Gian-Luca Bona.

Modularity is taken literally at NEST; it comprises a central backbone with three open platforms on the one hand and modules – referred to as research and innovation units – that are installed on these platforms based on a plug-and-play principle on the other. The units are realized by consortiums of research and industrial partners, who transform their ideas into marketable solutions within the scope of these units.

Meet2Create and Vision Wood: two units in the starting blocks

To coincide with the opening of NEST’s backbone, the first two units are also ready and could be visited as part of the celebrations. Meet2Create is an office environment designed by Lucerne University of Applied Sciences and Arts – Engineering & Architecture to gain insights into the working world of the future. Together with their industrial partners, the researchers will be studying topics such as flexible furnishing, customizable climatization at the workstation and passive building technologies in meeting rooms.

The second unit, Vision Wood, is a housing module for students developed by Empa and ETH Zurich. It is centered on innovations that give the trusty construction material timber new functions and thus create new application possibilities. Vision Wood was almost fully prefabricated by industrial partner Renggli AG and, in a spectacular move, slotted in-between the top two NEST platforms by two mobile cranes.

Along with NEST, ehub (short for Energy Hub) is also ready for action. ehub is an energy research platform aimed at optimizing energy management at district level. It intelligently combines all the components in NEST that generate, store, convert or release energy. Moreover, it couples the energy flows from the building sector with the mobility demonstrator “move”, which is also located on the Empa campus and where surplus energy from renewable sources is converted into sustainable fuels for the mobility of the future.

Besides energy, the resource water is also a primary research topic at NEST. The water research institute Eawag is to study water recycling at the Water Hub and develop new concepts to extract nutrients and energy from wastewater. “Water and energy are closely linked. Consuming water automatically consumes energy. Here at NEST, we’re able to work closely with industry to co-develop marketable products,” says Janet Hering, Director of Eawag.

ehub, Water Hub and the units Meet2Create and Vision Wood are just the beginning, though. NEST can accommodate around 15 units, which will each run for between five and seven years before freeing up their space once they have been completed to make way for new projects. At the end of 2016, a solar fitness and wellness facility is ready to be opened on the uppermost platform – a unit with major backing from the Swiss-Liechtenstein Association of Technical Building Services Contractors (suissetec).

Five other units are scheduled for the next two years: in HiLo, a spectacular two-story residential and office environment, ETH Zurich will be studying adaptive façades and new lightweight building possibilities; the Werner Sobek Group will be teaming up with the University of Stuttgart and ETH Zurich in a unit on the topic of urban mining; EPFL will focus on multifunctional, active façades in the unit SolAce; and St. Gallen University of Applied Sciences is looking to tackle the topic of active assisted living at NEST – i.e. housing for people in their autumn years.

The fifth unit, called Digital Fabrication, is being initiated by ETH Zurich’s national research focus area (RFA) of the same name. The researchers will be studying robotic prefabrication and on-site production as well as digital construction processes.

The network is growing

NEST is a unique cooperation between research, industry and the public sector. At least 90 partners have been supporting NEST thus far – and the platform is open to new partners. At NEST, companies accelerate their own innovation process and scientists conduct research in real time. And NEST also enables politics, authorities – and investors – to gain an idea of the future configuration of the building, energy and real estate sectors. The platform’s partners are part of a broad network, which creates mutual added value and builds the future together.