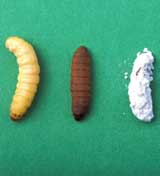 Pellets of rotting moths could keep weevils off oranges.

Mummified rotting cadavers could be a cost-effective way to combat soil pests, suggest scientists at the US Department of Agriculture. Citrus crops, cranberries and ornamental shrubs all stand to benefit.

Bacteria in the guts of roundworms grown inside dead wax moths can emerge to kill other soil insects, including the black vine weevil (Otiorhynchus sulcatus), a serious pest of plants in nurseries.

The USDA’s Southeastern Fruit and Tree Nut Research Laboratory in Byron, Georgia, is coating dead moths in clay and starch to turn them into slow-release anti-pest pellets. One of these biological time bombs could keep a potted plant pest-free for months.

Citrus farmers currently spray their fields with water containing roundworms, properly called nematodes. These worms are either grown in moth cadavers and captured in a water bath or raised in artificial media.

“Worms fresh out of a cadaver are 10 times more infective than those developed in artificial media,” says David Shapiro-Ilan, a member of the USDA team. A chemical in the cadaver is believed to increase their infectivity.

Previous trials of ’dead body delivery’ floundered because of the corpses’ lack of structural integrity. Like most rotting things, they fell apart before reaching the greenhouse or field.

The new clay casing keeps the bloated cadavers together until soil water dissolves it. Then tens of thousands of nematodes slowly crawl out. When the worms (Heterorhabditis bacteriophora) enter soil pests through the mouth or anus, their resident bacteria (Photorhabdus luminescens) emerge and produce insecticidal proteins.

Farmers and nurserymen will probably need to lay down pellets quite frequently as the distribution of nematodes is patchy, and they can disappear within weeks.

Field trials are underway, and have already captured the interest of industry. The researchers have signed an agreement with H&T Alternative Controls in Perry, Georgia, to produce the nematodes and infected cadavers.

Nematodes aren’t often thought of as soil’s good guys. Some are themselves pests, infecting the roots of many commercial crops. Most are benign but important parts of the soil’s food web. Roughly 30 of the 25,000 known species are heralded for the insecticidal abilities of their associated bacteria.