Home / Agricultural and Forestry Science / Potential and challenges in agriculture and rural areas of Eastern Europe in times of urbanisation
26.01.2016 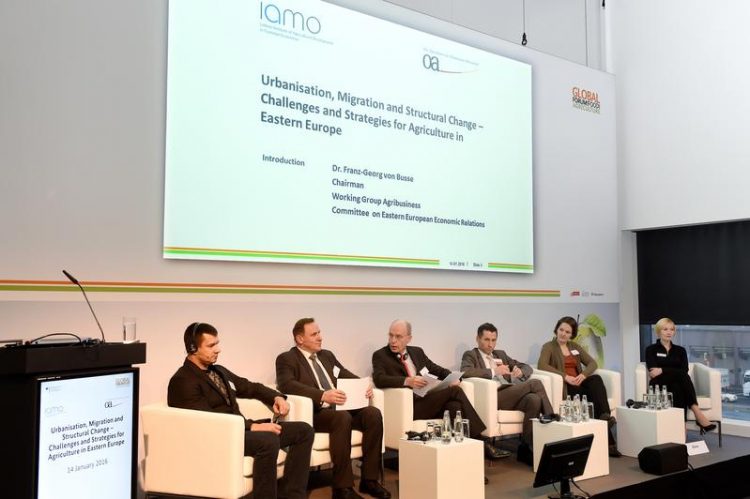 Entitled “Urbanisation, Migration and Structural Change – Challenges and Strategies for Agriculture in Eastern Europe”, IAMO in partnership with the German Agribusiness Alliance of the Committee on Eastern European Economic Relations (OA) hosted a panel of experts at the Global Forum for Food and Agriculture (GFFA) on 14 January 2016.

Representatives from the economy, civil society and science along with around 130 guests at the event were discussing upcoming challenges for food supply towards growing Eastern European cities that are facing migration from rural regions. The GFFA is an international conference on agricultural policy matters affecting food security. It is held annually as part of International Green Week in Berlin under the auspices of the German Federal Ministry of Food and Agriculture (BMEL).

Prof. Dr. Thomas Glauben, Director of the Leibniz Institute for Agricultural Development in Transformation Economies (IAMO), opened this year’s GFFA expert panel with a look at the great heterogeneity between booming metropolises and rural regions in Russia. Wealth in terms of economic power, access to markets, employment and income opportunities as well as social infrastructures is concentrated in just a few of over 80 regions in the country.

Urban centres are exerting a great pull on the population, which is increasingly causing emigration of young people in particular from regions with a rural character. Underdeveloped regions can easily fall victim to a vicious circle. They become even less attractive and continue losing qualified workers. This development not only affects individual regions of Russia but impedes the overall growth of strategically important sectors of the economy – including food production – while demand for high-quality and healthy food in the cities continues to increase.

Dr. Robert Kloos, State Secretary at the Federal Ministry of Food and Agriculture (BMEL), opened his speech stating that “modern agriculture forms the basis of life in the city”. He drew attention to the fact that only one out of four Russians lives in the countryside today. While rural depopulation could be prevented through government measures during Soviet times, the increasing migration of well-trained skilled workers poses huge challenges for agriculture today. Extending value chains by establishing local processing operations seems a possible solution to create new prospects for rural regions. However, Kloos was critical of protectionist tendencies in Russia: “Separation cannot be sustained over the long term. Then one will see whether the structures are competitive.”

In the subsequent round of discussions, moderator Dr. Franz-Georg von Busse, Chairman of the German Agribusiness Alliance, Committee on Eastern European Economic Relations (OA), spoke with podium guests about the potential and the challenges faced by agriculture and rural areas in times of urbanisation with a focus on Russia. Dr. Raimund Jehle, Senior Field Program Officer, FAO Regional Office for Europe and Central Asia, examined the phenomenon of rural depopulation.

Migration from rural areas to the cities but also to other countries is mainly driven by people’s desire for better living conditions. This tendency is more pronounced in states with large agricultural operations than in regions with small farms. To counteract rural depopulation, Jehle recommends improving the conditions for agriculture workers through operational structures and the influence of agricultural associations.

Dr. Oleksandr Perekhozhuk, IAMO research associate, confirmed in his statement that there is a shortage of qualified workers in many of Russia’s rural regions. Young people who leave the country for the city to get an education or pursue a course of studies rarely return to their home region after obtaining their qualifications. Another problem is that some of the large operations in the country are legally registered in large cities. This means that tax revenues do not benefit the rural communities for the payment of wages, infrastructure development and social institutions. Perekhozhuk proposes the decentralisation of agricultural structures by boosting support for midsize operations in particular and collecting taxes directly where companies are located.

A practical perspective was presented by Aleksey Kiryanov, the owner of the Russian food company “IP Kiryanov”. The producer of tinned meat reported that demand for qualified workers in the Belgorod region is high. Local agricultural holdings in particular are having a difficult time finding enough skilled workers for their operations even though good salaries are offered. Kiryanov considers the support of the Russian government for local agricultural operations positive for the growth of the Belgorod region.

Kerstin Müller, Program Manager for Russia at APOLLO e.V., acts as an agent for internship positions in German agriculture for Russian workers. In the course of the podium discussion, she emphasised that the availability of skilled workers in the Russian agricultural sector differs widely between regions. What is more, job seekers in agriculture are often not willing to leave their familiar surroundings and therefore tend to change their occupation instead.

Ivonne Bollow, Head of Eastern Europe and International Affairs in the Metro Group, discussed the importance of local products for the corporate chain’s nearly 90 major markets in Russia. The sale of local goods has great advantages on the one hand, such as low transportation, warehousing and customs costs as well as potential product diversity and fast response to consumer demand. On the other hand it is often difficult for small, local producers to assert themselves against the quasi-monopolistic national companies in respect to pricing, marketing and dealer relationships.

“Supplying an increasingly urbanised country and the world markets with high-quality, healthy food requires a modern, productive agricultural and nutrition sector as well as competitive food chains. Good prospects for companies and income opportunities for qualified, skilled workers combined with functioning transportation and marketing infrastructures are prerequisites. Vibrant rural areas have to be established, supporting not only the production of raw materials but also food processing and trading,” explains IAMO Director Prof. Dr. Thomas Glauben.

The Leibniz Institute of Agricultural Development in Transition Economies (IAMO) analyzes economic, social and political processes of change in the agricultural and food sector, and in rural areas. The geographic focus covers the enlarging EU, transition regions of Central, Eastern and South Eastern Europe, as well as Central and Eastern Asia. IAMO works to enhance the understanding of institutional, structural and technological changes. Moreover, IAMO studies the resulting impacts on the agricultural and food sector as well as the living conditions of rural populations. The outcomes of our work are used to derive and analyze strategies and options for enterprises, agricultural markets and politics. Since its founding in 1994, IAMO has been part of the Leibniz Association, a German community of independent research institutes.

The Committee on Eastern European Economic Relations (OA) is a joint organization of the leading associations representing German business and acts as a central point of contact for German companies with interests in Russia, Belarus, Ukraine, Central Asia, South Caucasus and South-eastern Europe. The OA supports economic policy developments in bilateral relations with those countries and promotes trade, investments and service transfers by German companies in this region. Arbeitsgruppe Agrarwirtschaft, or the German Agribusiness Alliance, unites leading associations and companies in the German agriculture and food sector focussing in particular on agricultural machinery and equipment, animal husbandry, plant breeding and plant protection as well as agricultural trade. Its objective is to actively support the development of the agriculture and industries in partner countries by providing knowhow, modern technology as well as by promoting economic relations and direct investment. The German Agribusiness Alliance operates its Eastern Europe office in co-operation with the Committee on Eastern European Economic Relations.