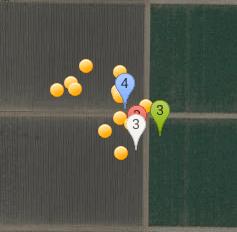 Although there has been other research on precision agriculture in recent years, this study specifically addresses crops, which are currently picked by hand. Credit: University of Illinois Department of Industrial and Enterprise Systems Engineering

Sowers, along with students Nitin Srivastava and Peter Maneykowski have developed an algorithm which will help streamline the workforce of highly perishable hand-picked crops. Their paper, Algorithmic Geolocation of Harvest in Hand-Picked Agriculture, which will appear in Natural Resource Modeling, presents the results of a study conducted at the harvest of strawberry patches at Crisalida Farms in Oxnard, Calif.

Less than a year ago, Sowers co-authored a paper titled, Hand-picked specialty crops 'ripe' for precision agriculture techniques, addressing the timing and transport of such crops.

“The strawberries that you put on your ice cream or cereal are for the moment picked by a crew of 10 or so workers, who mostly earn a wage per box collected,” Sowers noted. “For the consumer, it important that the strawberries are of good quality and look nice.”

According to Sowers, the strawberries that appear in clam shells that you find at the market or at your local grocery store are largely in the same condition as they were when they were picked from the field. They are loaded in a box, then a bigger box, then on a pallet and finally onto a truck. The process is then reversed at the market.

“One of the aspects that I'm interested in is the fact that there are humans involved in picking,” Sowers said. “Just like Internet browsing history differs from person to person, along similar lines, a workers' ability to harvest strawberries is different. This brings up the question: how do you think about data in that industry? Because the human variability has a huge effect.

“Figuring out what is going on in the field is an important question,” he added. “Identifying that certain parts of the field are producing a higher or lower quality harvest can be valuable in harvest strategy.”

Rather than requiring a worker to enter data during harvest, which would slow down the process, Sowers' team was able to pinpoint exact movement of each worker through GPS tracking on a smart phone each carried with them. Based on that data, the team developed an algorithm to predict the amount of completed boxes.

The data promises to ultimately lead to more precision techniques for harvesting. For instance, one set of quality control typically occurs at the edge of field and oftentimes there is a backlog of workers waiting in the que. More data will better help plan for best times to provide this control as well as schedule forklifts to pick up pallets and put them in a cooler. Time is of the essence as hot weather can have a dramatic effect to the quality of the produce.

“At the moment, we're just trying to track,” Sowers noted. “You can't manage what you can't measure. We're trying to measure what is going on in the field actually in the field, not at the edge of the field where data is currently being collected. If you know moment by moment how much is being harvested, you can better schedule, rearrange harvest crews or re-task.”

Sowers further iterates the importance of this measurement to the industry because miscalculation of the workforce could completely eliminate profit.

“If that happens, all the nutrients that went into it (water, fertilizers, nitrogen, etc.) is just wasted,” he said. “If you can better allocate resources and prevent or lessen the time that some of those stacks of berries are sitting in the field, that's a win.”

The team successfully proved that these behaviors can be tracked and analyzed and is planning to return to California to refine it.

“There is a more and more appreciation for data in this industry,” Sowers said. “I'd like to go back and do this on a larger scale so that we can try to compare this to something which is at a production grade. In order to actually have an impact, we need to understand and process the data at a level of certainty which is as good as or comparable to what is needed to actually make some decisions for re-allocating people and for optimizing the layout of fields.” 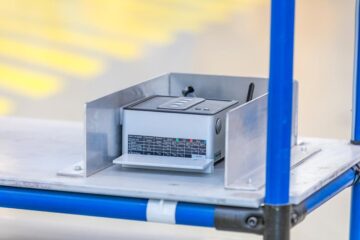 Digitalization in industrial manufacturing Automated assembly operations are a key to success. They enable stable manufacturing, high precision manufacturing and greater responsiveness to market demands. The Fraunhofer Institute for Factory…