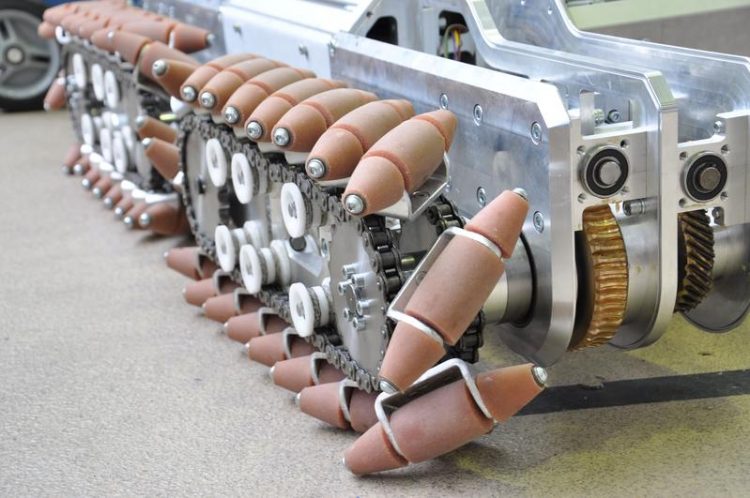 One of the special features of the vehicle is its innovative traction concept. Here the use of the working principle of Mecanum wheels has been transferred here into a tracked vehicle. Photo: Sabine Nollmann

A place on the podium of the “DHL Robotics Challenge 2016” is now safe for the student team from three faculties of the University of Bremen, Germany, as they were selected as one of the finalists in the world-acclaimed robotics competition.

Their “Last Mile Assistant Robot” (LaMA) convinced the selecting jury. On the 17th November, the team will present its vehicle, which is intended to facilitate the work of the parcel delivery staff, to 180 selected experts at the DHL Innovation Center in Troisdorf near Bonn, Germany. The robot was developed within several student projects at the BIBA – Bremer Institut für Produktion und Logistic at the University of Bremen by 7 students from 6 nations from 4 continents.

For the “Robotics Challenge 2016”, a “Prototype of a Self-driving Delivery Cart”, a demonstrator of a self-propelled small transport vehicle should be developed. On the so-called “last mile”, as the delivery to the end customer is called, the vehicle should follow and assist the couriers by autonomously carrying their heavy loads. The vehicle must therefore be able to travel in typical urban and rural environments loaded with packages at walking pace. It should be simple to control, robust and weatherproof.

“Our vehicle fulfills already these requirements, yet there is still a lot to be done before the presentation,” says Nils Hoppe, responsible for the mechanics in the “LaMA” team. He studied production engineering and will complete his master's degree next year. For months, Hoppe and his fellow students have been working on the project.

For their application in the innovation competition, the students had to submit a description of the system and its functionalities as well as a video summarizing the development. The film was created by the team member and mathematics student Simon Stock. The two and a half minute video can be found under the following link: www.youtube.com/watch?v=v6V4kztcS-0. The battery-operated tracked vehicle can be simply steered via hand and arm gestures. For example, it moves forward or sideways as required, follows the delivery person, and it can raise the loading area so that the courier can easily remove the parcels without bending.

One of the special features of the vehicle is its innovative traction concept, which ensures extraordinary flexibility and maneuverability. This is possible through the use of the working principle of Mecanum wheels, which has been transferred here into a tracked vehicle. Supported by the Bremen Patent and Exploitation Agency InnoWi, a European patent was already filed for the invention. The original idea for this traction technology comes from Dipl.-Ing. & Pat.-Ing. Claudio Uriarte, who has already dealt with this topic in several research projects. The BIBA scientist is one of the three supervisors of the “LaMA” project.

“Mecanum wheels work differently than the wheels of a car. The rollers, which are mounted obliquely on the wheel surface, transfer forces in a 45 degress offset to the wheel axle, in contrast as the 90 degrees in cars. A change in the travelling direction of travel is not performed by the steering of the wheels, but in this case by an adjustment of the rotational speed of the respective wheels”, explains Uriarte. “They create thus a so-called 'omnidirectional' drive. This means that the vehicle can move in all directions and can change its direction on the spot”. This principle transferred to a tracked vehicle as in the case of “LaMA “, provides the unmet maneuverability as well as maximum mobility and stability even in rough and uneven terrains.

“This was a very complex task and I am impressed by how the students have mastered it – very rich in ideas and professionalism. I particularly like the compact design of the robot”, says Uriarte. BIBA director Prof. Dr.-Ing. Michael Freitag is pleased with the success of the students. “They really did an excellent job. With a great deal of commitment, they have created a functioning system in a relatively short time, which convinced professionals in the industry.”

For Freitag, the results of the student project also confirm the teaching of the production engineering department of the University of Bremen, in which the BIBA is strongly involved. “It is one thing to impart methodological knowledge. A whole other thing is to convey practical experience and to motivate the students to develop their own initiative and creative work like this one, despite bone-dry theory and school-like studies”, says Freitag. “We must not forget that the academic teaching must always be application-oriented and should offer a certain fun factor if it wants to be successful.”

The three finalists of the robotics competition will have the opportunity to present their developments at the “DHL Innovation Day” in front of professionals from around the world. In a live voting, the ranks are awarded – and thus prize money between 2,000 and 10,000 euros. In addition, the first-placed team will present his idea in the “DHL Innovation Centers” in Troisdorf and Singapore and will be invited to examine the implementation of the idea together with DHL within the framework of a feasibility study.