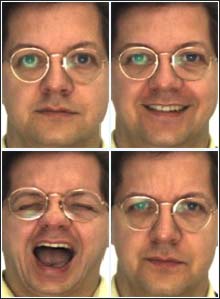 That new finding, part of an engineer’s quest to design computers that “see” faces the way humans do, provides more evidence concerning a controversy in cognitive psychology.

Martinez developed a model of how the brain recognizes the faces of people we’ve seen before, and how we discern facial expressions. These two activities take place in different areas of the brain, and some scientists believe that the mental processes involved are completely separate as well; others believe that the two processes are closely linked.

In a recent issue of the journal Vision Research, Martinez reported that the two processes are indeed linked — indirectly, through the part of the brain that helps us understand motion. We use our knowledge of how facial muscles move when we recognize a smile, for instance, or when we recognize a familiar face regardless of what kind of facial expression he or she has.

Martinez and his colleagues want to use this information to design a computer that recognizes people based on input from a video camera. Most such “computer vision” systems on the market today require many pictures of a person before they can make an identification, and even then the computers can be fooled if the person looks slightly different than in the pictures.

“Ideally, we want a computer that can recognize someone, even though there is only one picture of that person on file, and it was taken at a different angle, in different lighting, or they were wearing sunglasses,” Martinez said.

It’s a tall order, but then again, the goal isn’t 100 percent accuracy.

“When it comes to recognizing faces, people aren’t perfect, but computers are even worse,” said Martinez. “For a computer to interact well with humans and identify people the way we want it to, it would have to make the same errors that humans make.”

Martinez has shown that his model of this brain function — that we use our knowledge of motion and shape combine together to recognize faces and facial expressions — closely matches the test results of people he studied while he was at Purdue University.

Martinez photographed the faces of 126 volunteers to create a face database. Each volunteer was photographed with four different facial expressions — happy, angry, screaming, and neutral — with different lighting, and with and without different accessories including sunglasses.

For the work just published in Vision Research, Martinez showed photos from the database to two groups of volunteers. The first group was tested to see how fast they could decide if two faces — one with a neutral expression and one happy, angry, or screaming — belonged to the same person.

The second group of volunteers was tested to see how fast they could identify the facial expression — either happy, angry, screaming, or neutral — shown in a series of photos.

Martinez timed their responses, and compared the results to his computer model. Though the model depicted a much-simplified version of human visual processing, it was unique because it included a module for calculating how much the facial muscles had moved between the different expressions.

If the human brain takes the time to “calculate” movement of the face, he reasoned, then the humans and the computer model would experience similar delays when identifying faces.

In the second group — the one that had to identify which of the four expressions they were looking at — they most quickly picked out happy faces (1.3 seconds), then neutral (1.5 seconds), angry (1.9 seconds), and screaming faces (barely under 2 seconds).

Although the computer model’s “reaction time” was measured in computer cycles and iterations rather than seconds, it identified faces and expressions in the same order as the human volunteers for both tests.

Except for very subtle features — such as a furrowed brow, pursed lips, or squinting eyes — most angry faces aren’t that different from neutral faces. So matching a neutral face to an angry face is easier.

But when the only task is to identify an expression, identifying happiness is easier because in general we need only examine whether one feature — the mouth — is smiling.

Ultimately, this work could lead to computers that recognize the faces of authorized users — eliminating the need for passwords, which sometimes be guessed or obtained by unauthorized users. Computers could also take cues from a user’s emotional state.

“You can imagine a computer saying, ‘you seem upset, what can I do to help?’” Martinez said.

It could improve age-progression software, which is often used by law enforcement to find missing children. Computers would also be able to identify criminals who wear common disguises such as glasses or scarves.

This work was partially supported by the National Science Foundation.