Home / Studies and Analyses / Interactions within larger social groups can cause tipping points in contagion flow
22.10.2020 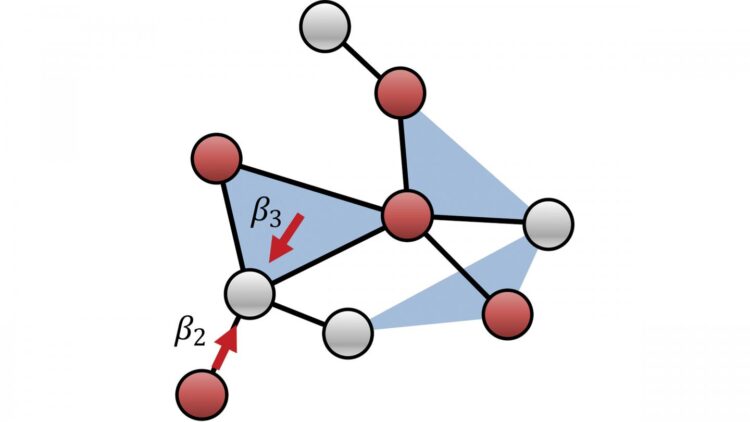 The distribution of group interactions in a social network affects the critical point at which explosive jumps in opinion, popularity, or disease spread occur.

Contagion processes, such as opinion formation or disease spread, can reach a tipping point, where the contagion either rapidly spreads or dies out. When modeling these processes, it is difficult to capture this complex transition, making the conditions that affect the tipping point a challenge to uncover.

In the journal Chaos, from AIP Publishing, Nicholas Landry and Juan G. Restrepo, from the University of Colorado Boulder, studied the parameters of these transitions by including three-person group interactions in a contagion model called the susceptible-infected-susceptible model.

In this model, an infected person who recovers from an infection can be reinfected. It is often used to understand the propagation of things like the flu but does not typically consider interactions between more than two people.

“With a traditional network SIS model, when you increase the infectivity of an idea or a disease, you don’t see the explosive transitions that you often see in the real world,” Landry said. “Including group interactions in addition to individual interactions has a profound effect on the system or population dynamics” and can lead to tipping point behavior.

Once the rate of infection or information transfer between individuals passes a critical point, the fraction of infected people explosively jumps to an epidemic for high enough group infectivity. More surprisingly, if the rate of infection decreases after this jump, the infected fraction does not immediately decrease. It remains an epidemic past that same critical point before moving back down to a healthy equilibrium.

This results in a loop region in which there may or may not be high levels of infection, depending on how many people are infected initially. How these group interactions are distributed affects the critical point at which an explosive transition occurs.

The authors also studied how variability in the group connections — for example, whether people with more friends also participate in more group interactions — changes the likelihood of tipping point behavior. They explain the emergence of this explosive behavior as the interplay between individual interactions and group interactions. Depending on which mechanism dominates, the system may exhibit an explosive transition.

Additional parameters can be added to the model to tune it for different processes and better understand how much of an individual’s social network must be infected for a virus or information to spread.

The work is currently theoretical, but the researchers have plans to apply the model to actual data from physical networks and consider other structural characteristics that real-world networks exhibit.

Chaos is devoted to increasing the understanding of nonlinear phenomena in all areas of science and engineering and describing their manifestations in a manner comprehensible to researchers from a broad spectrum of disciplines. See https://aip.scitation.org/journal/cha.

Elucidating how the production of antibodies is regulated, one cell at a time

The Power of Art