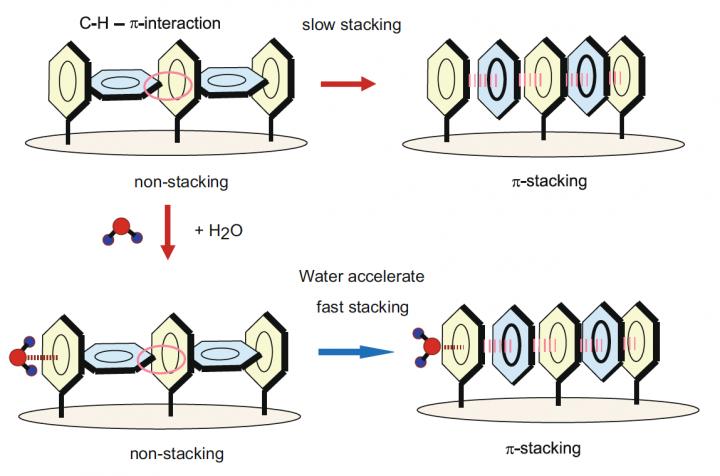 When light is applied to the T-shaped benzene cluster in their computer simulation, they reorganized themselves into a single stack, changing its electrical conductivity. The addition of a molecule of water made the stacking occur significantly faster. Credit: Tachikawa H., et al. Scientific Reports, Feb. 20, 2019 Usage Restrictions: This image is copyrighted and can be used for reporting this press release if appropriately credited.

Hokkaido University researchers have developed a computational method that can predict how clusters of molecules behave and interact over time, providing critical insight for future electronics. Their findings, published in the journal Scientific Reports, could lead to the creation of a new field of science called cluster molecular electronics.

Now, Hiroto Tachikawa and colleagues at Hokkaido University in Japan have developed a computational approach that can predict how clusters of molecules behave over time, which could help launch a new field of study for cluster molecule electronics. Their approach combines two methods traditionally used for quantum chemical and molecular dynamic calculations.

They used their method to predict the changes in a computer-simulated cluster of benzene molecules over time. When light is applied to the T-shaped benzene clusters, they reorganize themselves into a single stack; an interaction known as pi-stacking.

This modification from one shape to another changes the cluster's electrical conductivity, making it act like an on-off switch. The team then simulated the addition of a molecule of water to the cluster and found that pi-stacking happened significantly faster. This pi-stacking is also reversible, which would allow switching back and forth between the on and off modes.

In contrast, previous studies had shown that the addition of a molecule of water to a single molecule electronic device impedes its performance.

“Our findings could usher in a new field of study that investigates the electronic performance of different numbers, types and combinations of molecular clusters, potentially leading to the development of cluster molecule electronic devices,” Tachikawa commented.