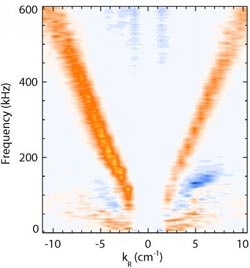 Research on the Alcator C-Mod experiment at MIT has made an unexpected connection between two seemingly unrelated but important phenomena observed in tokamak plasmas: spontaneous plasma rotation and the global energy confinement of the plasma.

Self-generated flows, the spontaneous plasma rotation which arises even when there is no external momentum input, can have a strong beneficial effect on plasma transport and stability. But in a fusion reactor, unlike most current experiments, there will be little or no external rotation drive—thus it is crucial to understand and be able to predict plasma rotation under these conditions. In the discharges studied at Alcator C-Mod, the flows can reverse direction at a very precise transition point, depending on plasma density and current.

These observations reveal the fundamental connection between the two phenomena and how they both depend on the nature of the underlying plasma turbulence. One hypothesis is that at low density, the turbulence is driven by trapped electron modes, which strongly degrade the confinement and which propagate in a particular direction. As the density is raised, these modes are suppressed, and turbulence driven by ion temperature gradients dominates. These modes at higher density regulate the confinement and propagate in the opposite direction. Evidence for this explanation is emerging from careful measurements of plasma fluctuations.