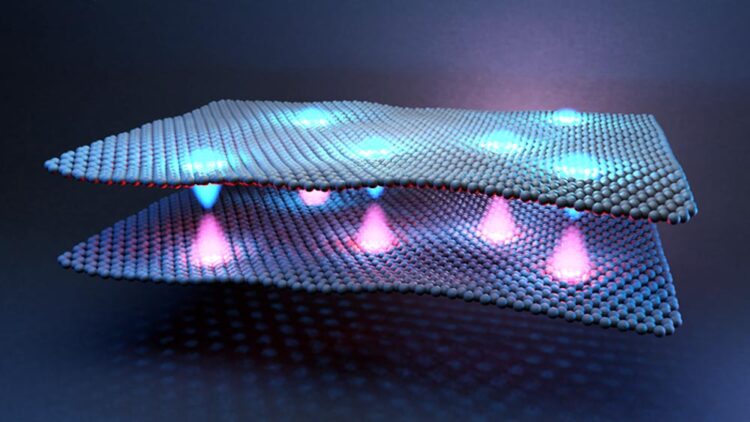 A tunable platform made from atomically thin materials may help researchers figure out how to create a robust quantum condensate that can flow without losing energy.

Electrons flowing through power lines and computers inevitably encounter resistance; when they do, they lose some of their energy, which dissipates as heat. That’s why laptops get hot after being used for too long and why the server farms that power the cloud require so much air conditioning to keep the machines from overheating. Likewise, any particles carrying energy tend to lose that energy when they flow in a typical environment. There are a few exceptions, which usually occur at very low temperatures when particles form pairs called quantum condensates. This leads to superconductivity, with vanishing electrical resistance, in some metals such as aluminum, and superfluidity in liquified helium, which can then flow without dissipation.

Many applications, from dissipationless power transmission to quantum computation, have been developed based on superconducting materials showing these quantum condensate states. But, known superconducting materials need to be kept cold—often impractically so. To raise the temperature of energy-loss-free devices, researchers need to better understand what drives the formation of quantum condensates in the first place.

In theory, superconductivity is the result of paired electrons. In most materials however that pairing is weak—two negatively charged particles don’t normally want to pair with each other—and the pairing strength is fixed. In a new article in Science, Cory Dean and James Hone at Columbia, Xiaomeng Liu, Philip Kim, and Bert Halperin at Harvard,  Jia Li at Brown, and Kenji Watanabe and Takashi Taniguchi at NIMS in Japan describe a tunable, graphene-based platform that uses opposite charges—electrons and holes—to form quantum particle pairs under strong magnetic fields. The strength of that pairing can now be varied along a continuum, which will allow the team to test theoretical predictions about the origins of quantum condensates and how they might increase the temperature limits of superconductivity.

The underlying theory is simple enough. “If you can get electrons to pair, they can superconduct,” said Dean. According to the Bardeen-Cooper-Schrieffer (BCS) theory, an attractive force between electrons—no matter how weak—will cause those electrons to pair up and form a new kind of particle called a  “Cooper pair.”  These behave like particles called bosons and, at low enough temperatures, can enter into a collective state and move through a material unimpeded by disorder—a feature any single electron just cannot achieve on its own.

But there’s been a problem.  “Electrons do not want to pair,” said Dean.  Like repels like, as the saying goes. Rather than trying to force a bond between two negatively charged electrons, the team has been exploring how opposites can attract to yield an equivalent ‘paired’ boson.

The general idea, which was first proposed by theoretical physicists, is now being realized by the team in atom-thin sheets of graphene, a material with unique properties that they have been working to leverage for several years. Depending on the voltages and magnetic fields applied, graphene sheets can be made that are populated with either negatively charged electrons or with positively charged holes. When two such sheets are put together, electrons on one sheet will want to pair with oppositely charged holes on the other, forming the bosonic pair.

Some distance is still needed. “People first tried to pair up electrons and holes in a single material and yes there is attraction between them, but in a sense the attraction is too strong,” said Liu, the lead author of the paper. If the two get too close, they’ll combine and disappear.  Using a technique developed at Columbia to create layered stacks of different atom-thin materials, the team added layers of insulating boron nitride between the graphene in their platform. This created physical distance between electrons on one graphene sheet and holes on another, which also influenced the strength of the interaction: more insulating layers yielded a weaker bond; fewer layers, a stronger one. “By varying the thickness of that separation layer, we have direct, tunable control over the interaction strength,” said Li, another lead author of this work.

Electrons and holes don’t just need to interact with each other; the bosonic pairs they form also need to interact with other pairs to reach a collective quantum condensate state. By tweaking the number of insulating layers, the team could control the binding strength between the electrons and holes, while changing the external magnetic field adjusted the interaction between bosonic pairs.

Crossing Over to Raise the Temperature

One theory is that high temperature superconductors result from electron pairing that is neither “weak” nor “strong,” but exists at the crossover between these two extremes. Studying strong bosonic pairing—described by the Bose-Einstein Condensate (BEC) Theory—has been a challenge in high temperature superconductors, since electrons naturally repel one another, and controlling their interaction is difficult. With their tunable graphene platform that combines electrons with holes rather than electron-electron pairs, the team can now map for the first time how conductivity changes as pairing strength is shifted between the BEC and BCS extremes.

Here, the experiments took place at liquid-Helium temperatures—negative 450 degrees Fahrenheit—and under a strong, 10 Tesla magnet (about 100 times stronger than a typical fridge magnet); neither condition is practical to build real devices that might operate on a chip inside a computer. But, said Dean, the work opens up new avenues of investigation. “Because of the tunability of this platform, we can test theoretical predictions in ways that have not previously been accessible,” he said.

With different materials, it may also be possible to lose the magnet, which is needed to get graphene’s normally non-interactive electrons moving. For example, semiconductors can be manipulated to be full of electrons and/or full of holes. Getting such sheets to form stable electron-hole pairs will come down to technicalities, like how ‘clean’ and defect-free the materials are and whether you can make appropriate contact between them. “If such electron-hole pair condensates—also called exciton condensates—can be stabilized at high temperatures and without a magnetic field, this might lead to practical uses,” said Halperin, a physicist from Harvard.

“What we’re establishing with this graphene platform is that the underlying concept is absolutely sound,” said Dean. “It’s no longer fantasy; it’s reality. Now it becomes, in a sense, an engineering challenge.”