Towards an 'orrery' for quantum gauge theory 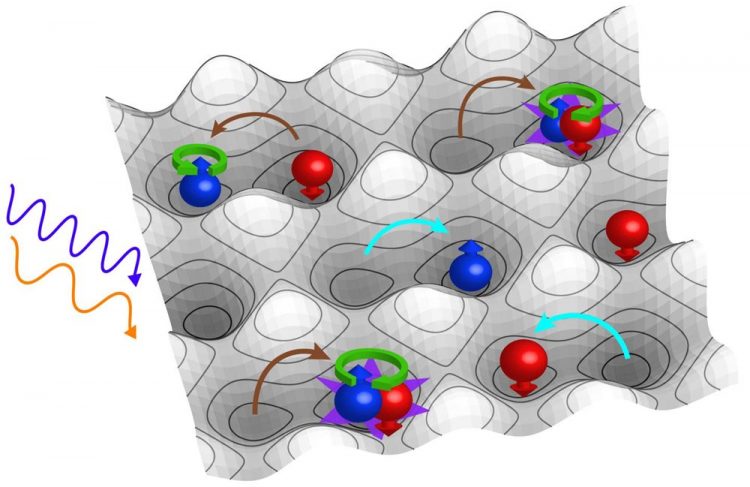 The lattice potential consists of individual dimers. The lattice position is sinusoidally modulated in one direction at two frequencies (purple and orange arrows). Depending in the occupancy in the lattice, atoms can pick up a phase (green arrows) in a density-assisted tunnelling process (brown arrow), compared to a single-particle hopping process (blue arrow). Credit: Figure adapted from Görg et al., doi: 10.1038/s41567-019-0615-4, Nat. Phys. (2019).

The interaction between fields and matter is a recurring theme throughout physics. Classical cases such as the trajectories of one celestial body moving in the gravitational field of others or the motion of an electron in a magnetic field are extremely well understood, and predictions can be made with astonishing accuracy.

However, when the quantum character of the particles and fields involved has to be factored in explicitly, then the situation quickly becomes rather complex. And if, in addition, the field depends on the state of the particles evolving in it, then calculations can shift out of reach even for today's most powerful computers.

The limitations in exploring regimes of dynamical interaction between fields and matter hinder progress in areas ranging from condensed-matter to high-energy physics. But there is an alternative approach: instead of calculating the dynamics, simulate it.

Famously, for planetary systems mechanical models known as orreries have been built long before digital computers were developed. In the quantum realm, in recent years so-called 'quantum simulators' have been developed, where the unknown dynamics of one quantum system is emulated using another, more controllable one.

As they report today in the journal Nature Physics, Frederik Görg and colleagues in the group of Tilman Esslinger in the Department of Physics of ETH Zurich have now made substantial progress towards quantum simulators that might be employed to tackle general classes of problems where the dynamics of matter and fields are coupled.

Görg et al. looked not directly at gravitational or electromagnetic fields, but at so-called gauge fields. These are auxiliary fields that are typically not directly observable in experiments, but all the more powerful as a consistent framework for the mathematical treatment of the interactions between particles and fields.

As a central concept in physics, gauge fields offer a unique route to understanding forces — the electromagnetic force as well as those holding together subatomic particles. Consequently, there is substantial interest in quantum simulations of gauge fields, in the hope that they provide fresh insight into situations that currently cannot be explored in calculations or computer simulations.

One of the currently leading platforms for simulating complex quantum systems is based on atoms that are cooled to temperatures close to absolute zero and trapped in lattice structures created by laser light.

A major advance in recent years has been the realization that the atoms can be used to mimic the behaviour of electrons in a magnetic field, even if the atoms have no electric charge.

The key to achieve this is the use of external control parameters to steer the quantum-tunnelling process by which the atoms move between adjacent sites of the optical lattice. Through suitably tailoring the complex phase that the quantum particles pick up in a tunnelling event — known as the 'Peierls phase' — the neutral atoms can be made to behave precisely like charged particles moving in a magnetic field.

The engineered dynamics in these synthetic gauge fields can be compared to that of classical orreries, where the model planets move as if they were subjected to a substantial gravitational pull from a central body, emulating the behaviour of real planets.

Shaking up the field

The Esslinger group, and others, have used the ultracold-atom platform before to create artificial gauge fields resulting from complex tunnelling phases. But so far, these engineered fields were intrinsically classical, and did not include backaction from the atoms to the gauge field. Hence the excitement as Görg and his co-workers now present a flexible way to achieve coupling between atoms and gauge fields.

They propose — and implemented — a procedure to render the Peierls phase dependent on how the atoms are distributed in the lattice. When the distribution changes as a consequence of the interaction with the gauge field, the gauge field itself is altered.

This is as if the orrery would speed up or slow down depending on the planetary constellation (which is not needed to model simple celestial mechanics, as the interaction between planets is neglected). In the case of a quantum simulator for quantum gauge fields, however, the interaction between the particles is an essential ingredient.

In the experiments now reported, the ETH physicists created an optical lattice that consists of 'dimers', each made from two neighbouring sites in which fermionic atoms can reside either individually or in pairs (see the figure). The tunnelling between the sites of the dimer is controlled by shaking the lattice at two different frequencies with a piezoelectric actuator.

The frequencies and phases of the modulation are chosen such that the Peierls phase between sites depends on whether an atom shares its dimer site with another atom of the opposite spin or not (see the animation).

The step to engineering gauge fields that are coupled to ultracold matter is an important one. Ultracold atoms in optical lattices are already established as a versatile platform for quantum simulations, including emulating complex electronic phenomena occurring in solid-state materials.

The current work of Görg et al., together with related recent advances by other groups, promises that in the not-too-distant future also more complex quantum gauge fields can be tackled, in particular those that appear in high-energy physics and challenge current classical simulation approaches.

A distinct strength of the approach by Görg et al. is that it can be used for engineering a variety of different quantized gauge fields, beyond the specific scenario they explored experimentally in the just-published paper, as they show based on theoretical considerations.

And as the work also demonstrates exquisite experimental control over a highly tunable atomic many-body system, there is now the clear and intriguing prospect of a modern-day orrery that provides insight not into movements on the sky, but deep into the quantum world.