This discovery made ITER possible 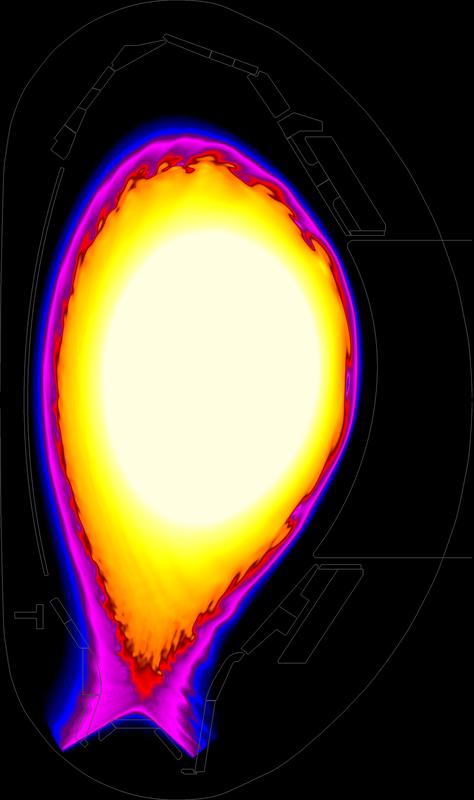 Forty years ago, physicists at the Max Planck Institute for Plasma Physics found a new plasma state that could be particularly suitable for energy production: the H-mode. On 8 November 1982, the corresponding paper was published, giving fusion research a worldwide boost. To this day, the investigation of the H-mode is one of their most important fields of work.

The breakthrough came on a Thursday when – as often before – plasmas with neutral beam heating were to be studied at high temperatures. These plasmas were of a stubborn uniformity. “But in the middle of the series, the important plasma parameters suddenly changed. All the scientists in the ASDEX control room realised that something extraordinary had happened,” Prof. Dr. Friedrich Wagner recalled, who was responsible for this area of research at ASDEX at the time. At first on this 4 February 1982, many believed that they were dealing with “dirty discharges” and large sawtooths, i.e. internal energy relaxations. In fact, Prof. Wagner and his colleagues at the Max Planck Institute for Plasma Physics (IPP) in Garching made one of the most important discoveries in nuclear fusion research to date: they found the H-mode.

The corresponding article appeared in the journal “Physical Review Letters” 40 years ago, on 8 November 1982. It ended a long phase of stagnation and disappointment in the fusion community about the usefulness of neutral beam heating. It is true that in the 1970s researchers had been able to heat plasmas to remarkable ion temperatures of seven kiloelectronvolts, which briefly triggered a veritable euphoria. But it soon turned out that the high plasma temperatures were bought by a decrease in energy confinement. It was like heating a room vigorously while simultaneously opening the windows. This plasma behaviour posed a threat to the further development of a fusion power plant.

Today, this unfavourable operating state is called L-mode (Low-Confinement Mode). Wagner’s discovery at ASDEX, the predecessor of the current Garching experiment ASDEX Upgrade, is called High-Confinement Mode, or H-mode for short. That this was actually a new plasma state was initially disputed. “I went to the Varenna Summer School in Italy in June 1982, where I presented our results publicly for the first time. American colleagues in particular spread the word afterwards that we were not measuring the plasma flow correctly in ASDEX,” Prof. Wagner stated, who later became director at IPP. It was only at the next important symposium in September in Baltimore that he convinced his colleagues after they had “grilled” him in an hour-long discussion beforehand. A little later, they too were able to produce the new plasma state in their facilities.

“The discovery of the H-mode is what made ITER possible in the first place,” Prof. Dr. Elisabeth Wolfrum explained, who continues research on the H-mode at IPP today. ITER, the largest fusion device in the world, is currently being built in Cadarache in southern France. It is designed to generate ten times more power from fusion plasma than is supplied in heating power. The fact that ITER is modelled on ASDEX and also ASDEX Upgrade is also due to the H-mode. This plasma state first appeared in ASDEX because the plasma in the donut-shaped vacuum vessel of the tokamak type was shaped for the first time not round, but pointed. Physicists call the tip the X-point. This is where excess energy is guided into the divertor, more or less the ash box of a fusion reactor. Today, this design is standard in all fusion facilities that use magnetic fields to confine the plasma.

Shortly after the discovery of the H-mode, it was shown at ASDEX why plasmas in this state can confine energy twice as well as in the L-mode. “A very effective insulating layer forms at the outer edge of the plasma,” Prof. Wolfrum explained. “The temperature difference between its outside and the side facing the plasma interior is several million degrees Celsius.” However, the physicists also discovered an unpleasant side effect of the H-mode: violent energy flares – called edge localised modes (ELMs) – occur at the plasma edge at regular intervals. “In ASDEX Upgrade, ELMs are tolerable, but in the much larger ITER they would be so strong that they would melt the wall of the vacuum vessel,” Prof. Wolfrum said. ITER is being built with four times the vessel radius of ASDEX Upgrade, which would probably result in ELM energies ten to 15 times as strong as in ASDEX Upgrade. Therefore, suppression of these perturbations is one of the most important areas of research in fusion physics.

Central questions concerning H-mode are still unanswered 40 years after its discovery. For example: How exactly can the transition from L-mode to H-mode be explained physically? Or: How thick is the insulation layer, the edge transport barrier? There is still no numerical model that can completely represent the H-mode. So far, theorists have to feed their computer codes with certain initial assumptions to calculate individual phenomena of the H-mode. What they have not yet succeeded in doing is programming a model in which the transition from L-mode to H-mode follows quasi inevitably from physics. With such a model, it would then also be possible to predict the accessibility of the H-mode and the parameters of the ELMs in the not yet completed ITER experiment.

In search of the perfect numerical model

This perfect code would have to combine three physical approaches to plasmas: neoclassical transport, magnetohydrodynamics (see explanations below) and turbulence-focused models. Current codes tend to focus on one of these approaches and, even with this simplification, often keep the world’s best supercomputers busy for months answering limited questions. But the models are getting better and the computers are getting faster.

Two numerical, non-linear models in particular are in use at IPP, both of which are being further developed by international teams with IPP’s participation:

– JOREK is based on the magnetohydrodynamic equations.
– GENE focuses on micro-turbulences in plasmas.

“Through the interplay of experiments and computer models, we have learned a lot in understanding the H-mode in recent years,” explains Wolfrum. “The theorists compare our experimental results with their numerical models, incorporate necessary physical refinements and thereby in turn obtain results that point us in the direction of new experiments.”

These also always involve adjusting the parameters of plasma density, temperature and magnetic field, which ultimately determine the movement of the particles in the plasma and produce certain modes, i.e. operating modes. Because measurement technology has improved rapidly over the last four decades, plasmas can now be measured more precisely than when the H-mode was discovered, which helps to better describe and understand the plasma state.

What researchers now know: the plasma flows with different velocities at the edge, and it is these flow shears that play a decisive role in the formation of the edge transport barrier. They reduce turbulence at the plasma edge and thus lead to the specific properties of the H-mode

Strategies for suppressing eruptions at the plasma edge

Science has also recently made great strides in the suppression of large edge localised modes called Type-I ELMs. There are two promising strategies against the large energy eruptions:

1. Weak magnetic pertubation fields can completely eliminate ELMs in the best case. In this method, the otherwise completely axisymmetric magnetic field to confine the plasma is slightly deformed, which, however, reduces the energy confinement time by 10 to 20 percent. Since 2011, the IPP has been researching at ASDEX Upgrade how these pertubation fields must be placed. This method is particularly effective for low plasma densities at the edge. the pertubation fields amount to one part per thousand of the strong toroidal field.

2. The formation of large Type I ELMs can also be prevented by promoting the formation of smaller harmless ELMs. To do this, the otherwise elliptical shape of the plasma cross-section is deformed in the direction of a rounded triangle with the help of magnets. The plasma density at the edge is increased. By selectively blowing more particles into the plasma from the outside, small plasma eruptions then occur at the edge several thousand times per second, which are so benign that they cannot endanger the vessel wall.

“Through H-mode research, we are getting closer and closer to plasma operating states that are most suitable for large fusion facilities like ITER,” Prof. Elisabeth Wolfrum summarised. The now emeritus H-mode discoverer Prof. Friedrich Wagner is excited about the completely new possibilities that the fusion facility in southern France will offer once it is completed: “ITER will be an instrument like we’ve never had on Earth before.” From his work on ASDEX – and especially from the H-mode year 1982 – he has learned one thing: “Progress does not always develop linearly. In between, there are completely unexpected big leaps forward. That’s what makes science so exciting.”
Frank Fleschner

Picture description:
Computer simulation of a Type I ELM lasting 500 microseconds. The image shows a cross-section through the donut-shaped vacuum vessel of a tokamak. Recurrent eruptions form at the edge of the fusion plasma at regular intervals. These ELMs occur when the plasma is operated in the H-mode. The figure is based on calculations with the code JOREK in the publication of A. Cathey et al 2020 Nucl. Fusion 60 124007
(Graphic: A. Cathey, M. Hoelzl/Max Planck Institute for Plasma Physics)

Background information:
Neoclassical transport models: the charged particles in a plasma collide with each other, so that they are deflected from the paths to which, in the undisturbed state, the applied magnetic fields would force them. The specially shaped fields in tokamaks typically result in banana-shaped paths. Numerical models on this basis calculate the path of individual particles and, collectively, the heat losses from the plasma.

Magnetohydrodynamics: In this research field, the interaction of the applied magnetic field with electric fields of the particles in the plasma is calculated using a macroscopic approach. Instead of looking at individual orbits, the focus here is on average values. The plasma is viewed more or less like a fluid.