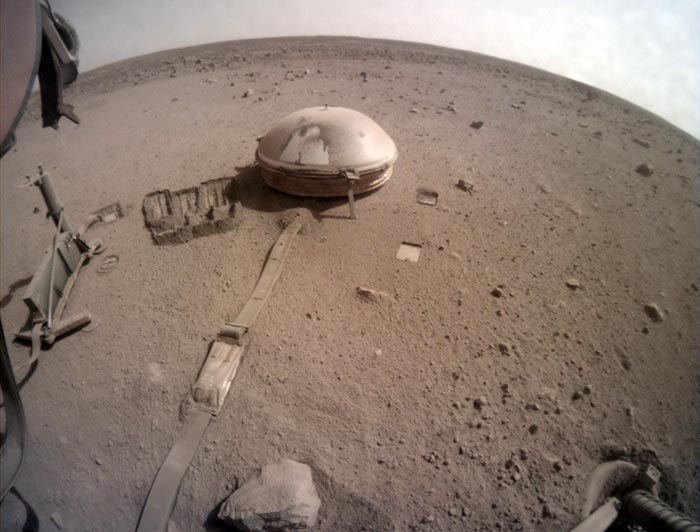 Physics connects seismic data to properties of rocks and sediments.

A new analysis of seismic data from NASA’s Mars InSight mission has revealed a couple of surprises.

The first surprise: the top 300 meters of the subsurface beneath the landing site near the Martian equator contains little or no ice.

“We find that Mars’ crust is weak and porous. The sediments are not well-cemented. And there’s no ice or not much ice filling the pore spaces,” said geophysicist Vashan Wright of Scripps Institution of Oceanography at the University of California San Diego. Wright and three co-authors published their analysis in Geophysical Research Letters.

“These findings don’t preclude that there could be grains of ice or small balls of ice that are not cementing other minerals together,” said Wright. “The question is how likely is ice to be present in that form?”

The second surprise contradicts a leading idea about what happened to the water on Mars. The red planet may have harbored oceans of water early in its history. Many experts suspected that much of the water became part of the minerals that make up underground cement.

“If you put water in contact with rocks, you produce a brand-new set of minerals, like clay, so the water’s not a liquid. It’s part of the mineral structure,” said study co-author Michael Manga of the University of California Berkeley. “There is some cement, but the rocks are not full of cement.”

“Water may also go into minerals that do not act as cement. But the uncemented subsurface removes one way to preserve a record of life or biological activity,” Wright said. Cements by their very nature hold rocks and sediments together, protecting them from destructive erosion.

The lack of cemented sediments suggests a water scarcity in the 300 meters below InSight’s landing site near the equator. The below-freezing average temperature at the Mars equator means that conditions would be cold enough to freeze water if it were there.

Many planetary scientists, including Manga, have long suspected that the Martian subsurface would be full of ice. Their suspicions have melted away. Still, big ice sheets and frozen ground ice remain at the Martian poles.

“As scientists, we’re now confronted with the best data, the best observations. And our models predicted that there should still be frozen ground at that latitude with aquifers underneath,” said Manga, professor and chair of Earth and planetary science at UC Berkeley.

The InSight spacecraft landed on Elysium Planitia, a flat, smooth, plain near the Martian equator, in 2018.  Its instruments included a seismometer that measures vibrations caused by marsquakes and crashing meteorites.

Scientists can tie this information to a huge mass of knowledge about the surface, including images of Martian landforms and temperature data. The surface data suggested that the subsurface might consist of sedimentary rock and lava flows. Still, the team had to account for uncertainties about subsurface properties such as porosity and mineral content.

Seismic waves from marsquakes provide clues to the nature of the materials they travel through. Possible cementing minerals—such as calcite, clay, kaolinite, and gypsum—affect seismic velocities. Wright’s team at Scripps Oceanography applied rock physics computer modeling to interpret the velocities derived from the InSight data.

“We ran our models 10,000 times each to get the uncertainties incorporated into our answers,” said co-author Richard Kilburn, a graduate student working in the Scripps Tectonorockphysics Lab  led by Wright. Simulations showing a subsurface consisting mostly of uncemented material best fit the data.

Scientists want to probe the subsurface because if life exists on Mars, that is where it would be. There is no liquid water on the surface, and subsurface life would be protected from radiation. Following a sample-return mission, a NASA priority for the next decade is the Mars Life Explorer mission concept. The goal is to drill two meters into the Martian crust at high latitude to search for life where ice, rock, and the atmosphere come together.

“All my life growing up, I’ve heard the Earth may become uninhabitable,” said study co-author Jhardel Dasent, another graduate student in the lab Wright leads. “I’m at the age now where I can contribute to producing the knowledge of another planet that may get us there.”

This research was funded by the National Science Foundation, NASA, and the CIFAR Earth 4D program.