In SOHO&#146;s pictures, watch a comet passing near the Sun 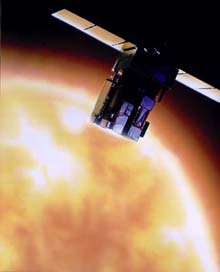 SOHO is a project of international cooperation between ESA and NASA. SOHO’s science ranges from the Sun’s hot interior, through its visible surface and stormy atmosphere, and out to distant regions where the wind from the Sun battles with a breeze of atoms coming from among the stars. <br>Credits: ESA

Between now and Saturday, 20 April, you can follow via the Internet the progress of the new-found Comet SOHO-422. Usually, comets seen by the SOHO spacecraft quickly burn up in the Sun’s hot atmosphere. This one won’t, so there is still time to monitor its progress.

Like most of the hundreds of comets found with the ESA-NASA sun-watching spacecraft, SOHO-422 was first noticed by an amateur astronomer. Pictures from SOHO are made available, freely and rapidly, on the Internet. People all around the world look especially at images from the LASCO C3 instrument, which covers the widest region of space, hoping for the honour of winning the race to spot the next incoming comet.

In this case XingMing Zhou of China was the sharp-eyed discoverer of what is officially designated as Comet 2002 G3 (SOHO). An animation of successive images of the comet shows it entering from the bottom left and following a curved track upwards. It passed behind a pillar that holds the mask blocking direct sunlight.

This morning, 17 April, the comet made its closest approach to the Sun. In the next few days it will continue upwards and to the right before moving out of the field of view.

Caution: This comet is visible only with SOHO’s special equipment. Do NOT try to see it by looking at the Sun for yourself — the brightness will damage your eyes!

SOHO is a project of international cooperation between ESA and NASA. The spacecraft was built in Europe for ESA, equipped with instruments by teams of scientists in Europe and the USA, and launched by NASA December 1995.