Discovery By UCSD Astronomers Poses A Cosmic Puzzle: Can A &#146;Distant&#146; Quasar Lie Within A Nearby Galaxy? 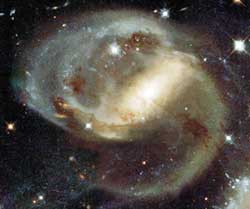 
The team’s findings, which were presented today in San Diego at the January meeting of the American Astronomical Society and which will appear in the February 10 issue of the Astrophysical Journal, raise a fundamental problem for astronomers who had long assumed that the “high redshifts” in the light spectra of quasars meant these objects were among the fastest receding objects in the universe and, therefore, billions of light years away.

“Most people have wanted to argue that quasars are right at the edge of the universe,” said Geoffrey Burbidge, a professor of physics and astronomer at the University of California at San Diego’s Center for Astrophysics and Space Sciences and a member of the team. “But too many of them are being found closely associated with nearby, active galaxies for this to be accidental. If this quasar is physically associated with this galaxy, it must be close by.”

Astronomers generally estimate the distances to stellar objects by the speed with which they are receding from the earth. That recession velocity is calculated by measuring the amount the star’s light spectra is shifted to the lower frequency, or red end, of the light spectrum. This physical phenomenon, known as the Doppler Effect, can be experienced by someone standing near train tracks when the whistle or engine sounds from a moving train becomes lower in pitch, or sound frequency, as the train travels past.

Astronomers have used redshifts and the known brightness of stars as fundamental yardsticks to measure the distances to stars and galaxies. However, Burbidge said they have been unable to account for the growing number of quasi-stellar objects, or quasars—intense concentrations of energy believed to be produced by the swirling gas and dust surrounding massive black holes—with high redshifts that have been closely associated with nearby galaxies. “If it weren’t for this redshift dilemma, astronomers would have thought quasars originated from these galaxies or were fired out from them like bullets or cannon balls,” he added.

The discovery reported by the team of astronomers, which includes his spouse, E. Margaret Burbidge, another noted astronomer and professor of physics at UCSD, is especially significant because it is the most extreme example of a quasar with a very large redshift in a nearby galaxy. “No one has found a quasar with such a high redshift, with a redshift of 2.11, so close to the center of an active galaxy,” said Geoffrey Burbidge.

Margaret Burbidge, who reported the team’s finding at the meeting, said the quasar was first detected by the ROSAT X-ray satellite operated by the Max-Planck Institute for Astrophysics in Garching, Germany and found to be closely associated with the nucleus of the spiral galaxy NGC 7319. That galaxy is unusual because it lies in a group of interacting galaxies called Stephan’s Quintet.

Using a three-meter telescope operated by the University of California at Lick Observatory in the mountains above San Jose and the university’s 10-meter Keck I telescope on Mauna Kea in Hawaii, she and her team measured the redshifts of the spiral galaxy and quasar and found that the quasar appears to be interacting with the interstellar gas within the galaxy.

Because quasars and black holes are generally found within the most energetic parts of galaxies, their centers, the astronomers are further persuaded that this particular quasar resides within this spiral galaxy. Geoffrey Burbidge added that the fact that the quasar is so close to the center of this galaxy, only 8 arc seconds from the nucleus, and does not appear to be shrouded in any way by interstellar gas make it highly unlikely that the quasar lies far behind the galaxy, its light shining through the galaxy near its center by “an accident of projection.” “If this quasar is close by, its redshift cannot be due to the expansion of the universe,” he adds. “If this is the case, this discovery casts doubt on the whole idea that quasars are very far away and can be used to do cosmology.”

Other members of the team, besides Geoffrey and Margaret Burbidge, included Vesa Junkkarinen, a research physicist at UCSD; Pasquale Galianni of the University of Lecce in Italy; and Halton Arp and Stefano Zibetti of the Max-Planck Institute for Astrophysics in Garching, Germany.