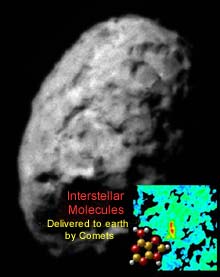 A photo of the nucleus of comet Wild-2 observed by the STARDUST spacecraft Jan. 2, 2004 (image courtesty of NASA-JPL). Inset (lower right) is a secondary image (green/blue) of an interplanetary dust particle (IDP) with a 15 nitrogen-enriched and 13 carbon-depleted (red/yellow) "hotspot" containing similar atomic interstellar molecules.The adenine molecule (N5C5H5) is one possible carrier of the 13 carbon and 15 nitrogen anomalies. Cometary IDPs were likely a major source of organic matter accreted by the prebiotic earth. <br>

Scientists from Lawrence Livermore National Laboratory and Washington University have seen carbon and nitrogen anomalies on a particle of interplanetary dust that provides a clue as to how interstellar organic matter was incorporated into the solar system.

Interplanetary dust particles (IDPs) gathered from the Earth’s stratosphere are complex collections of primitive solar system material and carry various isotopic anomalies. Using an ion microprobe that allows isotopic imaging at a scale of 100 nanometers, the astrophysicists conducted simultaneous carbon and nitrogen isotopic imaging measurements of the IDP, nicknamed Benavente. They noticed that the isotope carbon 13 decreased while nitrogen 15 increased in Benavente.

The results appear in the Feb. 27 issue of the journal Science.

Interstellar molecular clouds are the principal formation sites of organic matter in the Milky Way. A variety of simple molecules are produced in dense cold clouds. At such low temperatures, where the difference in chemical binding energy exceeds thermal energy, mass fractionation produces molecules with isotopic ratios that can be very different from molecules found on Earth.

These anomalies may provide a fingerprint for how abiotic interstellar organic matter was incorporated into the solar system.

The authors concluded that the observation of correlated carbon and nitrogen anomalies establishes that IDPs contain heteroatomic organic compounds of presolar interstellar origins that are more complex than the simple compounds implied by earlier measurements. During the prebiotic period, Earth may have accreted as much as a centimeter of abiotic carbonaceous matter every million years, much of it settling to the surface within small, high-surface-area IDPs. “This constant flux of particulate organic matter continues to be delivered to the surface of terrestrial planets today and includes hetero-atomic interstellar molecules such as those found in Benavente. It is not unreasonable to speculate that heteroatomic interstellar molecular matter may be relevant to the origins of life on earth” said John Bradley, director of Livermore’s Institute for Geophysics and Planetary Physics and one of the authors of the paper. Other Livermore authors include Zurong Dai, Sasa Bajt and Giles Graham.