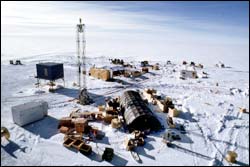 Scientists with the National Science Foundation-funded AMANDA Telescope project work at this South Pole research station. Their neutrino detectors are sunk more than one-and-a-half kilometers beneath the ice. <br>Photo by: Robert Morse

A novel telescope that uses the Antarctic ice sheet as its window to the cosmos has produced the first map of the high-energy neutrino sky.

The map, unveiled for astronomers here today (July 15) at a meeting of the International Astronomical Union, provides astronomers with their first tantalizing glimpse of very high-energy neutrinos, ghostly particles that are believed to emanate from some of the most violent events in the universe – crashing black holes, gamma ray bursts, and the violent cores of distant galaxies.

“This is the first data with a neutrino telescope with realistic discovery potential,” says Francis Halzen, a University of Wisconsin-Madison professor of physics, of the map compiled using AMANDA II, a one-of-a-kind telescope built with support from the National Science Foundation (NSF) and composed of arrays of light-gathering detectors buried in ice 1.5 kilometers beneath the South Pole. “To date, this is the most sensitive way ever to look at the high-energy neutrino sky,” he says.

The ability to detect high-energy neutrinos and trace them back to their points of origin remains one of the most important quests of modern astrophysics.

Because cosmic neutrinos are invisible, uncharged and have almost no mass, they are next to impossible to detect. Unlike photons, the particles that make up visible light, and other kinds of radiation, neutrinos can pass unimpeded through planets, stars, the vast magnetic fields of interstellar space and even entire galaxies. That quality – which makes them very hard to detect – is also their greatest asset because the information they harbor about cosmologically distant and otherwise unobservable events remains intact.

The map produced by AMANDA II is preliminary, Halzen emphasizes, and represents only one year of data gathered by the icebound telescope. Using two more years of data already harvested with AMANDA II, Halzen and his colleagues will next define the structure of the sky map and sort out potential signals from statistical fluctuations in the present map to confirm or disprove them.

The significance of the map, according to Halzen, is that it proves the detector works. “It establishes the performance of the technology,” he says, “and it shows that we have reached the same sensitivity as telescopes used to detect gamma rays in the same high-energy region” of the electromagnetic spectrum. Roughly equal signals are expected from objects that accelerate cosmic rays, whose origins remain unknown nearly a century after their discovery.

Sunk deep into the Antarctic ice, the AMANDA II (Antarctic Muon and Neutrino Detector Array) Telescope is designed to look not up, but down, through the Earth to the sky in the Northern Hemisphere. The telescope consists of 677 glass optical modules, each the size of a bowling ball, arrayed on 19 cables set deep in the ice with the help of high-pressure hot-water drills. The array transforms a cylinder of ice 500 meters in height and 120 meters in diameter into a particle detector.

The glass modules work like light bulbs in reverse. They detect and capture faint and fleeting streaks of light created when, on occasion, neutrinos crash into ice atoms inside or near the detector. The subatomic wrecks create muons, another species of subatomic particle that, conveniently, leaves an ephemeral wake of blue light in the deep Antarctic ice. The streak of light matches the path of the neutrino and points back to its point of origin.

Because it provides the first glimpse of the high-energy neutrino sky, the map will be of intense interest to astronomers because, says Halzen, “we still have no clue how cosmic rays are accelerated or where they come from.”

The fact that AMANDA II has now identified neutrinos up to one hundred times the energy of the particles produced by the most powerful earthbound accelerators raises the prospect that some of them may be kick-started on their long journeys by some of the most supremely energetic events in the cosmos. The ability to routinely detect high-energy neutrinos will provide astronomers not only with a lens to study such bizarre phenomena as colliding black holes, but with a means to gain direct access to unedited information from events that occurred hundreds of millions or billions of light years away and eons ago.

“This map could hold the first evidence of a cosmic accelerator,” Halzen says. “But we are not there yet.”

The hunt for sources of cosmic neutrinos will get a boost as the AMANDA II Telescope grows in size as new strings of detectors are added. Plans call for the telescope to grow to a cubic kilometer of instrumented ice. The new telescope, to be known as IceCube, will make scouring the skies for cosmic neutrino sources highly efficient.

“We will be sensitive to the most pessimistic theoretical predictions,” Halzen says. “Remember, we are looking for sources, and even if we discover something now, our sensitivity is such that we would see, at best, on the order of 10 neutrinos a year. That’s not good enough.”