Home / Physics and Astronomy / Quantum sensor can detect electromagnetic signals of any frequency
22.06.2022 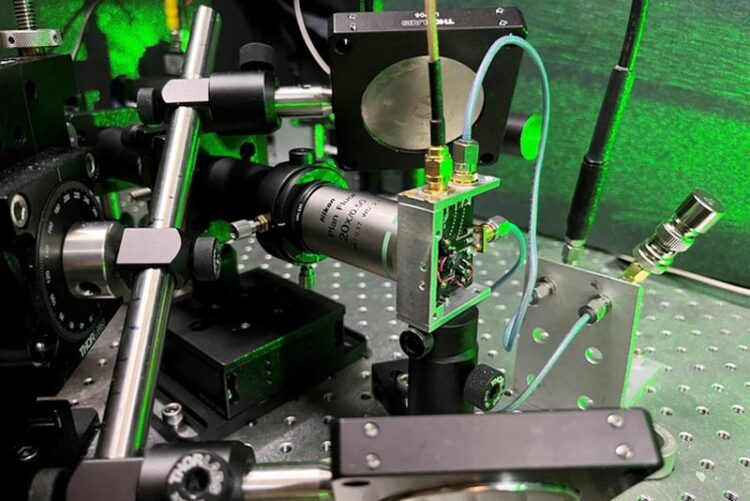 MIT researchers have developed a method to enable quantum sensors to detect any arbitrary frequency, with no loss of their ability to measure nanometer-scale features. Quantum sensors detect the most minute variations in magnetic or electrical fields, but until now they have only been capable of detecting a few specific frequencies, limiting their usefulness.
Credit: Guoqing Wang

MIT engineers expand the capabilities of these ultrasensitive nanoscale detectors, with potential uses for quantum computing and biological sensing.

Quantum sensors, which detect the most minute variations in magnetic or electrical fields, have enabled precision measurements in materials science and fundamental physics. But these sensors have only been capable of detecting a few specific frequencies of these fields, limiting their usefulness. Now, researchers at MIT have developed a method to enable such sensors to detect any arbitrary frequency, with no loss of their ability to measure nanometer-scale features.

The new method, for which the team has already applied for patent protection, is described in the journal Physical Review X, in a paper by graduate student Guoqing Wang, professor of nuclear science and engineering and of physics Paola Cappellaro, and four others at MIT and Lincoln Laboratory.

Quantum sensors can take many forms; they’re essentially systems in which some particles are in such a delicately balanced state that they are affected by even tiny variations in the fields they are exposed to. These can take the form of neutral atoms, trapped ions, and solid-state spins, and research using such sensors has grown rapidly. For example, physicists use them to investigate exotic states of matter, including so-called time crystals and topological phases, while other researchers use them to characterize practical devices such as experimental quantum memory or computation devices. But many other phenomena of interest span a much broader frequency range than today’s quantum sensors can detect.

The new system the team devised, which they call a quantum mixer, injects a second frequency into the detector using a beam of microwaves. This converts the frequency of the field being studied into a different frequency — the difference between the original frequency and that of the added signal — which is tuned to the specific frequency that the detector is most sensitive to. This simple process enables the detector to home in on any desired frequency at all, with no loss in the nanoscale spatial resolution of the sensor.

In their experiments, the team used a specific device based on an array of nitrogen-vacancy centers in diamond, a widely used quantum sensing system, and successfully demonstrated detection of a signal with a frequency of 150 megahertz, using a qubit detector with frequency of 2.2 gigahertz — a detection that would be impossible without the quantum multiplexer. They then did detailed analyses of the process by deriving a theoretical framework, based on Floquet theory, and testing the numerical predictions of that theory in a series of experiments.

While their tests used this specific system, Wang says, “the same principle can be also applied to any kind of sensors or quantum devices.” The system would be self-contained, with the detector and the source of the second frequency all packaged in a single device.

Wang says that this system could be used, for example, to characterize in detail the performance of a microwave antenna. “It can characterize the distribution of the field [generated by the antenna] with nanoscale resolution, so it’s very promising in that direction,” he says.

There are other ways of altering the frequency sensitivity of some quantum sensors, but these require the use of large devices and strong magnetic fields that blur out the fine details and make it impossible to achieve the very high resolution that the new system offers. In such systems today, Wang says, “you need to use a strong magnetic field to tune the sensor, but that magnetic field can potentially break the quantum material properties, which can influence the phenomena that you want to measure.”

The system may open up new applications in biomedical fields, according to Cappellaro, because it can make accessible a range of frequencies of electrical or magnetic activity at the level of a single cell. It would be very difficult to get useful resolution of such signals using current quantum sensing systems, she says. It may be possible using this system to detect output signals from a single neuron in response to some stimulus, for example, which typically include a great deal of noise, making such signals hard to isolate.

The system could also be used to characterize in detail the behavior of exotic materials such as 2D materials that are being intensely studied for their electromagnetic, optical, and physical properties.

In ongoing work, the team is exploring the possibility of finding ways to expand the system to be able to probe a range of frequencies at once, rather than the present system’s single frequency targeting. They will also be continuing to define the system’s capabilities using more powerful quantum sensing devices at Lincoln Laboratory, where some members of the research team are based.

The team included Yi-Xiang Liu at MIT and Jennifer Schloss, Scott Alsid and Danielle Braje at Lincoln Laboratory. The work was supported by the Defense Advanced Research Projects Agency (DARPA) and Q-Diamond.